New Pokemon Snap review: You know, I’m something of a photographer myself

The original Pokemon Snap is a title that I played very enthusiastically as a kid and still think about today. Even though it was a fairly short affair, I squeezed as much gameplay out of it as any person reasonably could have, determined to uncover its secrets and photograph every Pokemon in the game. At many times throughout the past, I’ve been expecting Nintendo to announce a sequel, but that announcement only recently came after literal decades if waiting. After waiting 22 years to play New Pokemon Snap, I can safely say that Nintendo made us wait far too long for a new entry in this delightful sub-series.

For the uninitiated, the original Pokemon Snap was a spin-off title that came early on in the series’ lifespan, during a time when there were still just 150 Pokemon. Pokemon Snap gave players a simple goal: take high-quality pictures of the Pokemon they encountered in the wild. The game took care of navigation, sending players through different courses with on-rails progression so they could focus entirely on setting up the perfect shots. It was an easy-to-play game that, for someone like me who was the perfect age when Pokemon Red and Blue came Stateside, was a ton of fun. 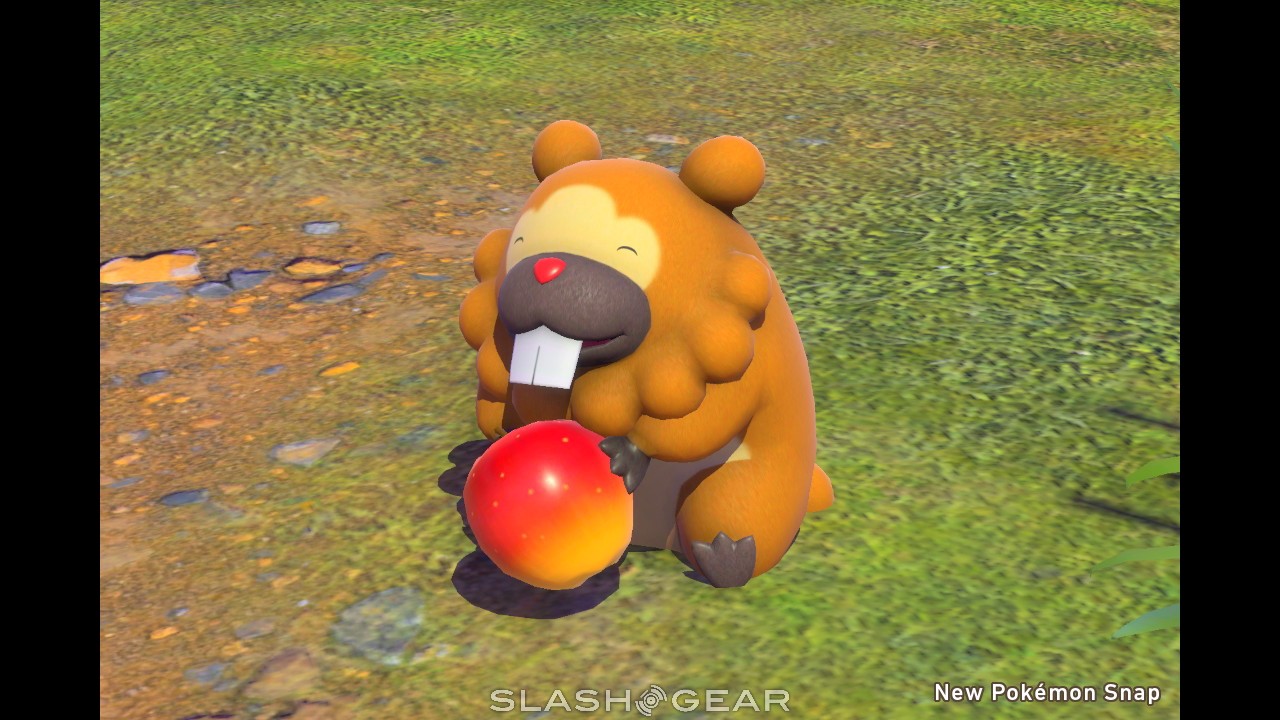 There are many more Pokemon to photograph in this outing, along with more courses to explore. Granted, New Pokemon Snap doesn’t come close to offering the entire Pokemon roster (for good reason), but courses definitely feel a lot more populated and full of life than they did in the original, and that’s definitely good thing.

As you did in the first Pokemon Snap, you’ve got a variety of tools at your disposal when it comes to coaxing Pokemon into the perfect pose. You can throw Fluffruit to draw Pokemon to a better position or throw new Illumina Orbs at them to see how they react to those. You also have the option of playing a melody for Pokemon as you pass by them, which replaces the Poke Flute from the original game. Even your camera’s scanner, which is primarily used for examining oddities in the environment and discovering/changing routes in course, can be used to catch the attention of nearby Pokemon. 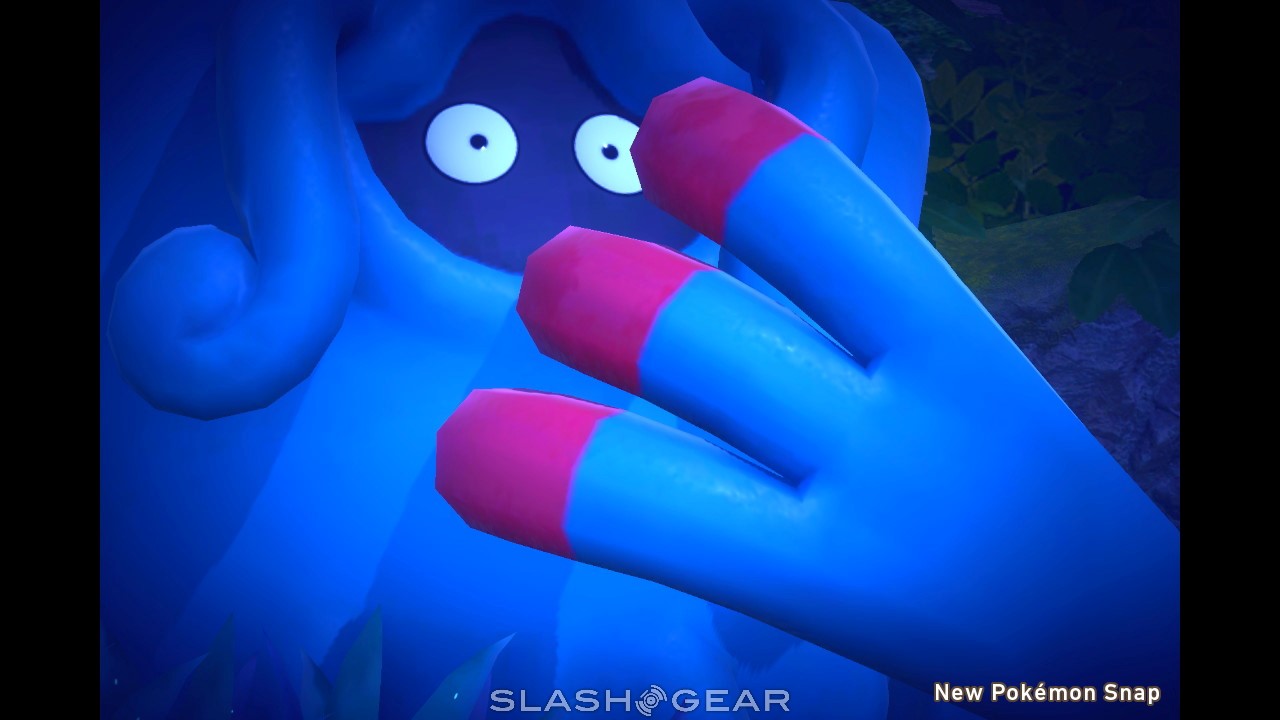 You unlock these tools as you play the game, which means that as you progress further, you ultimately obtain more options when it comes to interacting with Pokemon. This, in turn, means that you’re going to need to go through each course numerous times if you want to really get the best photographs.

The original Pokemon Snap operated in much the same way, only in New Pokemon Snap – which is an awful title that really shouldn’t have made it anywhere near the finished version of this game, but I digress – you also have research levels for each individual course changing what you see there. Your research level goes up as you take pictures in a given course, and Pokemon change with the research level. 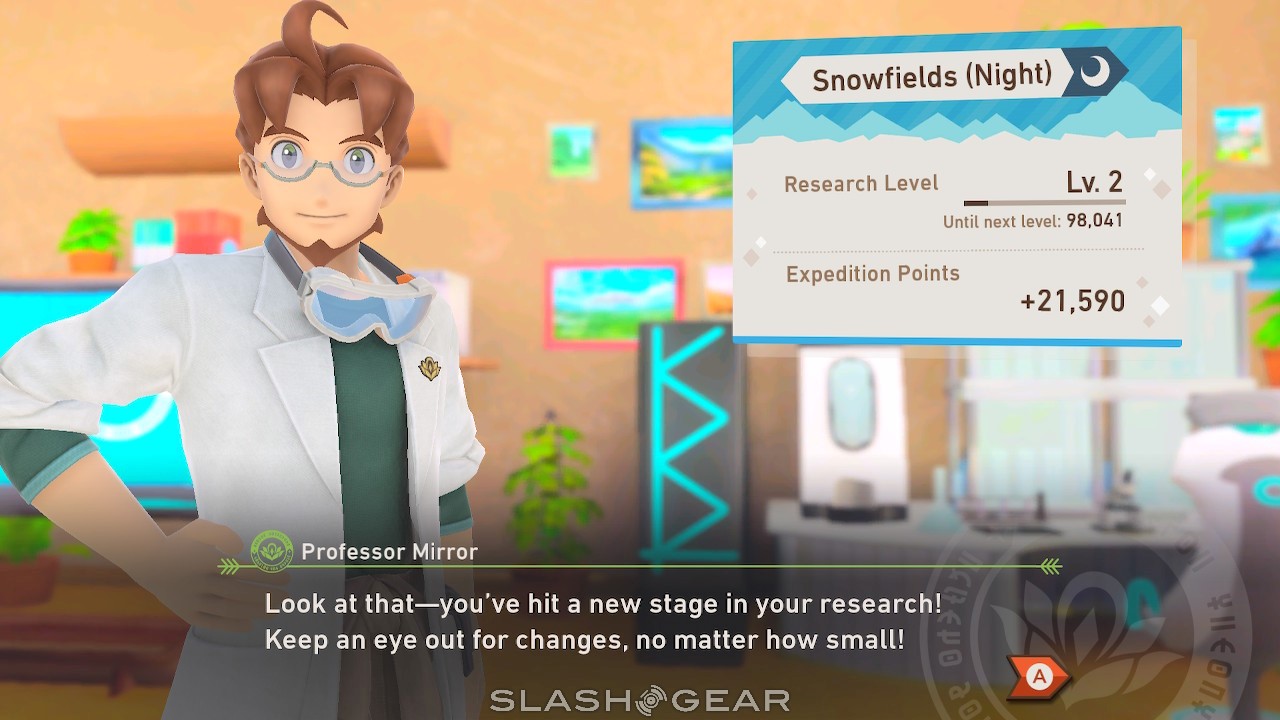 As with the first game, a Pokemon Professor will judge the quality of your images based on certain metrics, though unfortunately, fan favorite Professor Oak has been replaced by Professor Mirror for this outing. He’ll score your photos based on the pose the Pokemon is making; their size, placement, and direction within the frame; whether or not you captured any other Pokemon in the shot; and the background. The goal is to ultimately take photos that score well enough to earn you a diamond ranking, but it doesn’t just stop at taking one diamond-quality photo of the Pokemon. Photographs themselves are split into star rankings ranging from one to four stars, so to complete your Photodex, you’re going to need to take four diamond-quality photos of each Pokemon in the game. 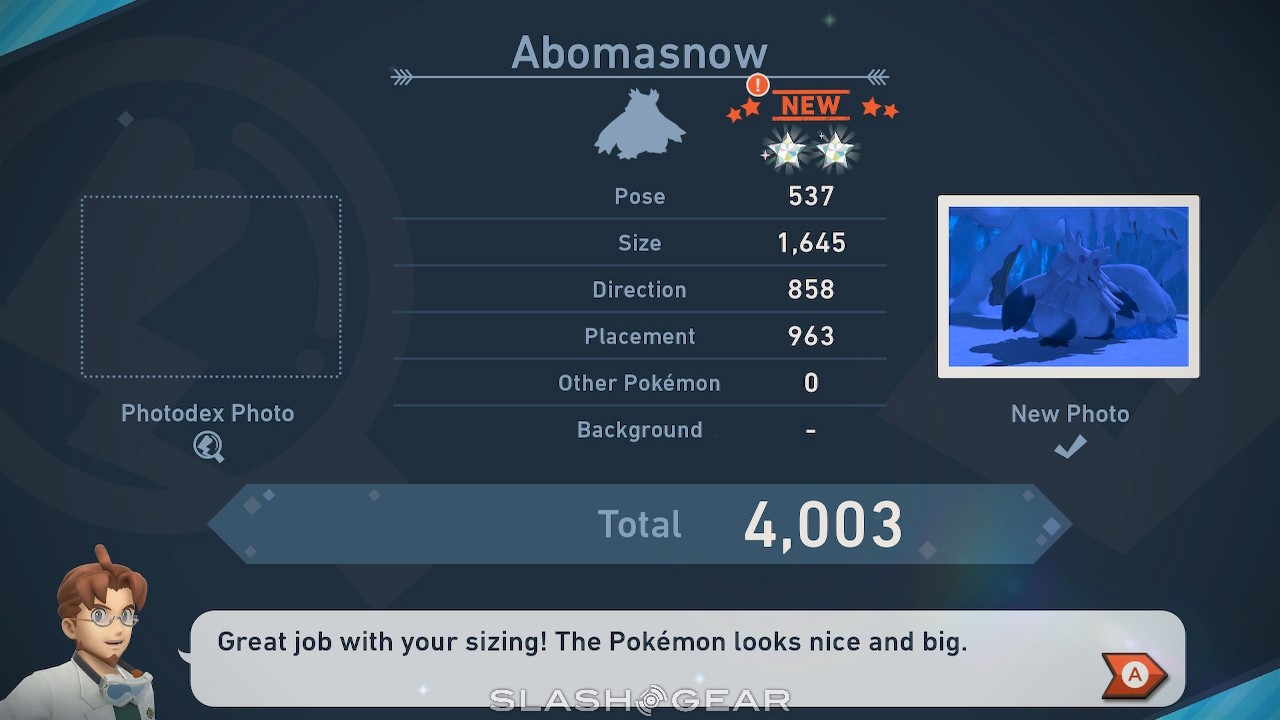 Most of the complaints I have about this game stem from this scoring process for one reason or another. For starters, photograph scoring can sometimes feel arbitrary. There are times where I felt like I photographed a Pokemon at a perfect moment, only to then get a low “Pose” score at rating. Thankfully, you don’t have to get perfect scores in each category to get diamond rankings, so there is a good amount of wiggle room there, but it can be deflating to see a photo that you think is excellent get an underwhelming score.

Those who are determined to get diamond-quality photos for each star tier are in for quite the grind too. It takes some trial and error to figure out what’s going to net you a score that’s high enough for the diamond ranking, and when you consider that at a certain point you’ll have to go through an entire course just to try to snap the perfect picture of a single Pokemon, the grind quickly becomes apparent. Even those who aren’t interested in chasing diamond-quality photos or a complete Photodex will find themselves running courses multiple times as they simply work their way through the core game. 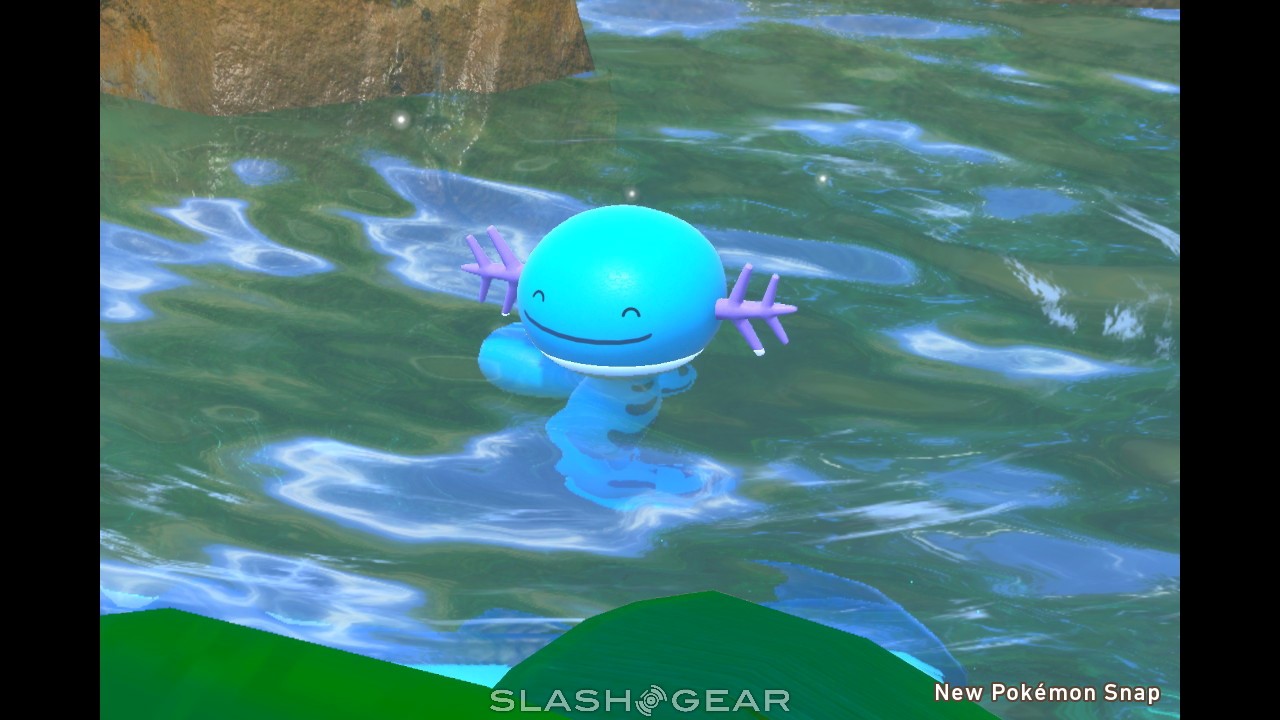 I don’t mind the grind – like I said, I played the original Pokemon Snap to death, which mostly involved playing the same courses over and over again in search of secrets or the perfect shot of specific Pokemon. I think the grind will be a turn off to some, and those who aren’t interested in padding out their Photodex may think that New Pokemon Snap is a little on the short side. It definitely isn’t as short as the original game was, and I was surprised to see how many different courses there are in this game (many with daytime and nighttime versions to boot), but it isn’t a particularly lengthy game for those who are looking to grind as little as possible.

Other than those complaints, though, I love this game. It’s a very relaxing game to play, and it’s a perfect pick up and play title that can be enjoyed even when you don’t have a ton of time to spare. It’s not a challenging game by any stretch of the imagination, so it’s a good pick for young children or adults who just want to kick their feet up and relax. It’s a feel-good title that can help lift your spirits at the end of a crappy day, and the world certainly needs more of those right now. 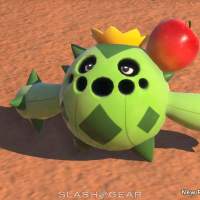 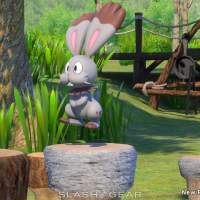 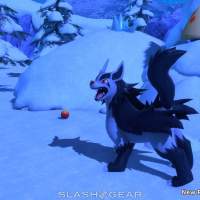 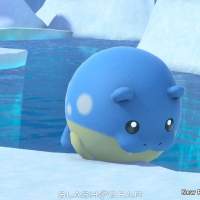 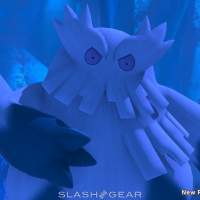 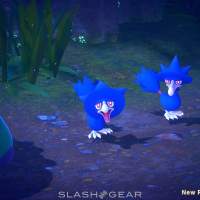 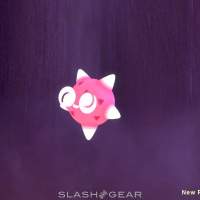 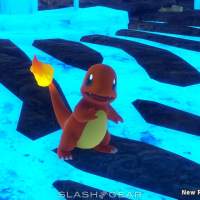 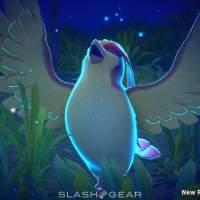 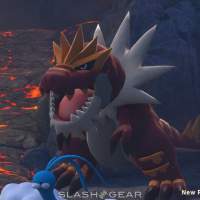 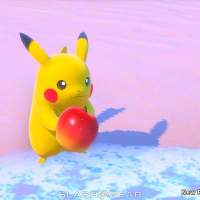 In fact, I had so much fun while I was playing New Pokemon Snap that I forgot to capture more than a few actual screenshots of it. So, instead of screenshots, I’ve embedded some of the photographs I snapped while playing throughout this article.

This review is shorter than most gaming reviews I write because there truthfully isn’t a whole lot to say about this game. New Pokemon Snap is just like the original Pokemon Snap, except this time around there’s more of pretty much everything – more Pokemon, more polygons, and more courses. 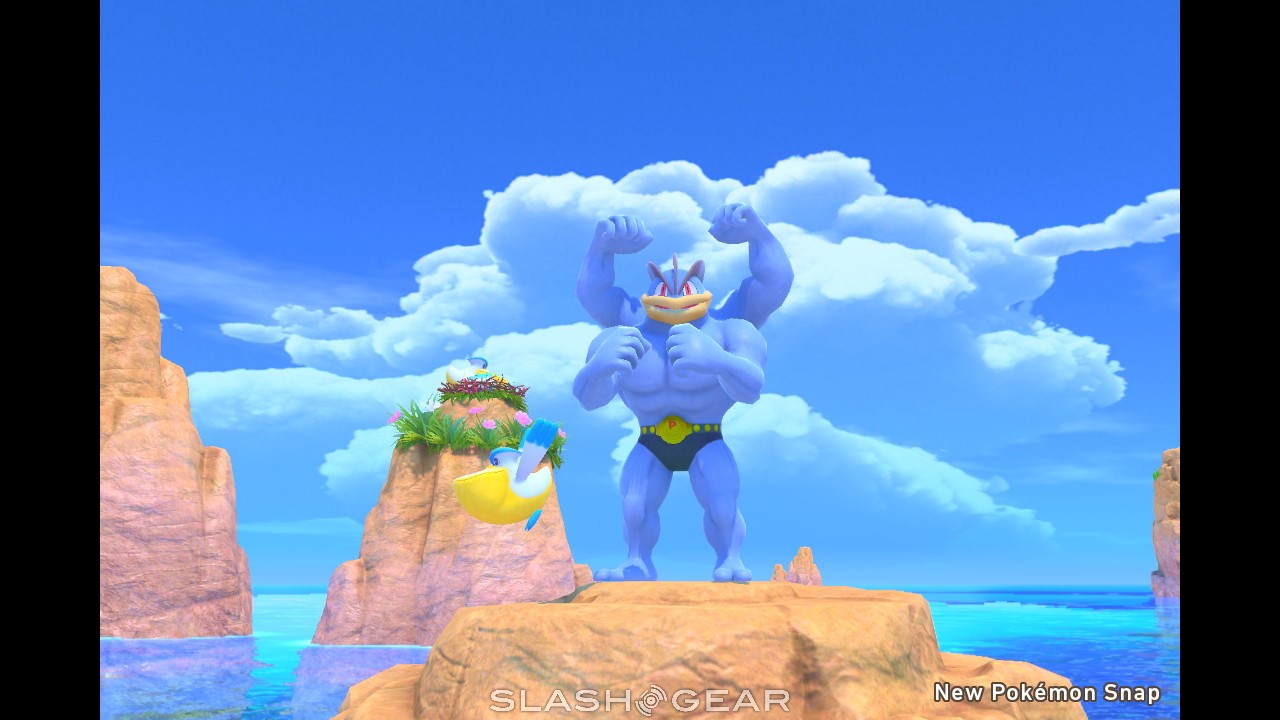 Therefore, if you’re like me and you loved the original, you’ll probably love New Pokemon Snap too. If you’re a parent to young children and want to get a game that you can both enjoy, New Pokemon Snap is a great choice. If you’ve never played the original but you love Pokemon, this is definitely worth adding to your library. Really the only people who should steer clear are those that are looking for a challenge, because there’s almost none to be found here, and those that hate the Pokemon franchise.

Does New Pokemon Snap meet 22 years of expectations? I think it does. I certainly had a blast with it, and I’m looking forward to returning to it to uncover all of its secrets. Here’s hoping it doesn’t take Nintendo another 22 years before they get us another Pokemon Snap game.