Apple announced a completely-redesigned iPod Nano last month during its iPhone 5 event where the company also launched a new iPod Touch. We already saw iFixit’s complete teardown of the new iPod Touch and the iPhone 5, so naturally it’s now the new iPod Nano’s turn up on the chopping block. And since the iPod Nano is so…nano-like, it doesn’t take long for the explorers at iFixit to dismantle the thing.

The new iPod Nano has a teeny-tiny 2.5-inch screen, so it almost looks like mini iPod Touch of sorts. Unlike most other Apple devices, the new iPod Nano is fairly easy to break into, requiring only a Phillips screwdriver and a wedge to take off the front display which reveals the innards of the device. 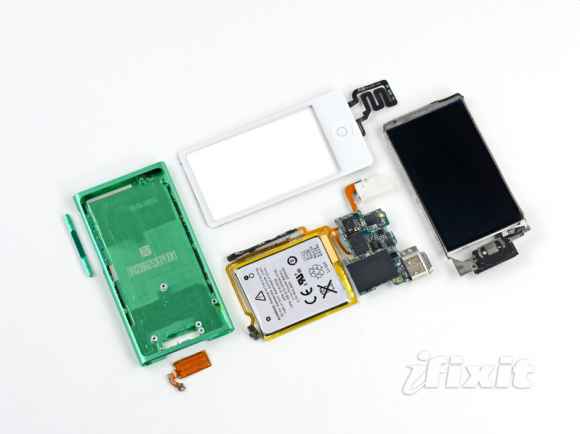 The display itself and the digitizer are not fused together, which would make repairing either components way less stressful. However, unlike the iPod Touch, the battery is adhered to the back of the display assembly and the wires are soldered to the logic board. There’s a convenient pull tab for the battery, but the adhesive turned out to be much too strong for a simple pull.

It’s not all fun and games, though. Apple ended up soldering a bunch of parts to the logic board, including the battery (as previously mentioned), Lightning connector, button cable, and headphone jack. iFixit gave it a repairability score of 5/10, which is better than the new iPod Touch, but it’s still not an easy task.