Developers having a peek at the newest build of iOS 6 have discovered a clue leading us to believe we’ve seen the first real vision of the HD display for the next iPhone, that being a rather tall 640 x 1136 pixel resolution. This set of numbers comes from the test build for iOS 6 which shows the possibility for such a build in a simulation done by 9to5mac. What they’ve done is essentially stretch out the display in a simulator to the proposed proportions and – poof – everything appears to fall right into place.

What you’re seeing above is a rendering of the next iPhone as done by the folks at NWE while below you’re seeing two screens in simulation mode in iOS 6.0 and iOS 5.1. The display on the left and the display on the right both have the same dimensions, but while the current build of iOS on the market today – iOS 5.1 – shows a slightly unflattering set of black rows sitting between icon sets, the iOS 6 build immediately has the icons locked in step with the lovely equidistant app arrangement we’ve grown used to. 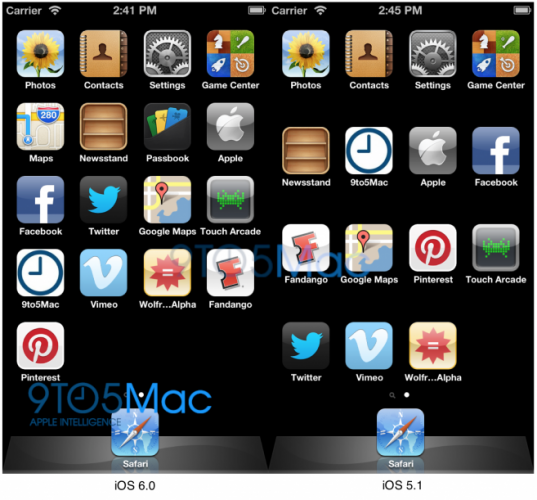 In the iPhone that’s currently on the market, there are four rows of icons above the dock. In this new build of iOS with a display that’s as tall as what’s been suggested in the code found in iOS 6 for the new iPhone, there are five rows of icons besides the dock. This plays right in-step with the idea that Apple does not want to radically change the way their device functions or how users interact with it, opting rather for an enlarged bit of hardware without a giant UI switch.

Have a peek at the timeline we’ve got below to check on other recent iPhone 5 findings – or “The New iPhone”, if you prefer – and stick around on SlashGear to keep the wave flying inward. Also note that we’ve got a New iPhone portal for you to ride the curl on in with as well. Let us know if you think the new iPhone will look like what’s suggested above, or if it’s all a bunch of smoke and mirrors for real!