Genesis is a luxury car maker with several models in its line. The automaker says that the new Genesis G70 lines all of its existing models with its current Athletic Elegance design philosophy. The vehicle has leading safety features and a driver-focused interior. One of the more interesting interior features is a 10.25-inch infotainment system that can receive wireless over the air updates.

The images seen here are the first look at the G70 ahead of its on-sale date in Korea next month. The automaker says the vehicle is a luxury sport sedan with an athletic design, dynamic driving performance, and leading safety features. It received the IIHS Topic Safety Pick+ designation.

The outside of the vehicle is redesigned with a signature crest grill set lower than the Quad Lamps that spread outward. Genesis says the design evokes a sprinters pre-race posture and highlights the car’s position as the most athletic sport sedan in the Genesis line. The car has side air extractors that are optimized for efficiency.

On the back of the car are Quad Lamp taillights inspired by the wings of the Genesis logo. The rear also has full-width G-Matrix mesh and body-colored diffusers surrounding the oval exhaust tips. The interior is meant to resemble a fighter jet cockpit and features the new 10.25-inch infotainment system mentioned before. 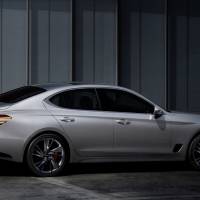 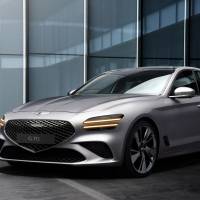 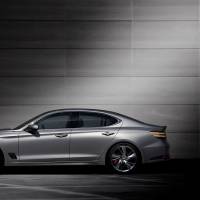 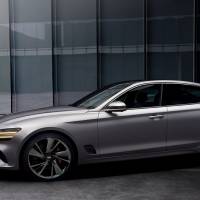 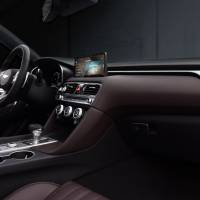 The infotainment system has an exclusive Genesis UI design that supports over the air updates via Wi-Fi, Valet mode, and Apple CarPlay. The wireless phone charging system is updated with a horizontal layout for more convenience for users with larger phones. There is no mention of the engine power rating in the Genesis announcement. The vehicle is expected to be available outside of Korea.