Batteries, already the Achilles heel of mobile devices, present an even bigger challenge for even smaller devices, like wearables and the budding Internet of Things industry. These latter devices are not things that you would, or should, associate with the frequent charging and battery replacement we are used to on smartphones. How do you balance performance and battery life? Atmel, a micro-controller manufacturer based in San Jose, may have the answer. Its new ultra-low power SAM L21 32-bit ARM-based MCU (micro controller unit) is advertised to last more than a decade before needing a recharge or replacement.

That kind of battery life will be critical for a certain class of devices that include sensors, wearable, and smart home appliances. The SAM L21 advertises a power draw of only 35 microamps per MHz when awake and an even smaller 200 nanoamps when asleep. In comparison, current low-power MCUs already eat up to 120 to 160 microamps per MHz. The difference it definitely substantial.

Aside from the low power consumption, the Atme, SAM L21 also offers a new unique feature called power domains, which are basically power profiles that turn certain chips or functionality, depending on the power state. Normally, controllers simply switch off all functionality in a low power or sleep state, except for the clock which is necessary to keep in sync with the world when it wakes up. With Atmel’s design, functionality can be gated away at certain tiers, allowing, for example, peripherals to continue working at a certain low power state. 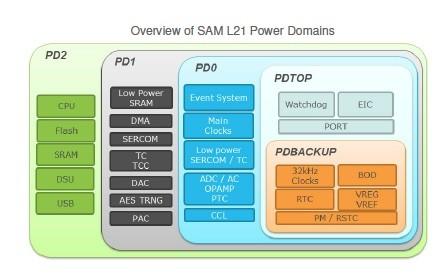 In terms of performance, the chip isn’t competing with high-end mobile processors. It only has, for example, a 42 MHz Cortex M0 CPU, which is the smallest 32-bit ARM core. It also only has provisions for 256 KB of flash memory and 32 KB of static RAM. Definitely not your run of the mill mobile processor but it’s still powerful enough to support physical and touch-based interfaces, run encryption programs, stream media, or communicate with other devices like in the case of chatty smart home appliances.

The Atmel SAM L21, now available for developers to play with in the form of the SAML21 Xplained Pro evaluation board, definitely has an interesting proposition. But the real test of Atmel’s performance will depend on vendor adoption in products. No date yet on when the chip will ship out to those manufacturers or for how much.