Turn down the lights and turn up the heat: it’s sexy time, and your thermostat is crooning Barry White songs at you. Controlling the temperature of your AC or heating is not usually something we give more than a few moments thought to, but if stealth startup Nest Labs – led by ex iPod chief Tony Fadell – has its way we’ll be cooing over a tactile, glowing eye, the Learning Thermostat, that responds not just to our prods and twists, but historic usage patterns and even weather forecasts.

Serenading you with back-catalog tracks from the Walrus of Love isn’t quite in the Learning Thermostat’s repertoire, but what it can do is arguably even more impressive. While traditional thermostats are generally ignored, the Nest team suggests, the current breed of smart thermostats – complete with features like web access and remote control – are simply too complex for most users to bother getting to grips with. That means, while they’re tremendously capable for those few who spend the time familiarizing their capabilities, most owners ending up wasting money because they hardly use them.

Instead, Nest co-founder (and fellow iPod team alumni) Matt Rogers told CNET, the Nest Learning Thermostat prioritizes ease of use and understanding. The front changes color from red – when the house is being heated – to blue – when it’s being cooled – and temperature is easily adjusted by rotating the jog-dial built into the casing. Pushing the front acts as a button, and there’s an iOS app already available along with an Android version in the pipeline; you can also track usage through your desktop browser. 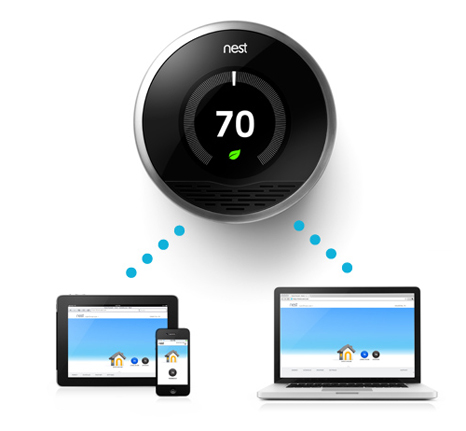 However, Nest reckons it’s the Learning Thermostat’s intelligence that will be giving you chills, not the temperature. The system observes your normal heating/cooling routines – using movement sensors, humidity and temperature sensors, and proximity control – and can mimic them itself, as well as automatically tweaking the settings when there’s nobody home. That takes about a week, Rogers claims. It can even pull in weather forecasts over WiFi to adjust temperatures automatically based on conditions outdoors: cranking up the aircon if the sun makes an appearance, for instance.

The Nest Learning Thermostat will go on sale priced at $249 in Best Buy midway through November, and is intended to be easily installed by the home owner (rather than demanding professional help). If that seems a lot for a fancy thermometer, Nest reckons that in a year it will pay for itself: saving 20- to 30-percent of the average $1,000 energy bill for the American home.