Nest has launched a quartet of new smart home products, with a new Nest Cam, Nest Doorbell, Nest Cam wired, and Nest Cam with Floodlight bringing revamped styling and more onboard-smarts. The redesigned range of home security devices include an uptick in onboard machine learning, allowing for data to be processed on-device rather than in the cloud.

That’s a double-advantage, the Google-owned company points out. On the one hand, it means more security: all footage, for example, is encrypted both in transit and at rest, and things like motion and person triggers are processed locally. At the same time, it also means that Nest can offer more advanced features – such as smarter notifications – without requiring a Nest Aware subscription. 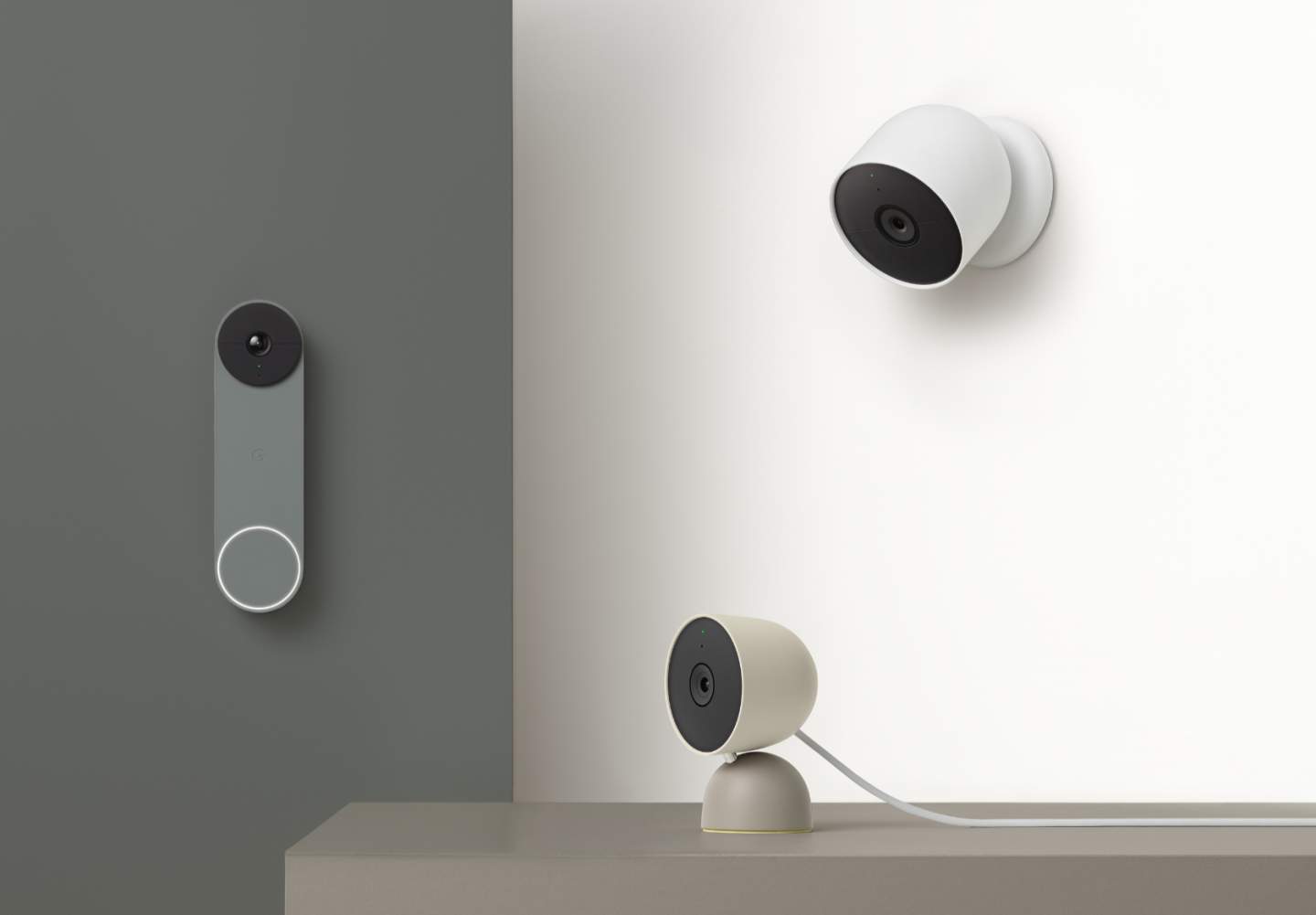 The new platform uses machine learning that runs on twice the number of pixels at double the frame rate as the old models. It can, for example, distinguish multiple objects at the same time, and tell the difference between things like moving and stationary vehicles, people and animals, packages, and more. It can ignore things like branches waving in the wind, so that the motion alerts – and recordings – you get are more useful.

Those notifications lead you to the Google Home app, where Nest is trying to shift users. Rather than in the Nest app, that’s where you’ll now find the Sightline 2.0 interface, the Home Feed with curated priority events – like package deliveries – together with a whole home history. There’s filtering, too, by type of event and more, along with activity zones which can be set up to only trigger alerts and recordings when movement and more is within those portions of the scene. As before, you get more functionality if you sign up to a Nest Aware or Nest Aware Plus subscription. 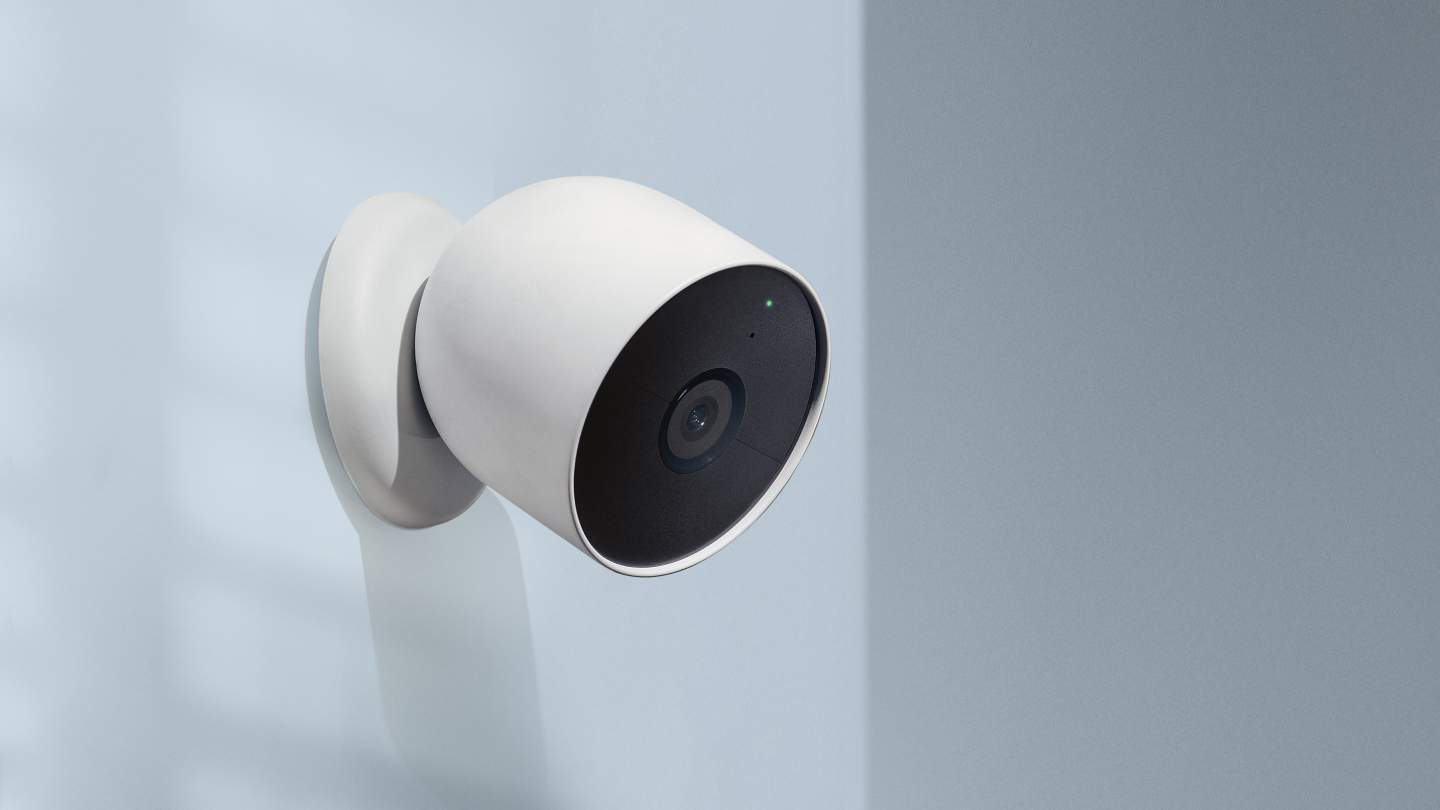 All four of the new models support features like HDR, which Nest says has been tuned here for sharper details across a range of environments. More useful still, there’s now support for recording up to an hour of local video. That means, even if your internet connection is down, the cameras will still capture footage. Nest says the offline storage is enough for about a week’s worth of events based on typical use, and they all get uploaded when the internet connection returns.

As for power, half of the new Nest models can be battery powered. There’s now a tab in the Google Home app, which shows the power remaining not only as a percentage but in days/weeks/months, making it easier to understand just how much charge is left. There are options to optimize battery life and limit notifications to certain activity zones, too, along with battery usage profile that balance power against performance. The Google Home app pings out notifications when it’s time to recharge, and can switch to an automatic battery saver mode when levels get low to coax out longer runtimes.

Nest’s new Doorbell is a sleeker, more easily-installed option than the outgoing model. Battery operate now, though with the option for a wired install if you have preexisting cabling, it’s more readily positioned on a door frame. Nest says the rechargeable battery is good for up to around two and a half months of typical use, based on around 13-16 events per day.

Out of the box, you’ll get four types of smart alerts: package, person, animal, and vehicle. There are also three hours of event history, and activity zones support. With a Nest Aware subscription you get Familiar Face Detection and 30 days of event history. The HDR camera supports a 6x zoom and has a taller 3:4 field of view to see things like packages that are close on the doorstep.

It’ll integrate with an existing chime, as well as ringing on your Nest speakers and smart displays. There are four colors – Snow, Ivy, Linen, and Ash – and Nest includes free theft replacement should someone other than the homeowner take advantage of the ease of removable form-factor. It’s priced at $179.99, and will go on sale August 24.

The new Nest Cam is designed to work either outdoors or indoors, and run on either battery or wired power. Even the stand is optional ($29.99), with the camera designed for wall-mounting too, and Nest has an optional solar panel for even more convenience in positioning. The whole thing is weatherproof – Nest says its magnetic mount withstood a category 2 wind – and has up to three months of battery life based on around 9-12 recorded events per day. 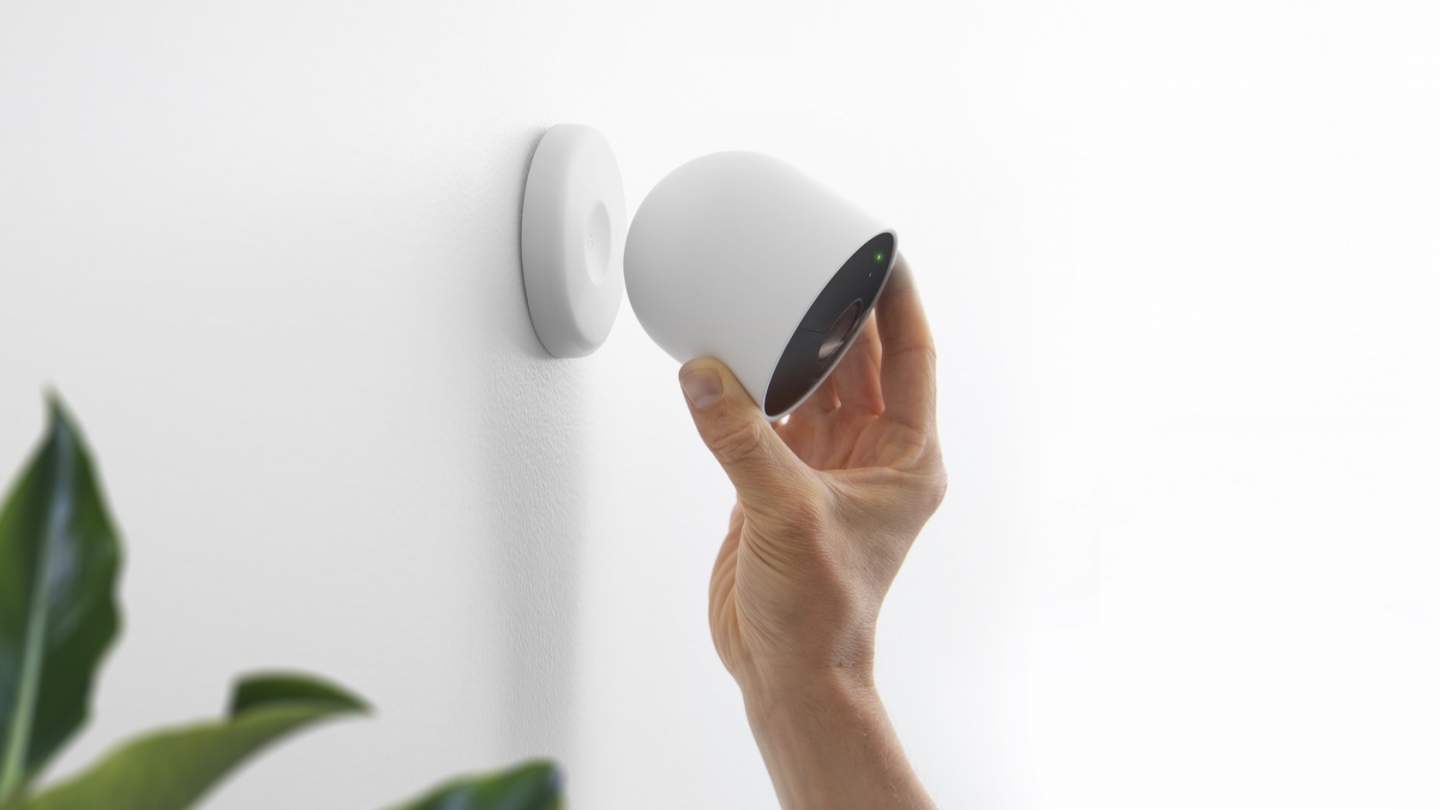 Out of the box there are three types of alert – person, vehicle, and animal – and Activity Zones, along with three hours of event video history. For more 1080p HDR recording you’ll need a Nest Aware subscription. 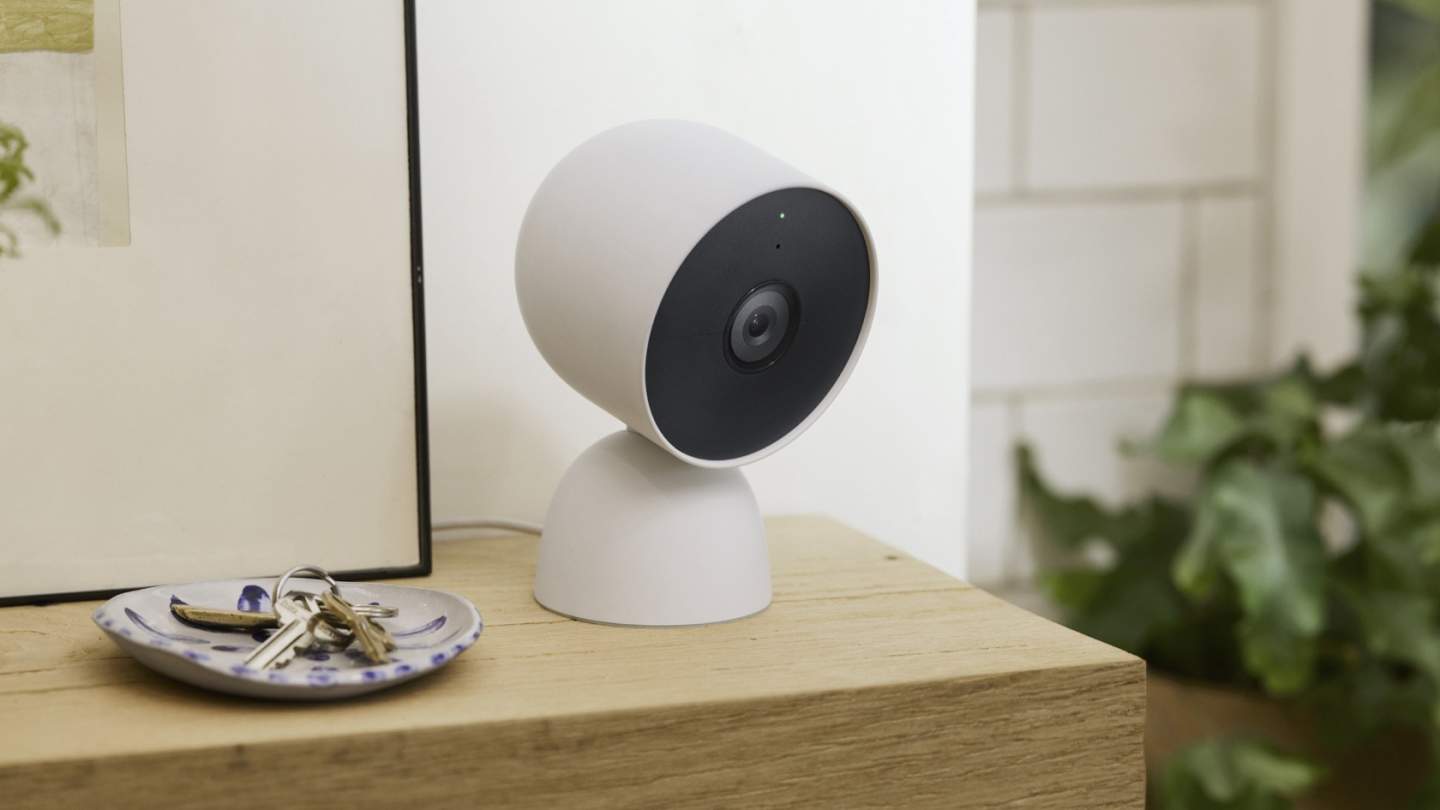 Nest’s first camera under $100, the Nest Cam (wired) is intended for indoor use only, and lacks the weatherproof rating of its siblings. It’s priced at $99.99, and comes in four colors, one with a real wooden base. 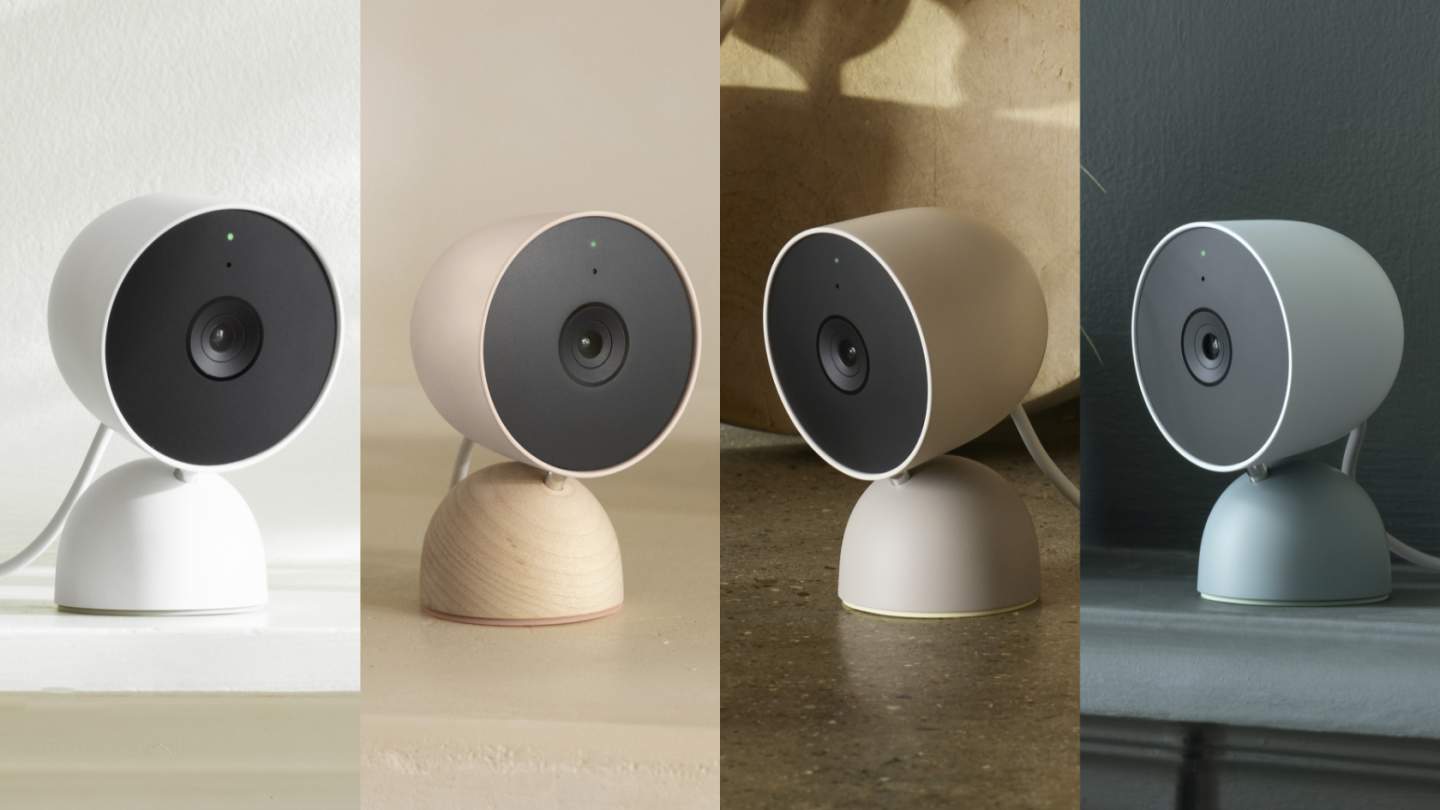 The cable is designed to snake down through the base to keep things sleek, and unlike the Nest Cam it’s wired-only. It’ll go on sale later in 2021.

Similar to the Nest Cam, in that it’s designed to be positioned outside, though reliant on wired connections like the Nest Cam Indoor, the Nest Cam with Floodlight is Nest’s first camera to include an LED security light. It can trigger those lights whenever the Nest Cam sees activity, based on the same criteria and on-device processing as are used for smart notifications.

That should mean fewer times when the lights turn on just because a tree moved in the wind, or a car drove past, while still adding security should someone walk down your driveway at night. It’s priced at $279.99, and Nest says it’s “coming soon.”