Neptune Pine review: big watch, or half a phone?

Smartwatches are all the rage, and Neptune Pine has been one that many have been anticipating for quite some time. Since its Kickstarter campaign, many have wondered if the be-all watch was worthy. Can an all-in-one watch provide enough reason to ditch your smartphone, or is it a step too far? Here’s our review, which aims to answer that very question.

Let’s get something straight, right from the jump: I’m not really sure this can be classified as a ‘smartwatch’. The Neptune Pine is massive as smartwatches go, and though I’ve taken a shot at smartwatch size before, this one makes the rest of the field look downright dainty. 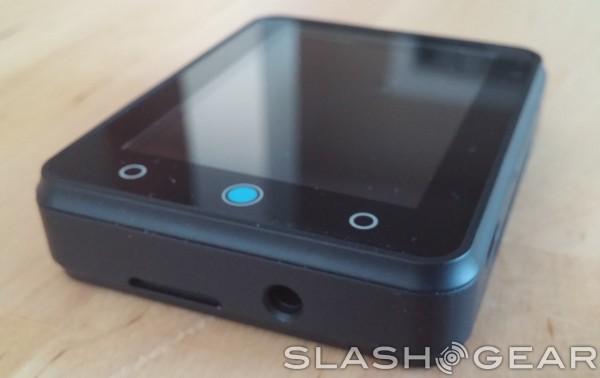 Even in pictures, it’s hard to adequately relay just how big this thing is. The best way I know to describe it as if an iPhone 5S were cut in half, then given a wrist-strap. That’s about how the Neptune Pine feels on the wrist.

The materials it’s made of are of the normal Android mid-range phone variety. Nice plastic, a rubbery finish around the sides, and a 320 x 240 2.4-inch Gorilla Glass touchscreen (with horrific viewing angles). Power and volume buttons are a shinier plastic than the rest of the build, and there is 512MB RAM backed by 16 or 32GB memory. A Snapdragon 400 clocked at 1.2GHz carries you though. 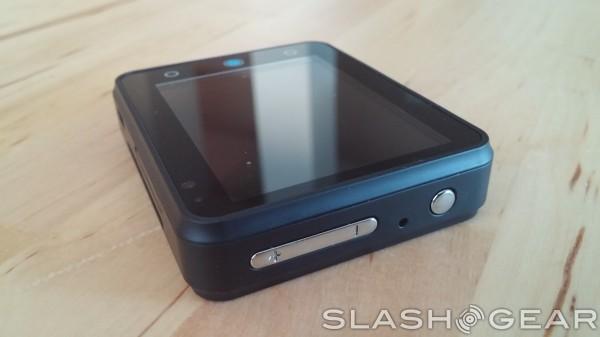 An 810mAh battery powers things along, but keep in mind the bigger screen with this one. You won’t be getting much better battery life than the rest of the smartwatch field, here. A VGA front-facing cam paired with a 5MP rear-facing cam is also on board, but we’ll get to that in a minute.

The wrist-strap is as big as the Pine itself, and just as awkward. You can take the Pine out of the strap, but it’s a kluge. I more than once thought I broke the locking mechanism, as it’s just so tough to maneuver. Big and clumsy, the band is as polarizing as the Pine itself. 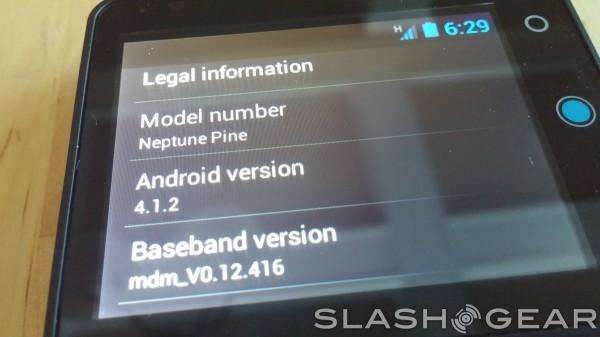 Pine uses Android, but a severely dated version of such (and not Android Wear). Android 4.1 is what is used here, so keep that in mind straight away. Neptune hasn’t done anything to Android, making the smart move to stay stock. Android 4.1 isn’t ancient ( I mean, we’re not using Gingerbread or anything), but feels increasingly dated, especially as Android “L” looms with its fancy material design.

In practice, the watch is as adequate as a mid-range phone. If you’re not expecting much in the way of “wow”, Pine is just fine. The touchscreen is a bit laggy, and sometimes unresponsive to faster touch. Playing the pre-loaded Fruit Ninja, a game that requires quick reflexes, Pine’s screen let me down time and again. 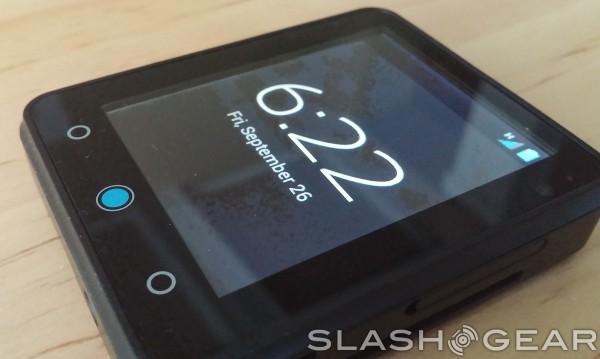 Though the screen is big, typing and such is scaled according to its small profile. You won’t get half a phone’s worth of keyboard — you get half a Pine’s worth. Normally I’d say something like “download Minuum”, but you can’t.

The camera duo are about what you’d get from an entry-level smartphone. A VGA front-facing cam takes the most basic of selfies, but could be useful for a video chat. The 5MP rear shooter is less than impressive, but could be great for a quick video — if you can actually free it from the wrist-strap in time. 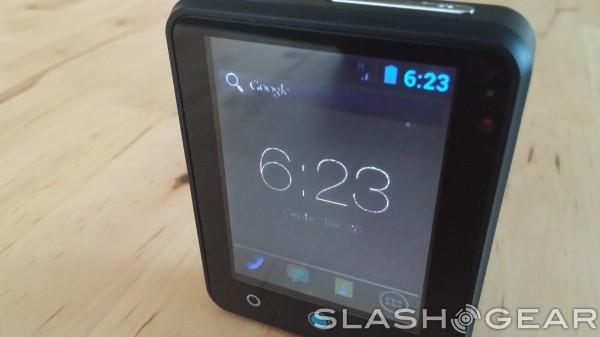 The terrible viewing angles are hard to ignore

The camera shutter is slow (and likely hampered by the touchscreen lag), so you’ll not be able to take any kind of shot with movement. If you needed to snap a pic of a flower or landscape, it would work.

One ace in the hole for Pine is that it connects via cellular radio, which both confuses and delights. On one hand, we’ve made a step toward a smartphone-free existence — something many have been angling toward. Sadly, Pine is either a massive smartwatch or terribly limited (and small) phone, making it a hit-or-miss proposition. 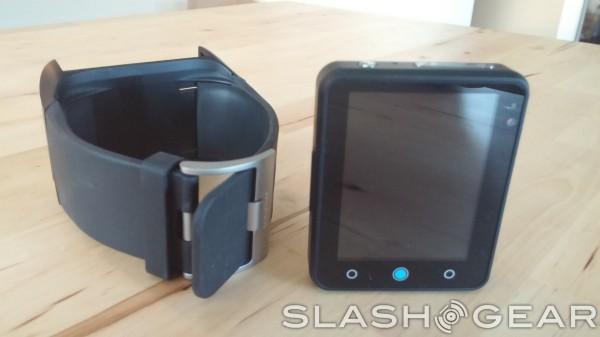 I’m not a small guy, and Pine was too big for me. On the wrist of a smaller human — an average lady, for instance — Pine would be obtuse.

I wore it out a few times while running errands near my home in Portland, Oregon, and was asked the following questions in one form or another, often multiple times:

–Is that a health monitor or something?
–Is that so you can check in anywhere you go (when prompted to clarify, the person admitted they thought I was on some type of house arrest (thug life!))?
–What the hell is that (verbatim, multiple times)?! 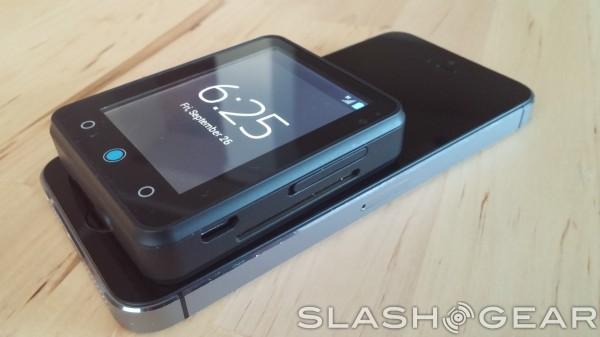 Pine is like nothing you’ve seen before, and is unabashedly experimental. Apps, along with anything else you can use on it, are scaled down for the small screen. That alone makes Pine a problem for someone like me who uses many apps, and relishes the experience.

One several occasions, I found myself in a reviewer’s existential crisis. “What is the Pine?”, I’d wonder. It’s too big to be a watch, and too small to be a phone. It bridges a gap nobody asked it to, and does so rather clumsily. 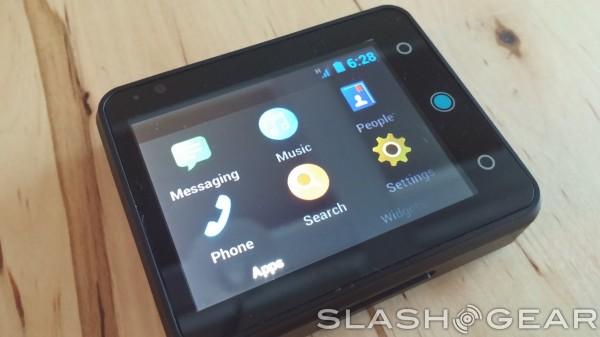 Apps run on the Pine, but are limited in variety. It’s Android, but not officially so — there is no Play Store, here (see? No Minuum!)— so you can’t get anything you want. The apps that do end up running on Pine don’t do so particularly well, either.

You can snap it out of the holster for two-thumbed action, which makes it very phone-like. That holster, though, it sits on your wrist, just like a watch. What is Pine?

For clarity, I turned to the Pine itself. When you power it off, it reminds you what it’s all about. “Your phone will shut down”, it says.

If that “phone” is the Neptune Pine, then I’m okay with that. 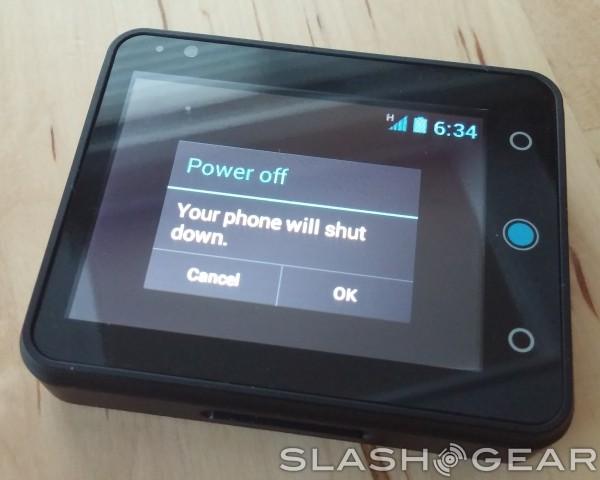