Today we’re taking a look at the Needletail SX, Arkh Flight Systems’ (AFS) new flagship gaming PC. AFS seemed to have one goal when putting together the Needletail SX: make an insanely powerful gaming PC regardless of cost. Indeed, you’re working with a lot of power with the Needletail SX, but money can’t be an issue if you’re looking to buy one, as you’ll be paying a premium price for access to such a rig. It the Needletail SX worth the hefty price tag? Read on to find out.

When you pull the Needletail SX out of the box for the first time, you’re likely to be taken aback by how awesome everything looks. All of your hardware is enclosed in an excellent NZXT Switch 810 full case, which has a window on the right side so you can look inside and view your motherboard. The case itself is sleek, with more than enough room on the inside to add additional hardware should you ever want to. The case also comes equipped with a number of dust filters to make fan maintenance less of a chore. The case is glossy in most places, which means that it will attract fingerprints easily, but a little upkeep is a small price to pay to keep your Switch 810 looking great.

That sexy-looking case is filled with some of the best hardware around. Bringing everything together is an ASUS Rampage IV Extreme motherboard. This particular motherboard features an Intel x79 chipset, and enough PCI express 3.0 slots to support 4-way SLI or Crossfire. Even though the Needletail SX already comes with more than enough graphics power, it’s nice to know that you can continue to upgrade should you need any more power in the future. On the back of the unit, we’ve got 4 USB 3.0 ports, 8 USB 2.0 ports (one of which is reserved for ROG Connect), and two eSATA 3.0 ports. The ASUS Rampage IV Extreme is an excellent motherboard, but then again it would need to be with all of this high-end hardware attached to it. 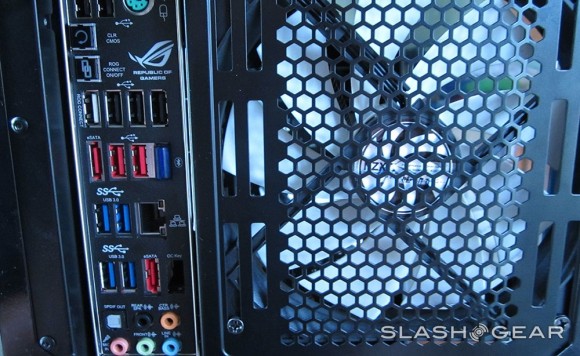 As far as the CPU goes, you’re working with an Intel Core i7-3930k, which has six cores and 12 threads. This CPU normally comes clocked at 3.2Ghz, but AFS takes care of the overclocking for you and bumps that up to 4.4Ghz before sending it off. The model we received uses Intel’s older Sandy Bridge microarchitecture, but it seems that AFS has since updated its models to use Intel Ivy Bridge CPUs. It goes without saying that you’ve got a lot of processing power under the hood, and even that’s something of an understatement. You’ve got an excess of processing power under the hood, as the i7’s six cores can handle whatever you need to do with this computer with plenty left to spare. One only needs to look at the Geekbench and Cinebench scores posted below to see that much is true.

Next up let’s talk about RAM. Surrounding the CPU in a rather nice looking display are 8 G.Skill Ripjaws Z 4GB DD3 cards at 2133 MHz. That means you have a whopping 32GB of RAM at your disposal – likely more than you’ll ever need, but there to ensure that everything runs extremely smooth. Indeed, that RAM helps make this computer incredibly fast, regardless of what you’re doing. You can play a game with all the settings maxed (more on that later) and never have to worry about stuttering, thanks partially to the amount of RAM you’ve got under the hood.

The dual SLI EVGA NVIDIA GTX680 graphics cards help with that too, naturally. With 2GB of video RAM each, this SLI setup can handle anything you can throw at it, as far as gaming goes. The GTX680 is one of NVIDIA’s enthusiast-level cards, meant only for those who take PC gaming incredibly seriously, and this computer uses two of them. Of course, installing two of the best GPUs around makes for a pretty significant price hike, but with these two working together, you won’t have to worry about updating your graphics hardware anytime soon. 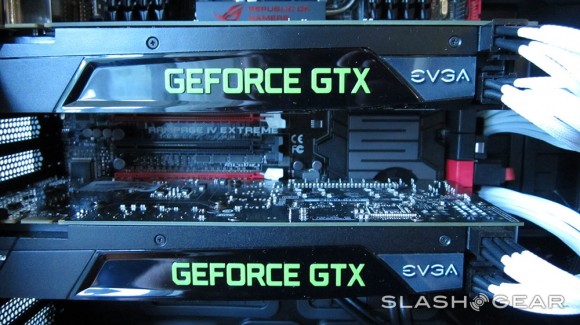 The CPU is cooled by a Corsair Hydro Serious H100 cooler, and what’s interesting about this particular water cooler is that comes with adjustable fan settings. There are three settings in total – low, medium, and high – and the computer comes set to medium out of the box. You’ll be able to use the medium settings for most anything you’ll be doing with the Needletail SX, as it isn’t too loud (though it isn’t exactly silent either), and provides more than enough air to keep the computer cool while playing even the most graphics-intensive game. AFS recommends that you install a CPU thermometer widget to ensure that your CPU never runs above 82 degrees Celsius for too long, but in all of my tests, I never managed to get the CPU to heat up hotter than the mid-50s range. In other words, this cooling system does its job wonderfully, even when you’re intentionally trying to push it to its limits.

With storage, you’ve got a Seagate Barracuda 3TB HDD and a Plextor M3 256GB SSD to take advantage of. Both are connected through SATA 6.0, and the operating system (in this case the Needletail SX is running Windows 7 Ultimate 64-bit) is stored on the SSD. With the 256GB allowed by the SSD, you might want to consider installing some of your most-played games on it, as load times are obviously dramatically shorter when running from the SSD. This HDD/SSD setup, along with the RAM and CPU, makes this beast ridiculously fast, so time spent waiting for something to boot or load is kept to a minimum. 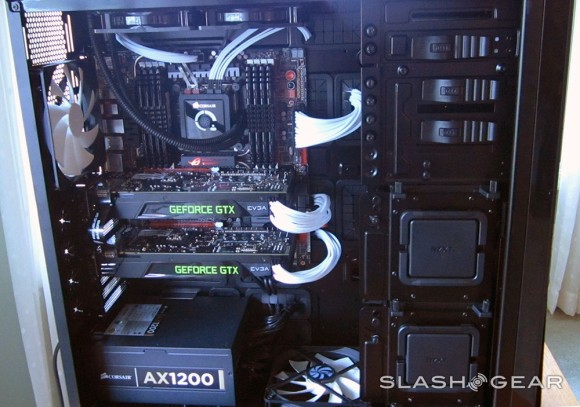 You’ve heard enough about how great the hardware in this PC is, but the benchmarks prove that it isn’t just talk. With Geekbench 2.0, the Needletail SX managed to post a score dangerously close to 25,000. The processor was the star of the test, pulling in ridiculously high numbers, especially with the processor floating point test. Running Cinebench 11.5, we get impressive results once again. Cinebench is a benchmark tool that tests both the CPU and the graphics power, and both came back with excellent scores. The CPU test showed a score of 12.71, while the OpenGL test ran at a smooth 60.34 fps. It isn’t that often you get a computer that can put out scores like that – be it in Cinebench or Geekbench – which just goes to show that AFS was serious about building an enthusiast-level gaming PC when they put the Needletail SX together.

I’ve already mentioned gaming a couple of times in this review, but now it’s time to get down to the nitty-gritty. After reading through the hardware section, it should go without saying that gaming is wonderful on this machine, but just for the purpose of reiteration, I’ll say it anyway: gaming is wonderful on this machine. I tested Battlefield 3, Skyrim, and Batman: Arkham City (all at 1920×1080 resolution) on this rig, and it was able to play all of them as if it was nothing.

With Batman: Arkham City, I used extreme detail settings, NVIDIA 32x CSAA, high DirectX 11 Tessellation, and turned NVSS and HBAO on. The result was a game that ran consistently between 50 and 60 fps, with an upper limit of around 70 to 75. Changing the settings to 8x MSAA and keeping everything else the same, we get about the same results: 50-60 fps consistently with a max that sits right around 70. On 8x MSAA, I enjoyed 60 fps on a more consistent basis, but when you’ve got a frame rate that averages around 55 fps, the difference is hardly noticeable. Overall, the graphics were incredibly smooth and there was very little stuttering; normally, the game stuttered briefly when it was loading a new area, but that was it. Not too bad for a PC port that many people have issues with. 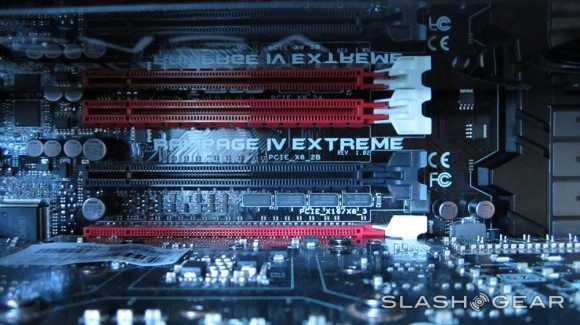 Moving right along to Battlefield 3, turning up the settings as high as they can go – that includes 4x MSAA and 16x Anisotropic filtering – I managed a frame rate that ranged between 70 and 90 fps. That’s when you’re in outdoor environments with a ton of action surrounding you. With indoor environments, the frame rate can jump as high as 120 fps. Like Batman: Arkham City, Battlefield 3 looked amazing on the Needletail SX, with almost no stuttering whatsoever.

Finally, we come to Skyrim, which is unfortunately locked at 60 fps. There are ways to change this, but using ultra settings, 8x Anti-Aliasing, and 16x Anisotropic filtering, the game ran at a solid 60 fps all the time. That’s with Bethesda’s HD DLC and Laast’s Pure Waters mod (along with a few weapons and armor mods) installed. With Skyrim on the Needletail SX, you get nothing but silky smooth visuals, and trust me when I say that this is the way Skyrim was meant to be played.

Again, the Needletail SX is an excellent gaming rig, and it’s sure to handle whatever kind of gaming challenge you give it. You’re working with a lot of power under the hood, and the good thing is that this hardware isn’t going to become obsolete anytime soon. If you want to game with the visuals maxed while still enjoying an excellent frame rate, you need look no further than the Needletail SX.

So I’ve been singing the praises of the Needletail SX for quite a few paragraphs now. If you couldn’t tell by now, I’m in love with almost everything about this PC. The word “almost” is key there, because there is one significant downside to the Needletail SX: its price. With all of that hardware you’ve got installed, this PC does not come cheap. It comes in at $4,499, and that doesn’t include the operating system. You’ll have to buy the operating system separately (AFS offers the many versions of Windows 7 as “additional options”), so if you want the exact build I was working with here, you’re going to have to shell out $4,698. 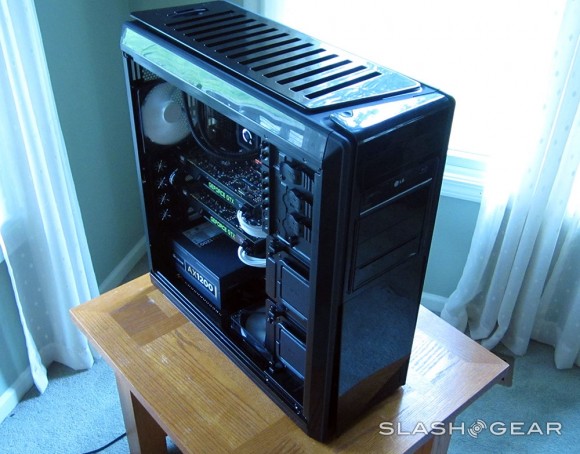 That is going to hold a lot of people back, but it’s clear that AFS didn’t want to make a budget PC with this one. The old adage “you get what you pay for” applies here, and that high price tag means that you’re getting one of the best (if not the best) pre-built gaming PCs around. The Needletail SX is Arkh Flight Systems’ flagship model, and the company has packed this thing with some of the best hardware currently available. The steep price tag means that only the most serious of gamers need apply, but if you’ve got the cash and you don’t want to build a PC yourself, then you should be very happy with the Needletail SX.