The sales message is clear: buy NEC’s new Valuestar N VN790/BS 3D all-in-one, freshly launched in Japan, and get a gobful of whale.  Initially promised last month – though a little earlier than expected – the 20-inch desktop has a 1,600 x 900 2D/3D capable display, Blu-ray drive and a CPU from Intel’s mobile line-up.

As for the 3D effects, you’ll need a special pair of glasses (one set is included; others are $67 a pop) and the new Valuestar supports Blu-ray 3D content as well as other sources.  Technical specs include 4GB of RAM (8GB max), 1TB of HDD space and a pair of 3W speakers; there’s also an integrated TV tuner and remote control.

NEC expect the Valuestar N VN790/BS 3D all-in-one to begin shipping in Japan in June 2010, where it will cost around $2,450.  No word on an international release, but we would be surprised if it wasn’t timetabled.

Meanwhile, not to be left out, ASUS are apparently planning a 3D all-in-one of their own, using NVIDIA’s 3D Vision technology and a 24-inch display.  The so-far unnamed desktop will use an optical touchscreen and is expected to arrive in August 2010, priced at around $2,100. 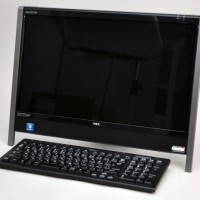