Lay down your Dyson, unplug your Hoover and send Henry to the knackers’ yard. Fresh from showing how much it sucks in the US, Neato‘s XV-15 robotic vacuum cleaner is on its way to Europe to assassinate dust bunnies there, too. Meaner looking than a Roomba, according to Neato the XV-15 is cleverer than its rivals too, fighting dirt not only with suction but with lasers. Check out the full SlashGear review after the cut.

Most domestic robot vacuums – such as from iRobot, Samsung and LG – have opted for a discrete, almost delicate design; something that won’t upset the children when it trundles into their rooms and nudges through their toys. Neato, though, have gone an entirely different direction. The XV-15 (like its XV-11 US cousin) is battleship grey and resolutely masculine, while its squared-off front bumper is broad and blunt-nosed.

What makes the XV-15 special, Neato claims, is its intelligent room mapping. Whereas the Roomba basically operates on a bump-and-rotate system, relying on repetition to cover the room, the XV-15’s conning tower houses a laser array which is used to map out what’s around it, and then continuously update that map as objects move or people walk past. The chunky bumper is an impact sensor, but the XV-15 aims to spot obstacles before it hits them. 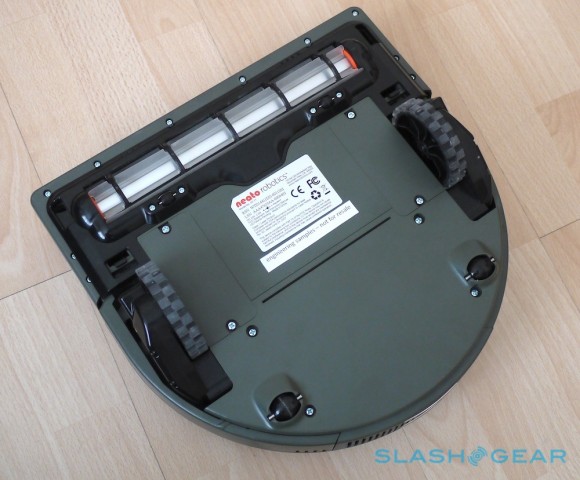 In the box is the vacuum itself, a docking station for recharging and a reel of magnetic tape, the latter used to mark off areas where you don’t want the XV-15 to go. Usually with a robo-vac that would include the top of staircases, though Neato has given its model enough smarts to avoid tumbling down several flights. The docking station is basically a couple of metal strips – against which contacts on the rounded edge of the vacuum butt up – and a laptop-style AC adapter inside.

Unfortunately the mains cable on our review unit was unplugged and, with no reference to what’s inside the dock in the Getting Started guide, it was trial & error to figure out why the XV-15 wouldn’t charge. Still, the design does at least mean you can unwrap more cable and move the dock further away from the mains socket, or indeed unplug the AC adapter altogether and plug it directly into the DC input on the vacuum.

Dust is collected in a plastic box set into the top of the XV-15, easily tugged out and, aside from the grey upper panel, transparent so you can see whether it needs to be emptied. A paper filter is held in place by the easily-removed door. Rather than simply using sweeping brushes, Neato has installed a proper vacuum system that, the company proudly claims, is based on jet-engine technology. 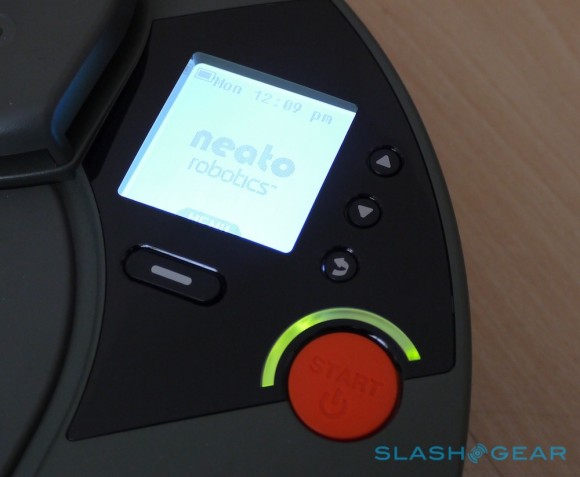 Controls consist of a small monochrome backlit display, scroll buttons, a back button, select key and large orange power/start button. Usage can be as straightforward as hitting the orange button twice and letting the XV-15 do its thing, or you can set up cleaning schedules. You can have the robo-vac run daily, every other day or three days a week.

If Neato hadn’t made the jet-engine reference, we would’ve. The XV-15 is plain loud in comparison to robo-vac rivals, the first few seconds of powering on filled by the increasing whine of the “centrifugal compression-impeller” as it gets up to speed. It’s quieter than a manual cleaner – and of course you can leave the room that the robot one is working in – but it’s definitely noticeable. You probably wouldn’t want to schedule an overnight clean, for instance.

As soon as you hit the start button, the XV-15 moves a pace forward and slowly turns around, playing its (invisible) laser around the room to map it out. Then it gets going, initially running around the edges of the room before criss-crossing the middle, all the time maintaining an evolving map of the surrounding area. That map doesn’t require line-of-sight to the charging station, either; once it’s done one room, the robo-vac can trundle through any doors it has spotted and carry on its hard work in any further rooms.

Object avoidance uses a mixture of old-fashioned bump sensors and new-fangled lasers, and often depends on whereabouts obstacles are. A low sofa confused the XV-15, its lasers seemingly low enough to tell it there was space underneath, but the body of the cleaner not small enough to fit. Instead, it made its way along the edge, bumping and turning, bumping and turning. The bump sensors themselves are reasonably sensitive, though the XV-15 would push laptop power supplies across the floor until their wires stopped them. It’s a brave little cleaner, too: it will try to scoot its way under chairs and around blockages we assumed it would merely bypass.

If the battery runs low mid-clean – not something we experienced in our “compact” London apartment, but something those who don’t live in shoeboxes might encounter – then the XV-15 can track straight back to the charging dock, rejuice and then retrace its steps to continue cleaning where it left off. Similarly, when it reckons all the rooms are done, it will go back to the dock and fall asleep again. Unfortunately, if you manually cancel the cleaning routine, there’s no “return to base” option: you have to carry it back instead. 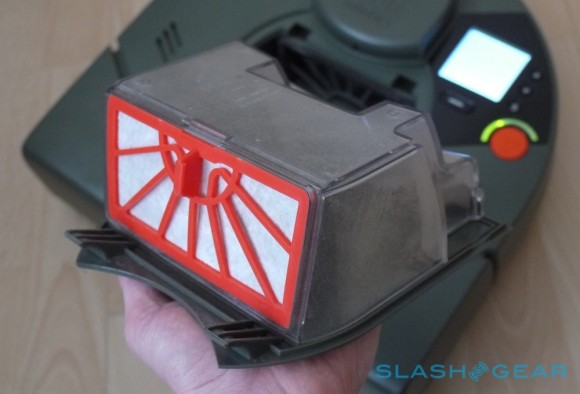 Cleaning performance is surprisingly good. We were suitably disgusted by the hair and dust the XV-15 picked up, though performance was better on hard floors like wood or tile than carpets. Despite Neato’s claims about the square prow being good for getting into corners, however, we found there was a narrow strip around the edge of the room which still inevitably needed some manual attention. Still, that’s the sort of thing you could do with a compact, handheld vacuum, rather than dragging out your full cleaner.

That’s not the only annoyance. Although “set and forget” is the promise, there’s a little homework to be done if you want the robo-vac experience to go smoothly. Despite the object avoidance systems, we did find situations where the XV-15 would get stuck. Shoelaces are a particular hazard, getting caught up inside and eventually prompting the robot to shut down, and trailing cables, papers or envelopes, socks and other small detritus can prove similarly perilous.

On a couple of occasions, even though we’d done a sweep – pardon the pun – of the rooms to tuck away anything we thought might trip the XV-15 up, we still returned home a few hours later to find the robo-vac had got stuck and gone to sleep in protest. Unfortunately, there’s no way of telling exactly how far through its cleaning routine this occurred, unless you go round on your hands & knees examining the state of dust on the floor. 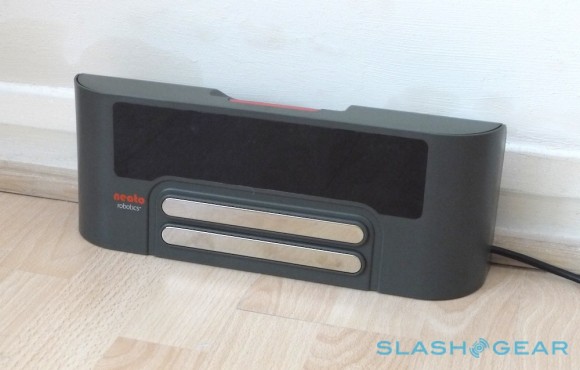 In a world where bathroom scales can talk to your iPhone via WiFi, is it too much to ask that your vacuum cleaner does the same? Perhaps it is, but we wish there was some sort of alert/update system that could take the mystery out of the whole process.

At $399 in the US (for the functionally-identical XV-11) or £379.99 in the UK (when it goes on sale in late July), the Neato XV-15 is around the same as a mid-range Dyson. That’s expensive for a vacuum cleaner, especially since you’ll also need some sort of manual option to tidy up around the edges, too. Performance is also a little less thorough than a Dyson can manage, but a daily tidy-up is less of a chore with the XV-15 thanks to its automation.

A robot vacuum cleaner is obviously a luxury item, but if you’re going to treat yourself then you may as well get a reasonably intelligent one. Neato’s object-avoidance systems aren’t foolproof but they’re a lot better than other, cheaper robo-vacs, and the dirt-grabbing performance is solid too. The industrial looks may put off some, but the XV-15 is a robot pet we’d like to keep around.