NASA has announced that as part of its final assembly of the Perseverance rover, its team has installed the parachute, off-road wheels, and air brakes. The wheels are machined from flight-grade aluminum, according to NASA, which used titanium for the spokes. The parachute, meanwhile, will be used to slow down the rover on its descent to the Red Planet’s surface when it arrives early next year.

Perseverance is NASA’s most recent Mars rover, one that will launch later this year and land on the Red Planet in early 2021. The space agency has been conducting the final assembly and testing of this rover at its Kennedy Space Center ahead of the planned launch, according to NASA, which explains that the previous Perseverance test drive involved flight spare wheels, which won’t be launched with the spacecraft. 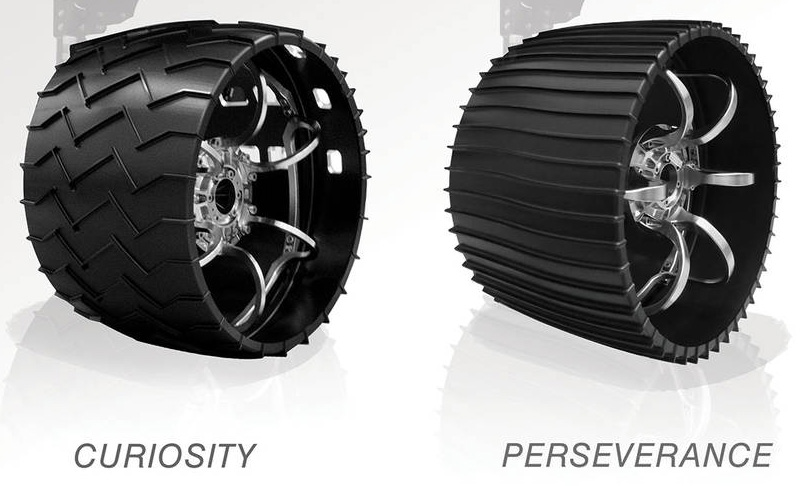 The aluminum and titanium wheels used on Perseverance are based on the version used for the existing Curiosity rover currently operating on Mars. NASA updated the tread design, replacing Curiosity’s chevron treads with ones that are ‘gently curved’ to better handle sharp rocks without compromising performance on sandy surfaces.

The six wheels were installed on March 30 only a few days after the Perseverance team installed the rover’s massive parachute. According to NASA, the parachute is made from Kevlar, nylon, and Technora, which will need to hold up well enough to slow the massive rover from March 1.7 down to a mere 200MPH as it descends through the Martian atmosphere.

The parachute weighs 194lbs and is densely packed into a 20-inch cylinder on the rover’s backshell. In the span of only half a second, the parachute will deploy 7 miles above the Martian surface to its full 70.5ft-wide canopy, slowing down the 2,260lbs rover. Once on Mars in mid-February 2021, NASA will start its search for life on the Red Planet. That timeline assumes NASA is able to successfully launch the rover by August 5, 2020.