NASA’s Opportunity rover may not have to worry about running into traffic congestion on Mars, but vast dust storms are definitely an occupational hazard. The science robot has been forced to go into emergency lock-down, after a storm larger than all of North America whipped itself into a frenzy on the red planet.

The storm was first spotted forming more than a week ago, on Friday, June 1. The Mars Reconnaissance Orbiter caught sight of the developing bad weather, and the orbiter team passed on a warning to the Opportunity team at NASA’s Jet Propulsion Laboratory at the California Institute of Technology. Although dust storms aren’t uncommon on Mars, they can be deadly to the rovers.

That’s because Opportunity – like NASA’s other Martian robots – relies on sunlight for power. Solar panels mounted on the upper body of the rover collect energy that’s used for propulsion, scientific experiments, and beaming back data to Earth. With dust clouds obscuring the sky, by Wednesday, June 6, Opportunity’s battery levels had already “dropped significantly” NASA says. 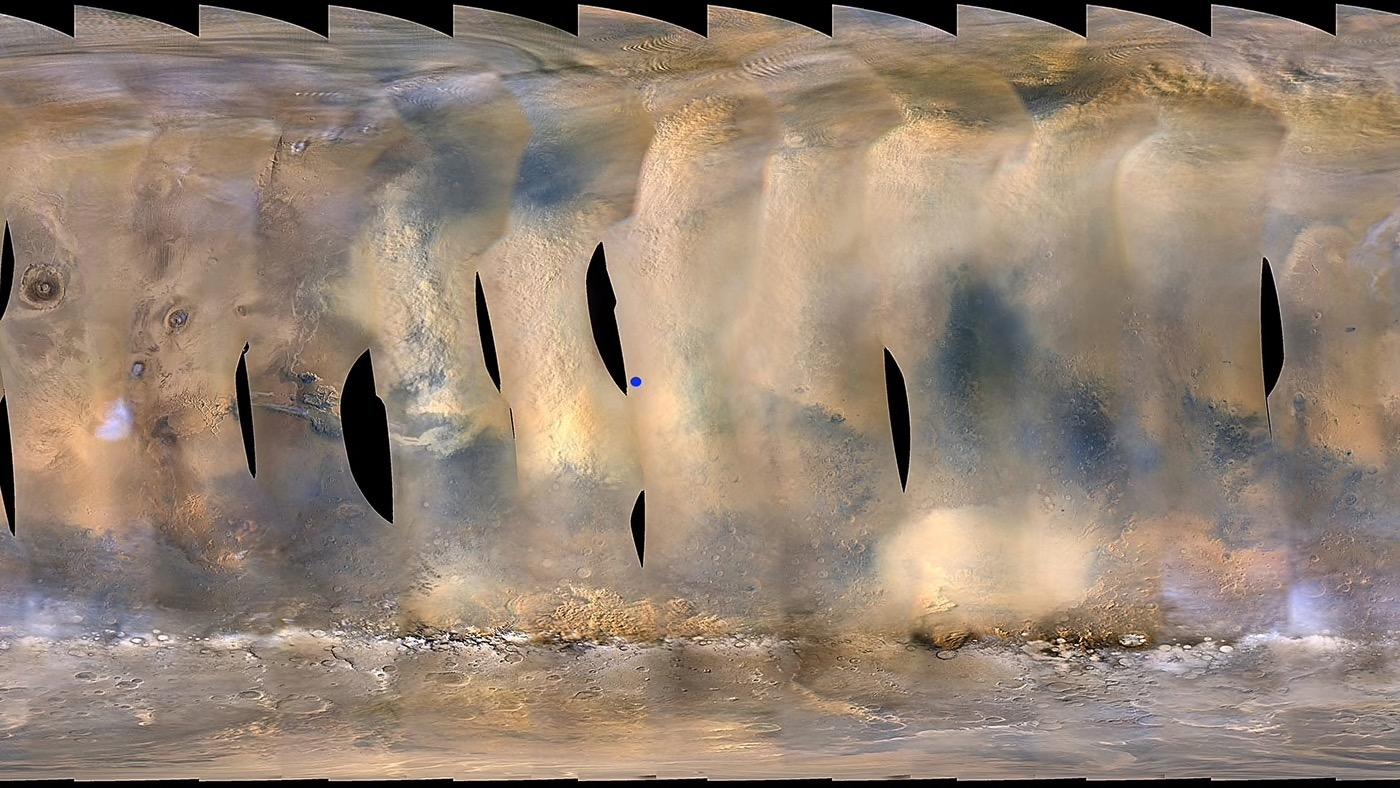 Indeed, as of June 8, the storm had swollen to more than 7 million square miles, enveloping Opportunity in the process: the rover’s location is marked with a blue dot in the center of the image above. Air conditions are similar to “an extremely smoggy day,” as a result, NASA says. Faced with dwindling power reserves and no recharge in sight, the JPL team running the rover opted to put it into minimal operations mode.

Opportunity was designed with weathering huge storms in mind. Back in 2007, in fact, an even larger storm than the one this week covered a huge portion of Mars, with the rover going into low-power mode for two weeks. Indeed, for several days it lost contact with NASA completely.

All the same, there are perils involved: the rover can’t stay powered-down forever. Part of the equipment onboard is a survival heater system, which kick in to keep the batteries at a certain temperature rather than allowing them to get unduly cold. If the storm persists – and NASA says that Martian dust storms have been known to last for months at a time – then the survival heaters can end up chewing through what battery power is left, leaving the rover unable to power back up by the time the dust clears.

The hope is that that won’t be the case this time around, but storms are believed to have claimed Opportunity’s twin rover, Spirit. It ceased contact with Earth back in 2010.