NASA‘s Cassini spacecraft, launched in 1997, is on a mission to study Saturn and its mesmerizing rings and moons. Saturn has nine named moons and a total of fifty-three natural satellites in its orbit. As the multiple moons wax and wane in light, they create an image that looks like it belongs in a science fiction movie instead of our own solar system. This triple crescent moon sighting was captured by Cassini in March, but has just now been released by NASA.

Titan, the largest (center) moon pictured appears a bit fuzzy due to the cloud layers. Despite their blurring effect, the cloud layers’ light refraction creates a much deeper crescent that wraps almost two-thirds of the way around the moon’s silhouette.

The moon in the upper left-hand side is Rhea, which has a diameter about one-third the size of Titan. Rhea appears a bit bumpy, on film, due to its ice-covered craters. The smallest crescent moon pictured is the minute Mimas, which is about thirteen times smaller than Titan. 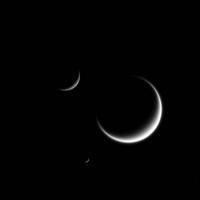 This photograph actually captures what we could see with our own eyes, given the chance. It was taken using only visible light and a narrow-angle lens from the Cassini spacecraft. Incredibly, Cassini didn’t have to be up close and personal with the moons to capture the image. The photograph was taken from over 1.2 million miles away. Cassini is still on its mission, and we can expect more detailed images to uncover the secrets of Saturn in the future.