DARPA has been hosting a Robotics Challenge since last year that challenged some participants to create robots that can be used in the real world. The official name for the Valkyrie robot given to it by NASA is R5. The bot stands 1.9 meters tall and weighs in at 125 kilograms. The robot has 44 degrees of freedom and is powered by batteries.

The robot was created in cooperation with the NASA Johnson Space Center in Houston, the University of Texas, and Texas A&M universities. Funding for the robot was granted by the State of Texas. The first competition for the DARPA robotics contest will happen later this month. 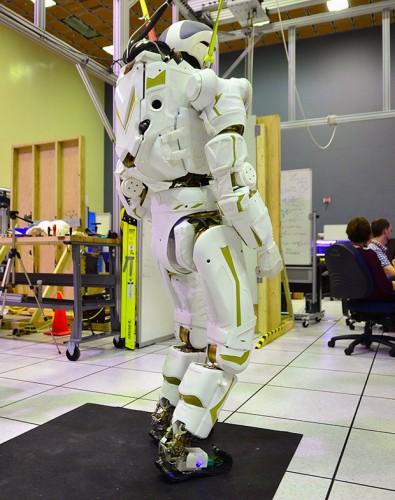 The Valkyrie robot will be competing against five other Track A teams that have developed their own robots. The DARPA contest requires the robots to walk over uneven terrain, climb a ladder, use tools, and drive a vehicle. One of the goals of the DARPA contest is to create robots that can take over from humans in certain situations without needing any special accommodations, which is why the robot is humanoid.

The arms of the robot have seven degrees of freedom with actuated wrists and hands. Each hand has three fingers and a thumb. The head can tilt and swivel around while the waist is able to rotate. The legs themselves offer the robot six degrees of freedom and end with feet that have six-axis force-torque sensors. The robot has a battery in its backpack good for an hour of use per charge. The designers of Valkyrie said that they leveraged some of the tech and knowledge gained in developing Robonaut over the years. Valkyrie even has a glowing circle in its chest that looks like Iron Man’s Arc reactor.