Florida’s having serious issues with algae blooms this year, and NASA has managed to take a stunning photo of the problem from space. In recent days, NASA released a high-resolution photo of Florida’s Lake Okeechobee and the algae bloom that covers more than 30 square miles of it. The photo was taken on July 2 by the Landsat 8 satellite, the same satellite responsible for much of the satellite imagery found in Google’s latest Maps refresh.

The algae bloom has been present since early May, and has caused growing issues for the state. Water quality is being affected downstream, with reports saying that issue persists all the way to the Atlantic Ocean. Pictures of the nasty green water dot the Internet, but none are as complete and massive as NASA’s new photograph. The photo below was taken by Landsat 8’s Operational Land Imager. 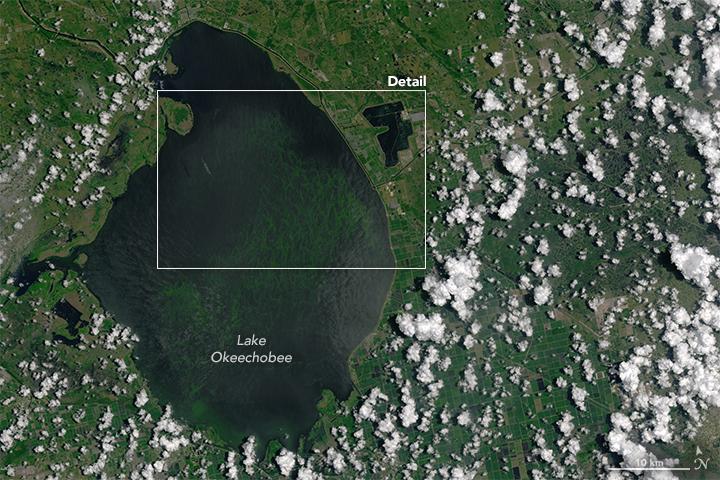 You can check out a high-resolution (11MB) version of the image here.

Because water was discharged from the lake earlier this year, water bodies downstream are seeing algae growth that otherwise wouldn’t have the phosphorous and nitrogen necessary to sustain it. For this reason, as well as the excessive growth in Okeechobee and trouble combating the bloom, Florida has declared a state of emergency. It isn’t clear why, exactly, the algae bloom started so early and has grown so massively.

As far as the photo itself goes, NASA says the Operational Land Imager captured the image with light bands 4, 3, and 1, which is red light, green light, and coastal aerosol blue. It isn’t clear the exact composition of the algae bloom, but NASA says the lake make contain blue-green algae. Based on other pictures from the region, the bright green color looks pretty true-to-life.