NASA is showing off a slew of new photographs taken on the surface of Mars by the Opportunity rover. Of all the images, the one you see below is most interesting to me showing Opportunity taking the photograph and catching its own shadow in the pic with a giant Martian mountain in the distance. The photo looks like there should be an ocean between the rover and the distant peaks. This particular photo was taken using the panoramic camera looking eastward across Endeavor Crater on March 9, 2012.

The photograph is a result of multiple images taken through different filters and combined into a single mosaic view. It never ceases to amaze me that the Opportunity rover has been on the surface of Mars for eight years now and has continued to be operational well beyond what NASA expected. The second photo you see below is a color view from Opportunity showing the West rim of Endeavour crater. 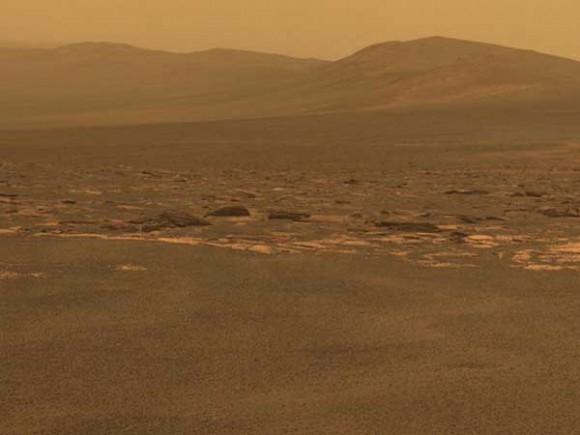 The crater has a diameter of about 14 miles and is more than 25 times wider than any crater opportunity has approached before. NASA has 43 images with some released only this week that are all available on Space.com. If you’re a fan of space exploration, you’ll definitely want to check them out.