NASA has been exploring the surface of Mars for many years using rovers that roll over the surface and satellites that orbit in space. The catch is that the satellites can’t get the same level of detail you get from inside the planet’s atmosphere, and rovers are very slow. To make for faster exploration of the Red Planet from within its thin atmosphere, NASA is testing a fancy helicopter.

The helicopter is very lightweight tipping the scales at four pounds, and the technology demonstrator model has passed flight tests. Flight tests for the first assembled helicopter were completed in late January 2019, and the entire vehicle is in the process of being certified for use on Mars.

The testing is to certify the helicopter ahead of February 2021, when the copter will reach Mars tucked under the belly of the Mars 2020 rover. After a few months on the planet, the helicopter will be deployed. NASA scientists say they have logged over 75 minutes of flying time so far with the engineering model. 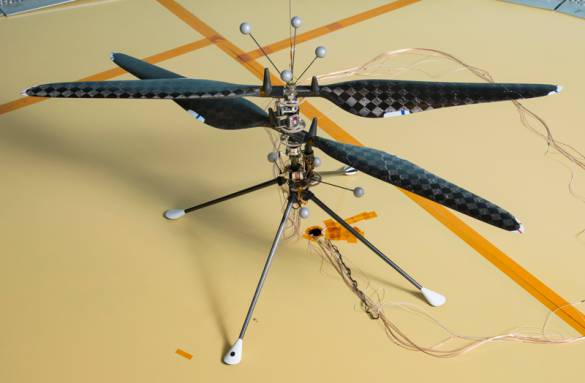 The engineering model is a “close approximation” of the Mars helicopter. However, the recent flight tests were performed with the actual helicopter bound for Mars. To create the right environment for testing, the team flew the Mars helicopter in the JPL space simulator, which is a 25-foot wide vacuum chamber. The team connected a motorized lanyard to the top of the copter to reduce the gravity to what the helicopter would see on Mars; the tests went off without a hitch.