NASA’s Juno mission has sent back its first two close-up images of Jupiter’s giant moon Ganymede, giving the public their first look at the moon’s surface in two decades. Juno made its flyby of Jupiter’s moon yesterday, June 7, marking the first time a spacecraft has gotten this close to Ganymede in more than 20 years, according to the space agency.

Ganymede is the largest moon in the solar system and the only one of its kind known to possess a magnetic field. Scientists know many things about the moon, including that it has a metallic core, it is largely composed of water and silicate rock, and that its surface is covered with two different terrain types, one full of impact craters and the other covered with long grooves and ridges. 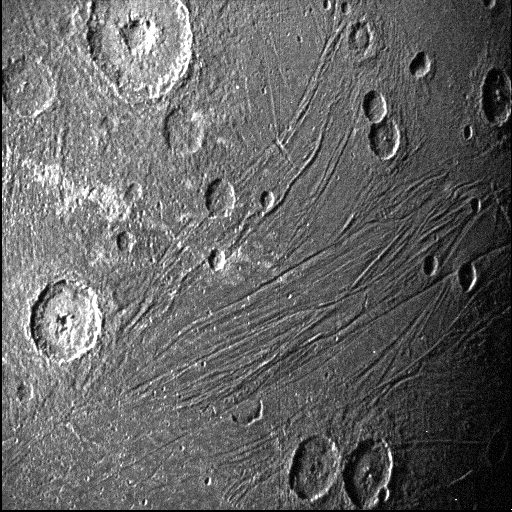 These terrain features are prominent in Juno’s first two close-up images of Ganymede, which NASA published a day after the flyby. One of the images was captured using the JunoCam, while the other comes from the Stellar Reference Unit camera.

Both the light and dark terrains of this massive moon are visible in the images, as are the crater features common on one terrain and the grooves on the other. The image is greyscaled at this time as the spacecraft used its green filter to capture the initial image.

NASA says that Juno will later use its blue and red filters to capture additional images, enabling the space agency to eventually release a color image of the moon. The resolution of this image is approximately 0.6 miles for every pixel, putting its massive size into scale. The image above has a slightly smaller resolution and features the moon’s dark side, which faces away from the Sun.