NASA is preparing to study a mesmerizing “jellyfish” galaxy in unprecedented detail, with the James Webb Space Telescope aiming to unlock the secrets of how – and why – it formed. ESO 137-001 doesn’t have the most memorable name, but the distant galaxy has been the subject of longstanding investigation as astronomers explore the origins of stars.

Look at it with the naked eye, were you close enough to perceive it, though, and ESO 137-001 might not prove immediately attention-grabbing. It’s only when you add in X-ray imaging to the visible light that the true impressiveness of the galaxy is clear. That, and why it earned its nickname as the “jellyfish” galaxy. 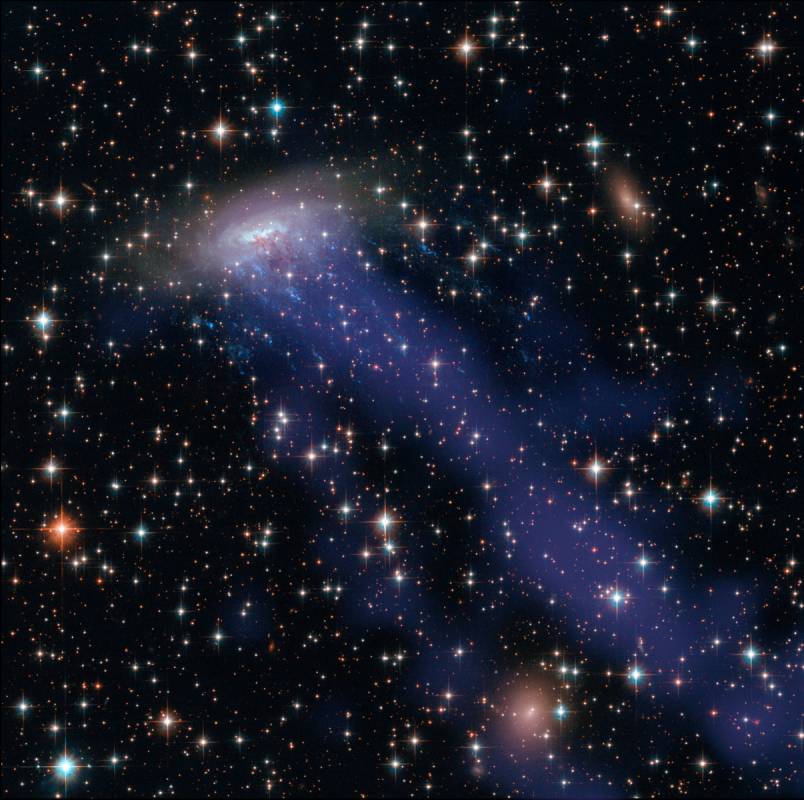 NASA combined visible light imagery from the Hubble Space Telescope, and X-ray light from the Chandra X-ray Observatory. That shows the tail of hot gas that follows the galaxy, as it races at over 4 million miles per hour toward the center of the Abell 3627 cluster. That tail is believed to be around 260,000 light years in length.

That process in itself isn’t unusual. Scientists know it as “ram pressure stripping,” where the hot gases between galaxy clusters drag at the gases and dust in the galaxy itself as it passes. Since stars require gas to form, if too much is removed then the life of the galaxy can be shortened.

At least, that’s the theory. What helps make ESO 137-001 so fascinating is that, despite its elongated tail of stolen gases, stars are still forming. The stripping process, NASA points out, should have heated the gas and thus prevented it from creating stars, but that’s not proved to be the case.

“We think it’s hard to strip off a molecular cloud that’s already forming stars because it should be tightly bound to the galaxy by gravity,” Stacey Alberts, a co-investigator at the University of Arizona who will be using Webb data to further examine the spiral galaxy. “Which means either we’re wrong, or this gas got stripped off and heated up, but then had to cool again so that it could condense and form stars.”

The Webb telescope will focus on different points of the tail, spanning the length from its point closest to the galaxy itself, to its end. In the process, Alberts and the team hope to track how materials being stripped have changed conditions over time. Specifically, it’ll be the Mid-Infrared Instrument, or MIRI, that’s tasked with the project.

That looks at mid-infrared light, and is particularly sensitive to the emissions from molecules of hydrogen, sulfur, and oxygen. At the same time, it will detect “more complex, sooty molecules,” NASA says, known as polycyclic aromatic hydrocarbons or PAHs. They’re typically found at points of star formation. Altogether, the expectation is that Webb’s MIRI will deliver 50x more spatial detail and 20x more spectral detail than previous infrared observations.

Combined with existing measurements, the hope is that the new data helps unlock better understanding of star formation in ESO 137-001’s tail. It should also help figure out just what may eventually happen to the fast-moving galaxy, such as how rapidly ram pressure stripping will take its toll.

Of course, for that to happen, the James Webb Space Telescope actually has to launch. That’s not expected to take place until 2021, with the project a combined effort between NASA, the European Space Agency (ESA), and the Canadian Space Agency. The telescope will be launched as a folded bundle, roughly 16 feet wide. When it reaches space, however, it will unfurl as it makes its way to its final orbit, roughly a million miles from Earth. Eventually, it will have a primary mirror more than 21 feet across.