NASA‘s latest Landsat satellite launch has been given the green light to fly today, with the new Earth-monitoring orbiter expected to blast off just after 10am PST on Monday. The Landsat Data Continuity Mission (LDCM) has been running for more than forty years, adding to scientist’s long-term understanding of the changes in our local environment; Landsat 8 will launch atop an Atlas V rocket from Vandenberg Air Force Base in California.

The Landsat satellite operations began in 1972, though the eighth-gen model is considerably upgraded from its predecessors. Sensors include the Operational Land Imager (OLI) and the Thermal Infrared Sensor (TIRS) which independently gather data on land, oceans, areas of ice buildup, and more, with greater accuracy over previous iterations. 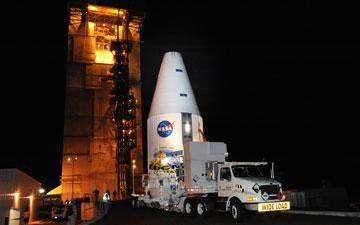 For instance, the OLI uses a fixed long detector array that can monitor the width of the entire “strip” the Landsat is currently following, rather than the sweeping sensor that used mirrors to track side to side in the old system. That’s expected to be more accurate, have less chance of breaking down thanks to a reduction in moving parts, and increase the vital signal-to-noise ratio.

In fact, the satellite will take sixteen days to map the entire surface of the Earth, moving north to south in its orbits, and building up a full picture in narrow bands. Altogether, it weighs around 6,000 pounds, and is around the size of an SUV.

NASA and the satellite’s manufacturers, Orbital Sciences Corporation, have equipped Landsat 8 with sufficient fuel for ten years of constant operations, though its design life is just half that. Long-running monitoring from the program isn’t new, however; Landsat 5 was tagged for shutdown in December 2012, around a quarter of a century later than its program intended.