To better understand the auroras of the Northern Lights above Norway, NASA fired a pair of Black Brant XI filled with colorful dust. They were fired from Andøya Space Center, Norway, and were part of the mission called AZURE (Auroral Zone Upwelling Rocket Experiment). The rockets exploded into a collection of clouds of colorful dust that allowed for extremely observable effects from the ground below.

Two Black Brant XI sounding rockets were used to fire glowing tracer clouds (colorful dust) into the upper atmosphere from between 100km to up to 250km altitude. Once the dust was released, NASA was able to track the trajectory, speed, and general movement of the dust. This was done with a variety of instruments – most of which were DSLR cameras recording the event in real time.

Above you’ll see a very short video captured by Jason A. He was at Alomar Observatory, recording with a DSLR camera set to record for between 30 minutes and an hour. The observatory from whens this recording was made is approximately 10 minutes drive from Andøya Space Center, where the rockets were launched. 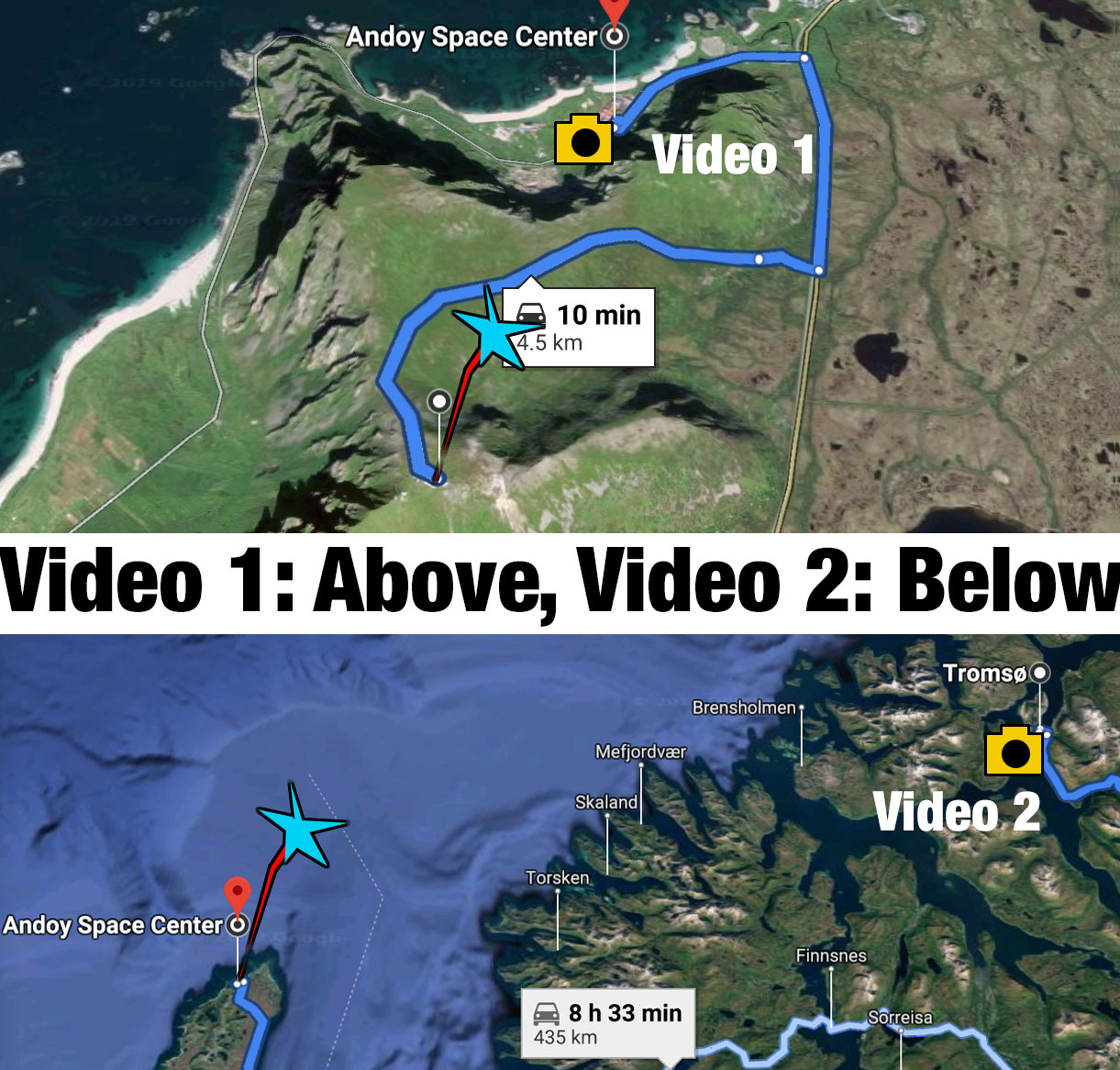 Below you’ll see an awesome happenstance. A fellow by the name of Ole C Salomonsen happened to be recording with his camera during the rocket launch, unaware that any launch was scheduled. “On April 5th I was out filming the aurora borealis while this happened. I did not know NASA/ASC was gonna launch rocket into the atmosphere/auroras. A surprise rocket launch! What a sight!”

The second video (above) was captured in Tromsø, Norway. That’s just a LITTLE further away from the launch site than the place where Jason was situated. To learn more, see NASA’s extended write-up.

BUT isn’t that pollution?

In the clouds launched from the rocket were trimethyl aluminum (TMA) and a barium/strontium mixture – each of which immediately react with the atmosphere, making them absolutely harmless to living creatures – like humans. The products of the reaction caused by a mix of TMA and the atmosphere are aluminum oxide, carbon dioxide, and water vapor, all of which occur in our atmosphere naturally – it’s like dumping water into a cup of water.

Trace amounts of both strontium and barium can be found in every single human being on this planet. The one case of strontium being found dangerous to humans in large amounts is when the element is made radioactive. In that particular case it was found that the negative effects weren’t caused by the strontium itself, but by the radioactivity (not relegated to this one element). Strontium is found “nearly everywhere in small amounts” including “rocks, soil, dust, coal, oil, surface and underground water, air, plants, and animals” according to the CDC.

Barium can be found in nature in underground ore deposits, in our drinking water, in the ocean, in our soil, in foods, and is basically inescapable here on Earth. Just like strontium, the amount released into the air by NASA is so extremely small that you’d inhale more by filling up your car with gasoline. Barium is used as an additive for oils and fuels.