NASA finds glass on Mars, could hold signs of life

Every mark on a planet’s surface details its history. Mars is long suspected of being home to signs of life, so its history is of particular interest to researchers. NASA’s Mars Reconnaissance Orbiter (MRO) has found glass deposits sitting at the nadir of some impact craters on Mars. Previous scientific inquiries into impact glass on earth have been led by Peter Schultz from Brown University. While working on an expedition in Argentina he discovered ancient plant matter and organic material embedded in glass that was formed by an impact from millions of years ago. He proposed that the similar impacts could preserve signs of life on other planets. If they could isolate glass deposits on Mars, there is a chance they could detect and analyze the biosignatures.

Searching for glass deposits on Mars was no easy task. Scientists remotely measure light spectra from the planet’s surface; except, glass doesn’t emit a strong spectral expression. The scientists were practically searching blindly.

To hone in of the proper spectral signal, researchers created artificial Martian glass from similar materials and measured its spectra. Then, they created an algorithm for the MRO to specifically that signal. 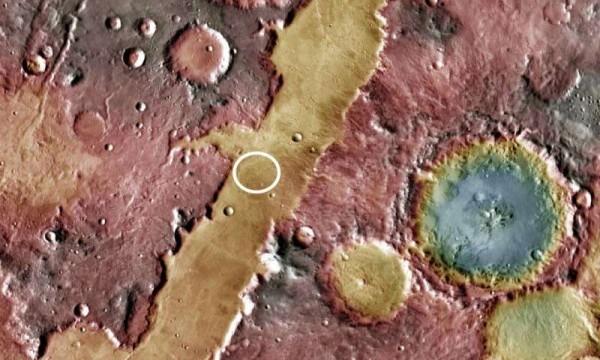 One of the Martian craters found to have a glass deposit lies in the Nili Fossae trough (pictured directly above–the suspected glass deposit is in the blue-colored crater), which is about 450 miles long. NASA is evaluating various sites for its 2020 Mars rover, and the presence of glass with possible signs of life may bump this site up in the rankings.

The study from Brown University researchers was published in the scientific journal, Geology.