When you hear the words “virtual reality”, more often than not you will first think about games or sci-fi computers, not necessarily in that order. And while entertainment is still indeed the most common application of VR even today, the nascent market is slowly growing out of its shell and into more serious use cases. Like web browsing, for example. Mozilla has just announced the existence of MozVR, its own attempt to bring virtual reality and the Web together into one seamless, and still game-like, experience.

Actually, if one recalls films like Johnny Mnemonic, VR can be used for more than just games and watching 3D videos. They can also be used for computer user interfaces, like crawling inside a computer or through some incarnation of the Internet. Whether or not those actually turn out to be more usable is a debate better left for another day. The fact is that it’s a technology that is still quite open to experimentation, and Mozilla wants to be one of the first of its kind in that space.

MozVR isn’t an app or a game. Since this is the Firefox creators we’re talking about, it is, of course, a website. But it is a VR website about VR website, trying to pool together and share thoughts, theories, experiments, and experiences about the “VR Web”. To get the ball rolling, Mozilla already contributed source code, tools, and tutorials for building your own VR experience for the Web. 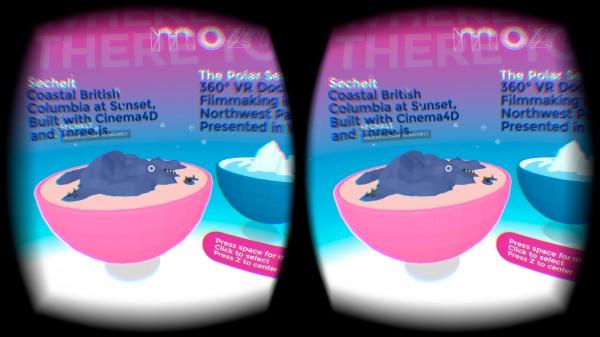 But what would that experience be like? Naturally, it will still take on a more gaming-oriented feel, at least until we come to a point when our brains no longer view VR as such and see it just like we see a keyboard and a mouse today. Menus and loading indicators are shown as HUD layers that can be dismissed, while jumping from one page to the next is compared to teleportation. Mozilla describes it as one VR world seamlessly dissolving into another VR world.

The MozVR website is open for everyone to see, but to really experience its “VR-ness”, you will of course need the right equipment. First and foremost, you will need a special version of Firefox built with VR enabled. A build for Chromium is also available for those who prefer the other web browser. And you will definitely need a VR headset. At the moment, the Oculus Rift is the officially supported hardware, but Mozilla plans to move to a more device-agnostic setup in the future.