First announced back in late 2009, the Motorola CLIQ was not only the company’s first attempt at an affordable Android QWERTY phone but the debut for MOTOBLUR. It’s taken over a year for the true successor to emerge, the Motorola CLIQ 2, and Android, MOTOBLUR and the smartphone segment in general have undergone some significant changes in the meantime. Has Motorola done enough with the CLIQ 2 to stay competitive? Check out the full SlashGear review after the cut.

The overly-plastic construction of the CLIQ and its flexing keyboard have been replaced on the CLIQ 2 with a more solid build all round. At 4.57 x 2.35 x 0.57 inches and 6.17oz it’s actually slightly longer and wider than the first-gen model, but a little thinner; still, it’s a fairly chunky handset all the same. It feels solid and reassuring, however, while the soft-touch plastic on the back is tactile and grippy. 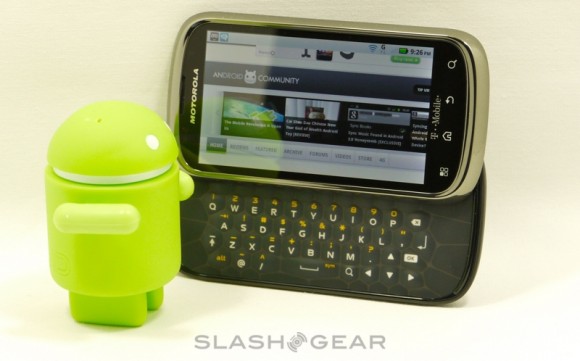 Similarly, the QWERTY slide leaves us with little doubt that the CLIQ 2’s keyboard mechanism will outlast the average carrier agreement, offering a nice balance of spring-assistance. As with any smartphone offering a physical keyboard, the price you pay is extra bulk, and we’re not entirely confident that every user will find the hardware buttons sufficiently rewarding for that compromise. Unlike the angular keys of the CLIQ, the CLIQ 2 uses a membrane pad with hexagonal bumps for each button. That adds up to mediocre travel and poor feedback while typing, both of which slowed down our text-entry speed.

When you take into account that the CLIQ 2 gets the same sort of 3.7-inch 480 x 854 capacitive touchscreen as the DROID 2, leaving plenty of room for a well spaced on-screen keyboard, it’s harder still to justify the phone simply because of its physical ‘board. The original CLIQ made do with a mere HVGA screen, leaving the soft-keyboard experience underwhelming, but we can’t say the same of the CLIQ 2. In fact, its display is solid for a mid-tier handset, though relatively narrow viewing angles and some washed-out colors do leave it lagging behind the newer Super LCD and Super AMOLED devices. 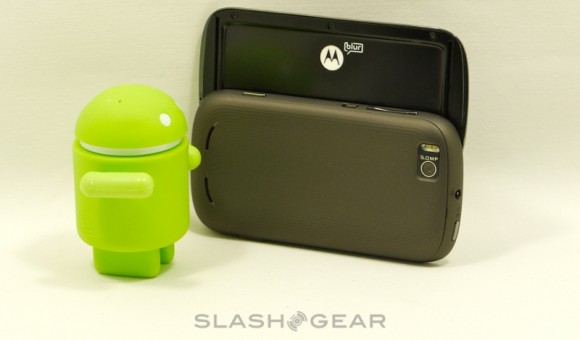 Underneath the display are four touch-sensitive buttons, while the power key is up top – next to the 3.5mm headphone socket – and the volume rocker on the right side. Happily the physical mute switch from the CLIQ has also been carried over, and there’s a two-stage camera shortcut. On the back is a 5-megapixel camera with auto-focus and an LED flash, while underneath is the SIM slot, microSD slot and standard 1,420 mAh battery. 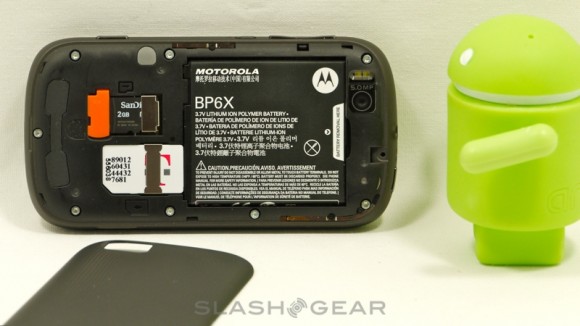 In the box there’s the CLIQ 2 itself, a 2GB microSD card, wired stereo hands-free kit, an AC adapter and a microUSB cable, along with a basic getting-started guide.

The first CLIQ launched with Android 1.5 and debuted MOTOBLUR; in the interim period we’ve seen Android 2.3 Gingerbread debut, and Google’s OS make huge strides in UI and usability. Many of the original problems which MOTOBLUR attempted to solve are no longer present, and users have grown wary of manufacturer skins since they generally slow down the later release of core OS updates. 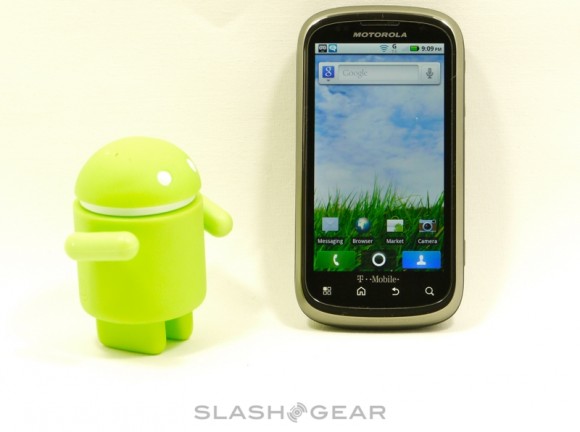 The CLIQ 2 offers Android 2.2 Froyo out of the box, and gets the latest iteration of MOTOBLUR. As with other recent MOTOBLUR devices, the system is a lot less demanding of users – you no longer need to create a specific account, for instance – and it’s easier to ignore if you’d rather use Android’s regular functionality. Still, the seven homescreens and dynamically-resizable widgets are useful, and the Happenings stream of updates from your Facebook, Twitter, MySpace and other social networks can be useful. A universal inbox pulls in all emails, messages and other updates, but we found it too easy to lose important messages in among the flood. 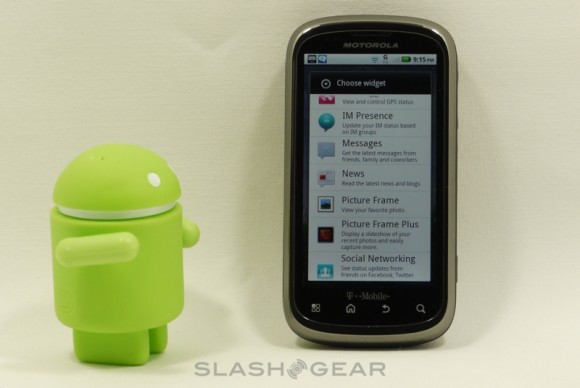 Otherwise there’s the usual offering of Google apps, including Gmail, Google Maps and access to the Android Market. T-Mobile preload the Swype keyboard along with an instant-messenger app with cross-platform support for AIM, MySpaceIM, Windows Live Messenger and Yahoo! Messenger; there are also suggestions for other downloads in the T-Mobile AppPack. Finally, you get Flash Player 10.1 for in-browser streaming video, games and widgets.

Unfortunately, despite the 1GHz processor, the CLIQ 2 doesn’t feel as fast as other Android devices on Froyo. Part of the blame has to be shouldered by MOTOBLUR, the persistent updating of which can weigh the system down. Generally, though, the phone felt less snappy than, say, Motorola’s own DROID 2.

With 5-megapixels and 480p video capture, the CLIQ 2’s camera doesn’t really take on the HD abilities of recent Android rivals. Still, it’s a solid offering. In decent lighting conditions the auto-focus is swift to lock and produces crisp images with minimal noise. Colors are well balanced, though can lack saturation at times leaving them somewhat underwhelming compared to the output of rivals.

In low-light, the shortcomings of an LED flash become clear; as ever there’s a sweet-spot within which the flash can do an average job of illuminating the subject, but outside of that position it either over-saturates or falls well short of providing sufficient light. Video, meanwhile, isn’t going to replace a regular camcorder, but the final clips are solid given the resolution limitations and the CLIQ 2 managed to handle low lighting particularly well, something we’ve seen 720p-capable phones stumble at.

Phone performance was not the original CLIQ’s biggest strength, and sadly that mediocrity has been carried over to the CLIQ 2. Motorola’s CrystalTalk Plus technology usually does a solid job at noise reduction, and we were reasonably impressed with it on the DROID 2, but the CLIQ 2 suffered from noticeable background hiss. There’s WiFi call support, but it’s worth noting that T-Mobile will still take any calls you make off of your bundled minutes; instead, we’d opt for something like Skype, which is free.

Motorola suggests up to 7.9hrs talktime or up to 13 days standby from the CLIQ 2’s battery, though the reality depends very much on how heavily you take advantage of MOTOBLUR. With regular updates through the day we drained the smartphone by mid-evening; shutting down some of the social networking apps helped prolong that, though at the expense of the user experience.

Compared to its predecessor, the CLIQ 2 is a huge improvement. The display and build-quality are particular stand-outs, as is the performance from the 1GHz processor, and we prefer MOTOBLUR when it’s not so all-encompassing. Unfortunately, it’s still not the perfect smartphone: the QWERTY keyboard falls short of the usability you’d expect, and we prefer the ‘board from the T-Mobile G2.

Both the CLIQ 2 and the G2 are priced at $99.99 (with a new, two-year agreement and rebates) from T-Mobile, and in the end we prefer HTC’s handset over the Motorola. The CLIQ 2 is a solid option, but it lacks the sparkle necessary in today’s crowded smartphone marketplace.