Coffee shops — cafes, if you prefer — are a staple for many, serving as the perfect destination to stop for a mid-day meal or that necessary cup of coffee. As the proliferation of mobile technology increased over the years, these shops came up with a simple idea to draw in more customers: free Wi-Fi. There was a time when such an offering was a novelty, but over the years it has become so expected that cafes without it are seen as odd relics.

This method for drawing in more customers worked. Laptop users would break out from the confines of their dorm rooms or office and head to the local shop, studying or doing work in a situation less isolating, the fragrant smell of pastries and coffee all around.

Such a business ploy gradually shaped the modern coffee shop in terms of both business and perception. To modern America, the idea of coffee shops and laptops/tablets not going together is strikingly odd. What started as a novelty courtesy service to draw in customers transformed the nature of the industry as a whole, and shops coast to coast began to suffer for it.

That’s when the bans started. 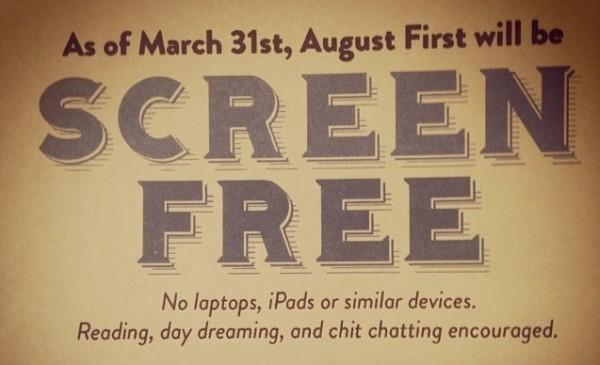 Some coffee shops elected to pull the plug on their router, nixing their free Wi-Fi service altogether; others limited the amount of time a customer could use it, enforcing it with the use of one-time codes. Others disincentivize patrons by covering outlets, limiting them to the duration of their device’s battery life, or by drastically throttling speeds, making the service all but useless.

Never to be foiled, technology sidestepped this minor issue with the now-common use of tethering dongles and phone apps. Coffee shops had transformed themselves into a destination for laptop use, and that perception has stayed long after these same shops changed their mind and started cancelling their service plans.

Such has ushered in the new wave: complete bans on laptops and tablets.

The phenomenon started years ago as a bid to free up space used by laptop users who would stay for hours on end, packing a shop but — relatively speaking — investing little into it. Latest among these is the August Fire Bakery & Cafe in Vermont, which wholesale banned all tablets and laptops with the turn of the month back in April. Says the company, sales increased following the ban, despite some grumbles from patrons.

The shop’s owner Jodi Whalen talked about the matter to NPR, saying, “To walk into a place and see people looking at their screens with a blank stare, it takes away just kind of the community aspect of it — of you being in a place with other people.”

This, of course, begs the question: where is the tablet and laptop user to go? Internet cafes and bars, while fitting the bill, are few and far between for many in the United States, and many libraries lack the atmosphere that is a coffee shop’s biggest perk. No doubt a tech-free coffee shop has its place and holds its own special allure, but as these companies struggle to adjust to our gadget-centric world, laptop users are increasingly left wandering from one cafe to the next in search of an outlet and free table.