Mophie are back, with the third incarnation of their Juice Pack iPhone battery cradle. The Mophie Juice Pack Air claims to have answered most of the criticisms of the earlier models, while still offering to almost double iPhone 3G runtime. Is this a must-have cradle, or just a cradle of filth – SlashGear set to finding out.

The iPhone and iPhone 3G have many fanatical advocates, but it’s trickier to find owners content with the smartphone’s battery life. With the semi-constant use the handset invites, the battery gage can easily drop from full to empty in less than a day. To address that, the Juice Pack concept is simple: take a second battery, squeeze it into a cradle, and charge the iPhone while you’re carrying it.

Mophie’s initial cradle, for the first-gen iPhone, and the Juice Pack for the iPhone 3G, took the form of a partial sleeve, into which the smartphone slotted. The top and upper edges were exposed, meaning no standard iPhone case would fit over it, and they added quite a bit of depth to the handset. 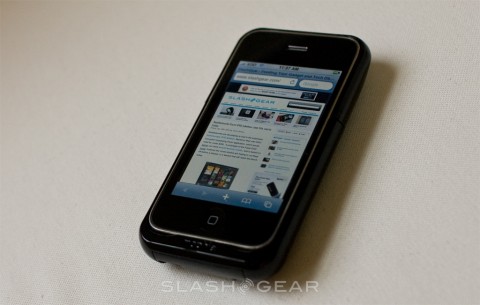 With the Juice Pack Air, Mophie have extended physical protection all the way up and around the top of the iPhone. A slide-off top piece allows you to slip the iPhone 3G into the battery cradle, with cut-outs for the camera, lock button, headphone jack, ringer switch and volume rocker. The front of the iPhone 3G is left unprotected, however. With iPhone 3G ensconced, the whole thing measures 0.75-inches thick and is around 20-percent heavier.

Mophie have also significantly changed their materials: gone is the distinctive (if not universally popular) lime-green lining, as well as the soft-touch rubberized outer coating, to be replaced by gloss-finish black plastic. We miss the non-slip coating more than the lime-green, though at a casual glance from the back you could perhaps now mistake the Juice Pack Air for an unprotected iPhone.

Controls on the Air are simple: a row of LEDs and a push-button on the back show charge status, while a new charge switch allows you to hold off from rejuicing your iPhone until you particularly need the power. Also on the base is a microUSB port, used not only to recharge the Juice Pack Air but to sync the iPhone 3G; Mophie provide a suitable cable. 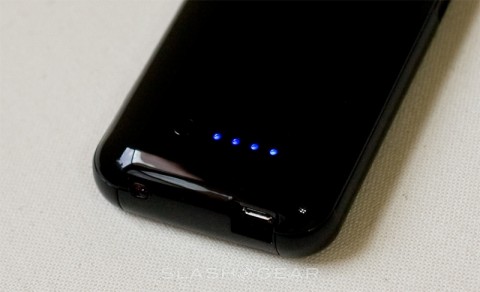 To reduce depth, Mophie have slimmed down the Juice Pack Air’s battery: where the original and its first successor had an 1,800mAh pack, the Air makes do with 1,200mAh. That’s not actually enough for a full recharge of the iPhone 3G’s internal battery, and you’ll only see between 80 and 90-percent of the gage topped up.

From that, Mophie suggest the Juice Pack Air is good for an additional 270hrs standby or 4.5hrs 3G talktime/9hrs 2G talktime. Alternatively you can surf the ‘net for an extra 4.5hrs over 3G or 5.4hrs over 2G, listen to 20hrs more music or watch 6hrs more video. Fully recharging both the iPhone 3G and the Juice Pack Air takes around 2.5hrs from flat. We found the Juice Pack Air offered around 80-percent of those figures in practice, certainly enough to take us through a full day of use, but falling short of the Juice Pack for iPhone 3G with its 50-percent bigger battery.

We’ve taken several of Mophie’s previous-gen cases along with us to CES and other shows, and they’ve proved life-savers for keeping the iPhone 3G running despite heavy use. With the Juice Pack Air, Mophie have answered most of our criticisms, particularly when it comes to protecting the edges of the iPhone, and limiting bulk. We’d still like to see some sort of touchscreen protection added, and the glossy outer casing feels cheap and is more slippery to hold than previous versions, but generally this is a must-have product for any standard iPhone 3G user. Those who tend to particularly hammer their battery should still look to the Juice Pack for iPhone 3G, but mainstream owners may find the new protection and reduced heft – together with the cheaper $79.99 price – make the Mophie Juice Pack Air a more balanced choice.