Monopoly is getting a Mario Kart makeover

Mario Kart die-hards take note, because the next entry in Hasbro’s Monopoly Gamer line is going to be themed around everyone’s favorite kart racer. Monopoly Gamer is a relatively new spin-off for the classic board game, which kicked off last year with a release themed around the cast of Mario. Like last year’s release, Monopoly Gamer: Mario Kart will change the rules of Monopoly drastically, incorporating items and tracks from the game series as best as a board game about becoming a property baron can.

For example, Monopoly’s paper money has been replaced by coins in this release, and every time someone passes Go, a Grand Prix kicks off. Players pay coins to enter the Grand Prix and, depending on where they rank, can win prizes. There’s also a special power up die that allows you to use items from the Mario Kart series, which of course can have adverse (and probably infuriating) effects on other players in the game.

You’ll still be buying properties as you circle the board, but the winner is not determined by bankruptcies. Instead, players will attempt to rack up points throughout the course of the game, and when the last Grand Prix card is drawn, those points are tallied and a winner is decided. In the end, it sounds like a fun little twist on traditional Monopoly, especially if you’re a Mario Kart fan going in. 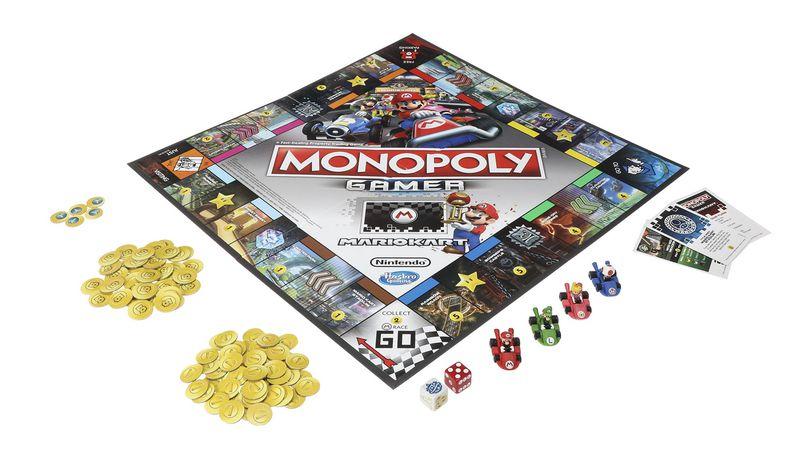 The game ships with Mario, Luigi, Princess Peach, and Toad character tokens, which is a fair number fewer than a standard Monopoly game. Hasbro is selling additional characters such as Metal Mario, Rosalina, Yoshi, Donkey Kong, and Bowser through mystery figure packs, which are available for pre-order at GameStop now. These won’t launch for a while yet, as GameStop currently lists a May 30 release date for them.