Moment 2.0 makes your iPhone, Pixel feel more like a camera

The Google Pixel and Apple iPhone are often touted as the best of the best when it comes to smartphone cameras but, true or not, they’re not exactly perfect yet. Some compromises have to be made for the sake of cost and portability, relying on after-market accessories to fill in the gaps. Wide-angle lenses, for example, are the most common ones. Moment 2.0 aims to do just that, but it’s not simply slapping on a lens. It is also slapping on a case on your phone to slap the lens onto.

The olloclip once had the virtual monopoly of external lenses that fit over iPhones, but it had one fatal flaw. Until recently, it wasn’t possible to use an olloclip and an iPhone case at the same time. While ollo eventually put out the ollo Case for that purpose, others already got the message and worked on their own spin.

Moment was one of those and it put out a lens and case system that, somewhat ironically, only worked together and not without the other. You put on a case around the iPhone to give it both the look, feel, and even shutter button of a DSLR and then you mounted a lens to the case as the need arises. With Moment 2.0, the company has gone to Kickstarter for a newer design that embraces not just more iPhones but the Google Pixel as well. 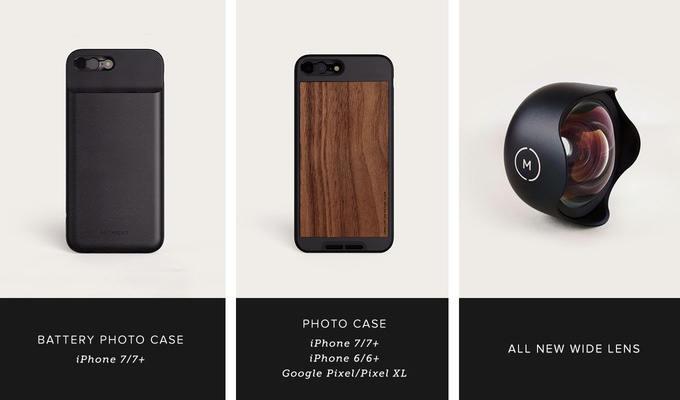 As before, you have a Wide Lens that adds wide-angle capabilities to the Pixel as well as any iPhone between the iPhone 6 and the iPhone 7. There’s also the Photo Case that provides a thin layer of protection to the phone while also providing the mount for attaching the Moment V2 lens. And then there’s the Battery Photo Case, which adds a 2,500 or 3,500 mAh battery on top of what the iPhone 7 has. Plus, it also provides a physical shutter button for a more natural feel to taking photos. Sadly, unlike the lens and the photo case, this one is available only for iPhones.

It seems that such accessories, no matter how silly they may look to some, has some appeal for some users. The Moment 2.0 Kickstarter has already raised more than its $500,000 funding goal with more than enough time to spare. While the cases can be selected separately, lenses are bundled with cases. If all goes well, the Moment 2.0 kits will ship to backers in July.