Details emerged earlier this month about Apple’s plans to overhaul the Maps application for iOS. Cupertino is said to be ditchong Google Maps in favor of its own internal offering, put together using the various mapping company acquisitions it’s made over the past several years. BGR claims to have some new images of the maps that will be used in iOS 6, and has created a very rough mockup of what to expect from the redesigned Maps application.

BGR was handed photos of certain map elements, as well as some blurry shots of the maps that have been created by C3 Technologies. Based on those elements and information given to them by the source, BGR created a mockup of the new Maps interface. The search bar is still at the top, but Direction and Bookmark icons now sit to the left and right of the bar respectively. The blue color scheme has also been replaced with a silver one.

The “Locate Me” button has been placed in the bottom left of the application, and once you peel back the maps in the lower right corner, you’ll gain access to additional options. One of those options includes a 3D mode that makes use of C3 Technologies three dimensional maps. Once that mode is enabled, you can exit out of it by tapping a 3D icon in the lower left of the screen once again. 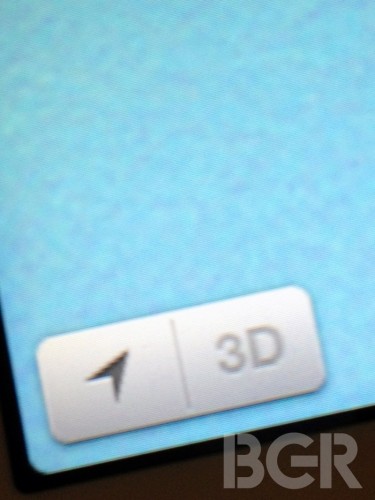 9to5Mac first detailed the dramatic changes that Apple would be making to Maps earlier this month. They too detailed how the application would be rewritten, feature a new icon and color scheme, and would leverage C3’s 3D maps. iOS 6, along with the new Maps app, is expected to be unveiled at WWDC on June 11th. We’ll be bringing you all the details live from the event, so make sure to keep an eye on our liveblog.