Mitsubishi first unveiled several new HDTVs earlier this year at CES 2011. Leading the lineup was the massive 92-inch 3D DLP Home Cinema TV that we got a closer look at inside the Mitsubishi Mobile Marketing Showroom. Excitement for the TVs were ramped up, but availability and pricing details were kept vague. Today, however, the entire lineup finally gets officially priced.

Mitsubishi’s 2011 HDTV lineup includes the 640, 740 and Diamond 840 Series, and LaserVue series. The 640 series 3D DLP Home Cinema TV Series offers the most value along with high quality performance in a 73-inch screen size for $1,599.

The 740 series steps things up a bit with a built-in 3D IR emitter, wireless internet connectivity, and various TV apps. A 73-inch and an 82-inch are available for $2,099 and $3,499, respectively. A LaserVue edition for this series is available in a 75-inch size that adds Clear Contrast Screen, built-in WiFi, 4 HDMI inputs, and up to 120Hz variable smooth film motion, among other new features. 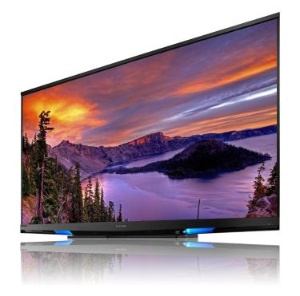 IRVINE, Calif.–(EON: Enhanced Online News)–Mitsubishi Electric Visual Solutions America, Inc., the leader in large-screen television, is going big in 2011, unveiling its new 2011 television product line-up led by a massive 92-inch 3D DLP® Home Cinema TV. With advancements to its complete product line, Mitsubishi’s new “Go Big” strategy aims to make its large-screen TVs the de facto standard for immersive 3D home entertainment. New models include cinema-like DLP TVs ranging from 73- to 92-inches, along with Mitsubishi’s 75-inch LaserVue®, the world’s only laser-powered TV, which has been hailed as “…the best looking consumer-level set we have ever laid eyes on…” by Engadget. (*1)

“They want TV entertainment on an order of magnitude larger than what they’ve experienced up to now.”

“Bigger is better, especially as 3D captures the imagination and passion of consumers who want more from their TV viewing,” Wasinger added. “They want TV entertainment on an order of magnitude larger than what they’ve experienced up to now.”

“Consumers are realizing that to fully enjoy 3D with eye-popping clarity and depth of field, you need size and speed,” adds Wasinger.

Mitsubishi’s new Diamond 840 Series, which includes its flagship 92-inch 3D DLP Home Cinema TV, comes with a range of new enhancements and upgrades. These include a new Clear Contrast Screen that mitigates ambient light through a specially-formulated screen material to deliver deep blacks, bright whites and a wide range of colors in between. Equally impressive is the Diamond 840 Series’ integrated Immersive Sound Technology (IST) 16-speaker Dolby® Digital 5.1 surround sound system that delivers perfectly balanced home theater audio, without the need for separate components. Paired with a wireless sub-woofer from Polk Audio, consumers can enjoy a truly unique audio system—it’s like 3D for the ears.

Also new this year is the latest energy efficient 75-inch LaserVue model that delivers gorgeous picture quality in a range of colors unmatched by any display technology, including LED. The new Clear Contrast Screen delivers blacker blacks and brighter whites along with improved overall contrast in more brightly lit environments. LaserVue, with Mitsubishi’s proprietary laser light engine, combines this incredibly pure light source for precise colors with DLP technology for razor sharp 3D and high-definition viewing. At the same time, Mitsubishi’s laser technology makes this television one of Energy Star’s most efficient: It consumes only 84.6 watts, one of the lowest watts-per-inch ratio in the industry. (*2)

Mitsubishi 740 Series 3D DLP Home Cinema TV Series. A new built-in 3D IR emitter, and StreamTV with high-def and 3D movies from VUDU, as well as 100 applications for sports, news, social media and entertainment, make this the perfect model for serious TV lovers. In 73- and 82-inch screen sizes with prices of $2,099.00 and $3,499.00, respectively, features include:

Mitsubishi L75-A94 LaserVue. A new Clear Contrast Screen, with VUDU movies and applications, this 75-inch large-screen laser TV is one of the most visually stunning consumer TVs in the world.

From 740 Series, the LaserVue adds:

All other trademarks are the property of their respective owners.

*See http://www.engadget.com/2010/06/23/mitsubishis-laservue-hdtv-makes-triumphant-75-inch-return-beco/
** LaserVue on mode power efficiency measures under 40mW/sq.in which is lower than any television listed in the EnergyStar TV database as of May 2, 2011. See http://www.energystar.gov
*** Features, specifications and dimensions are subject to change without notice.