Engineers from MIT have created a new type of plant that glows brightly and could be used to replace electric lights at night. The engineers embedded nanoparticles in the leaves of a watercress plant allowing the plant to give off a dim light for nearly four hours. The team believes that they can improve the technique to make the plant bright enough to illuminate a workspace.

The vision according to Michael Strano, the Carbon P. Dubbs Professor of Chemical Engineering at MIT, is to make a plant that can function as a desk lamp. This lamp needs no electricity and is powered by the metabolism of the plant. The researchers think that the technology they are working on could one day turn trees into self-powered streetlights. 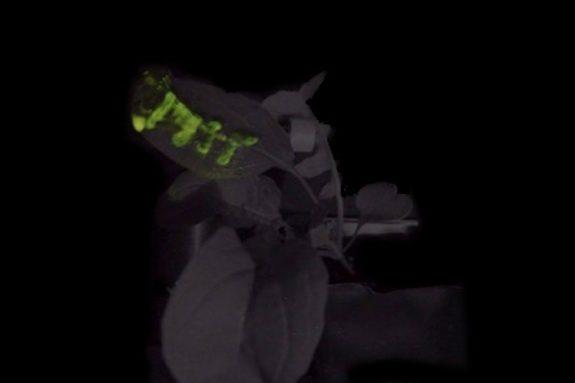 The team calls their technique “plant nanobionics” and the new technique comes from the same lab that has in the past created plants able to detect explosives and communicate information to a smartphone. The team used an enzyme called luciferase that emits light. That is the same enzyme that allows fireflies to glow.

The Luciferase acts on a molecule called luciferin and causes it to emit light. The team also uses another co-enzyme to help the process along that eliminates a reaction byproduct that can inhibit the activity of luciferase. All three of those components were embedded into a nanoparticle carrier.

The nanoparticles are “generally regarded as safe” by the FDA and are about 10-nanometers in diameter. To get the particles into the leaves of the plants, the plant was immersed in a solution and then exposed to pressure allowing particles to enter the pores or stomata of the plants. The materials in the nanoparticles then create the greenish glow seen in the images.