“22 miles…now 19. Scratch that – down to 18.” I ask my co-driver, Automobile’s Eric Weiner, to repeat that last number and he does, a note of concern creeping into his normally relaxed voice, augmented by rivulets of sweat crisscrossing his brow. It’s not the tension of the moment that’s got the two of us soaking both our shirts and the front seats of the Mini John Cooper Works convertible we’re riding in across the California desert. It’s the fact that, with just a sniff of fuel left in the tank, we’ve got the air conditioning switched off and the windows rolled down in the 118-degree heat, sacrificing comfort in the name of please, please, please just let us make it to the fuel station that both the navigation system and my fuzzy memory of visits to 29 Palms past say should be just 10 miles away. And this sudden incline is killing us.

Weiner is a pro, hovering the John Cooper Works drop-top just a few feet behind the 18-wheeled hauler in front of us, an older hyper-miler’s trick to take advantage of about as much aerodynamic draft as you’d find on the inside row at Daytona. Our low-tech range-extending plan sounds stupid, but it works: once we crest the hill that had been sapping miles from the tank, the Mini’s trip computer begins a slow, but steady climb back towards a less frightening, not quite as sunburned depiction of our final moments on earth. The Chevron sign looms in the distance, and by the time we roll up to the fuel pump we’ve built a 28-mile cushion between laughter and disaster. We’re not the only ones taking advantage of this rare oasis of gasoline and Slim Jims, as almost every parking spot and fuel pump features a Mini of its own, dusty from the Mohave’s heat. 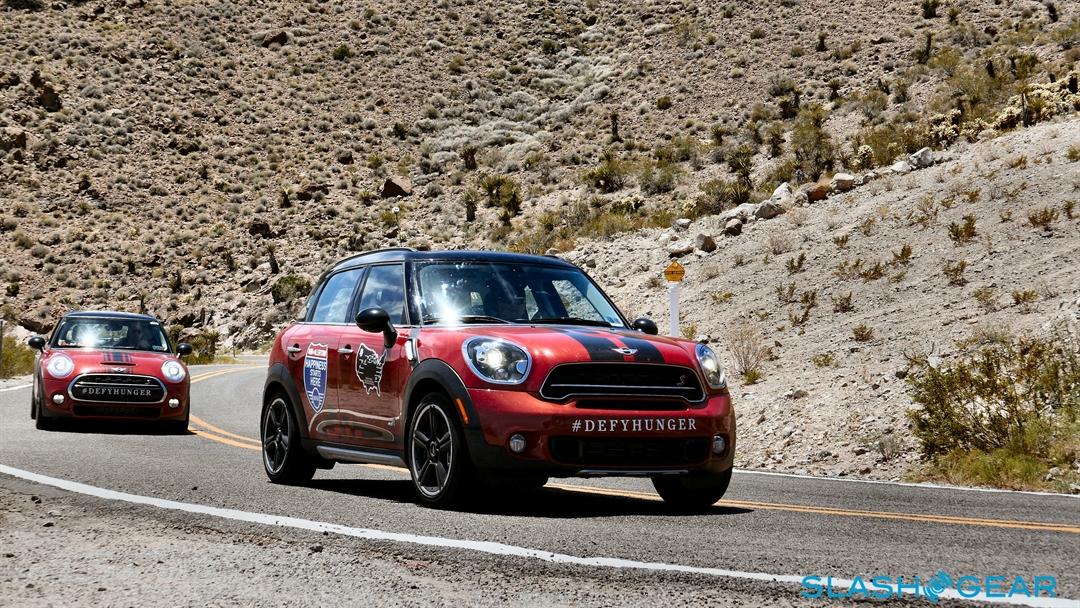 How did I end up surrounded by shimmering sand, wild burros, and 600 Mini Coopers of every possible description? My quest began earlier than morning in Las Vegas, Nevada, where I joined the final leg of Mini Takes The States 2016, a two-week rally that began in Atlanta, Georgia, and traversed the entire country in one long, almost-unbroken caravan of cars built by the British-cum-BMW brand. 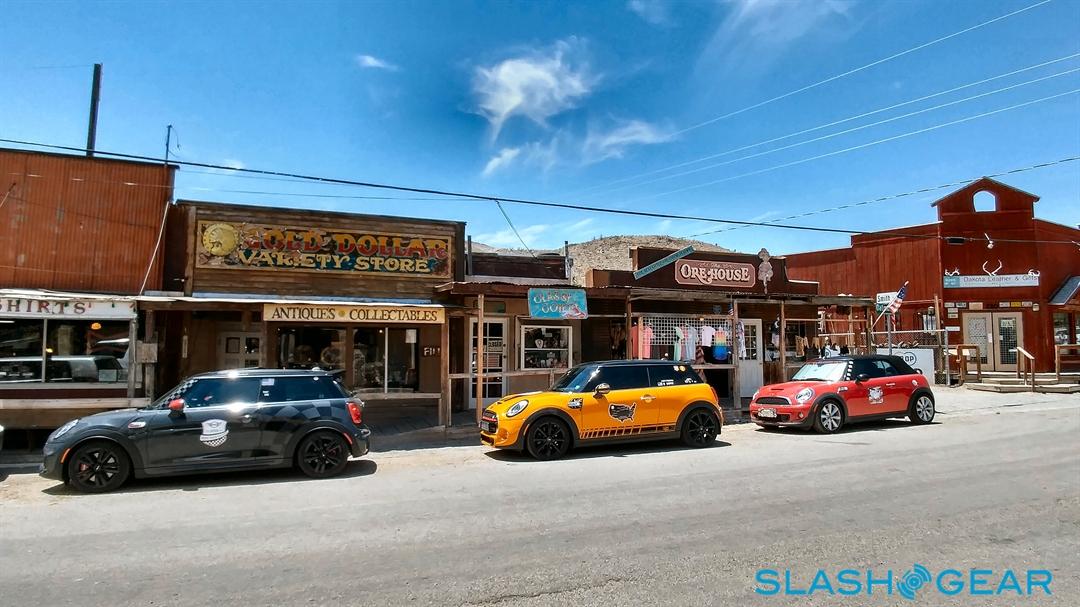 Mini Takes The States (or #MTTS as the ubiquitous hashtag shortens it to) is far from a one-off deal. The event itself has been running since 2006, plotting various routes across the continent in a bid to not only raise money for charity – this year’s cause is Feeding America – but also to tap into the overwhelming fervor that Mini owners feel for their automobiles. The very fact that on any given day there were roughly 1,500 Mini fanatics participating in #MTTS provides stunning proof of just how deep the love runs for a brand that is far from being a volume seller on this side of the Atlantic. 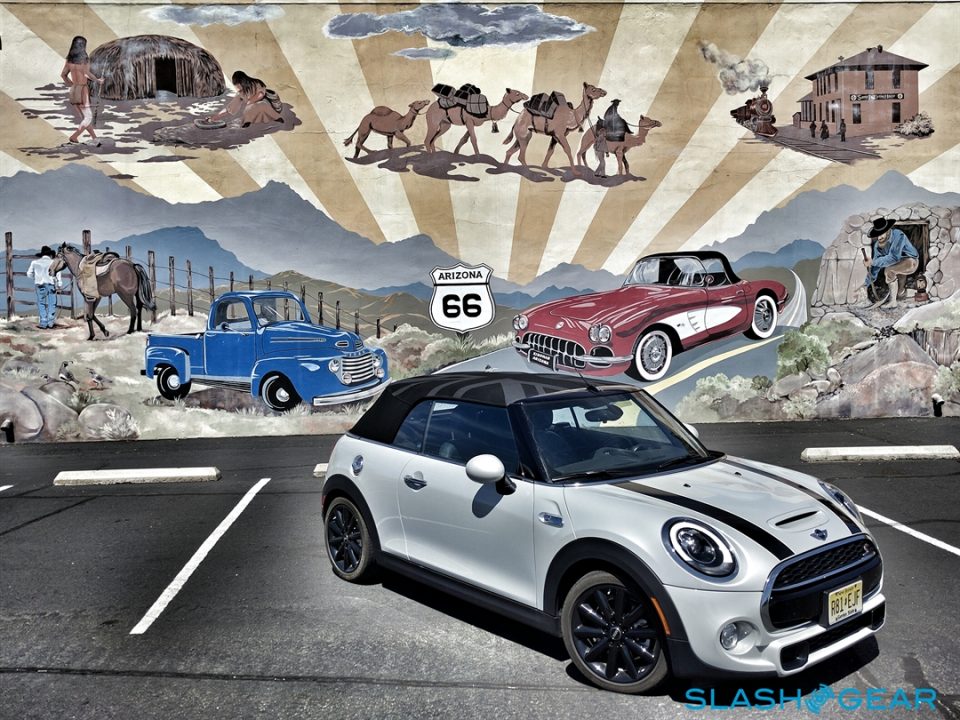 It’s not just the number of Mini owners taking part in the event that makes it so unique amongst company-led engagement efforts. It’s also the way in which those who participate choose to schedule their holidays around the road trip’s summer dates, wrap their cars in the most colorful of liveries, designs, and tributes to everything from cartoons to racing heroes, and then sticker-bomb them into oblivion to show their loyalty not just to #MTTS itself, but also to each other. Unlike other some car cultures where the originality of an automobile is fetishized to the point of uniformity, pervasive customization is the order of the day for Mini moguls, as even from the factory almost two-thirds of models sold feature a unique set of options. 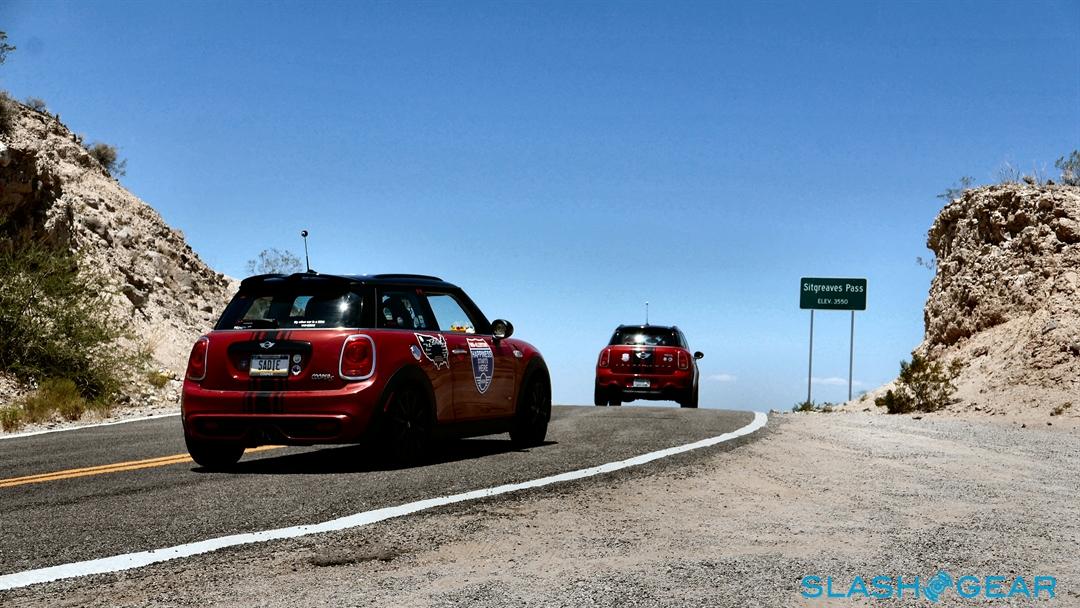 If there was ever any doubt that Mini driver are pack animals, that’s dispelled the instant you witness any encounter between two respective Cooper pilots out on the road. A shared wave is the minimum – a conversation is likely should they meet on the walk to the car – and once gathered in numbers sufficient enough to blot out the UNLV parking lot in Vegas, it’s a veritable convention of non-conformists, each an individual actor, never a cog, in the gears that keep the Mini machine churning forward. 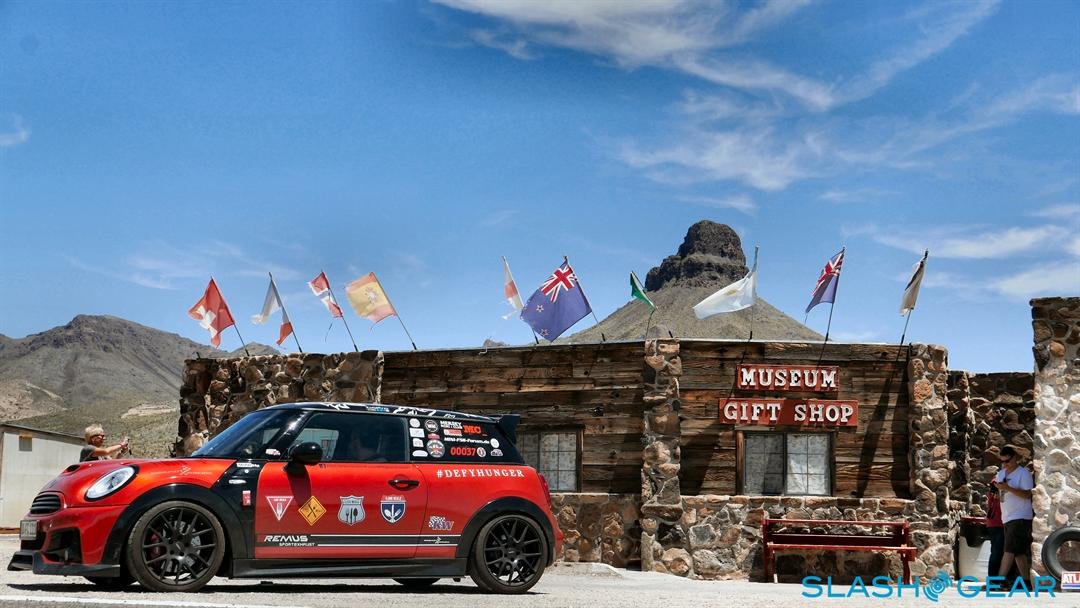 Although Mini Takes The States is a huge undertaking, in keeping with the individualistic inclinations of its participants the organization of the route itself is largely broad strokes. Weiner and I received the keys to the convertible John Cooper Works along a single sheet of paper containing one of the more confusing sets of directions in recent memory, and were sent out in the direction of Palm Springs, the final destination both for us and for the entire event that evening. 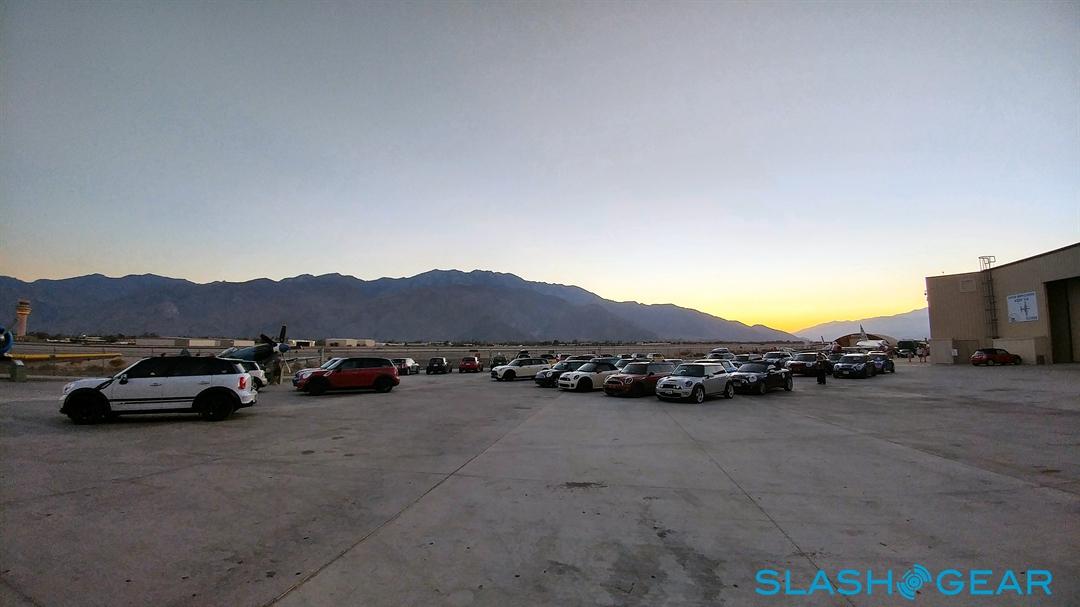 In many ways, the provision of but a few points of interest along the way to the #MTTS finish line is inspired, as it allows us to explore some of the more unusual highlights along the way. Eric’s ability to bloodhound twisty roads and avoid the tedium of highway travel takes us not just down the desolately beautiful remnants of Route 66 as marked on our official instructions, but also off-menu and into the mountains that ring southern Arizona’s flat plains. Along the way we pass through distant, single-street outposts such as Oatman, AZ, where we lunch in a bar whose walls are covered with over $100,000 in single dollar bills, and where I witness a feral donkey successfully attack and snack on a too-friendly tourist’s leather purse. 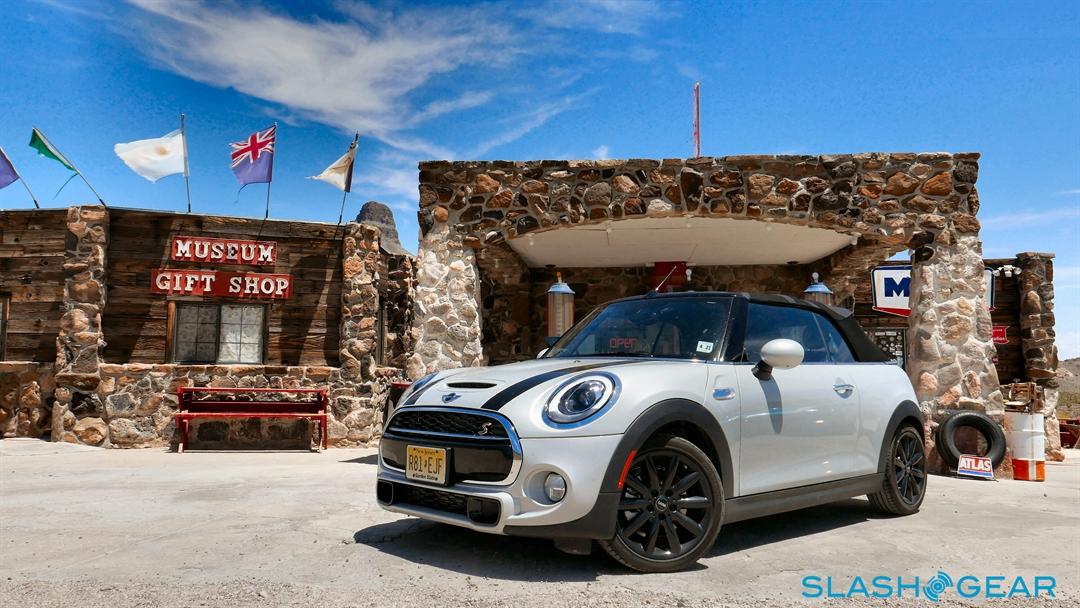 We also rarely see a gas station. On the last stretch, towards the end of the day, our attempt to fuel up and avoid having our bleached bones picked clean by heat-resistant vultures are thwarted twice: first, when the plaza we pull up to is locked up and serves only 87-octane fuel (that would be suicide for our hardworking turbocharged four-cylinder mule), and again when a supposed fuel stop turns out to have been reclaimed by the desert, with only a desiccated awning and fence draped with hundreds of pairs of sneakers there to witness our disappointment at being tricked by Google Maps. 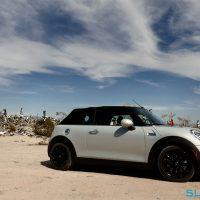 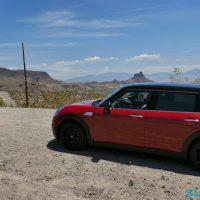 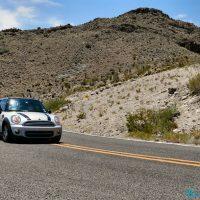 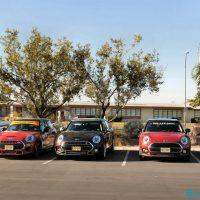 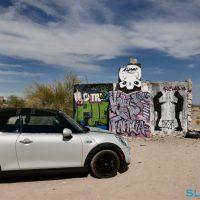 Sixty-five hot and sweaty miles later, however, and we’re saved. As we roll into the wrap-up gala at the Palm Springs Air Museum that evening, its clear that the party’s coda is merely a prelude to the next #MTTS, as owners buzz about under the wingtips of B-17 bombers and the drooping rotors of UH-1 Hueys. New friendships have been forged and old bonds renewed, and the energy in the room underscores Mini’s most impressive achievement: making people pour their hearts and souls into metal and glass until it’s transformed into something more. Until it’s family.