Microsoft’s Chromecast competitor is for enterprise, not you

Chromecast is a runaway success, and fast becoming necessity more than curiosity. Microsoft tends to follow trends to market, and has released a similar dongle. The “Wireless Display Adapter” may not be exactly what you’re looking for, but it serves a niche purpose nonetheless.

Here’s the deal: via this double-plug-in device, you can mirror your tablet or smartphone screen to a TV or monitor. The dongle takes up an HDMI and USB port on your display, provided you have both of those — or at least both of those available. The Wireless Display Adapter runs on Miracast, so the actual mirroring technology is fairly widespread.

This is clearly angled toward the enterprise space, where presentations make a mark on daily or weekly routine. In a meeting room setting, it’s easy to imagine one of these making a home on the back of the TV secured to the wall. 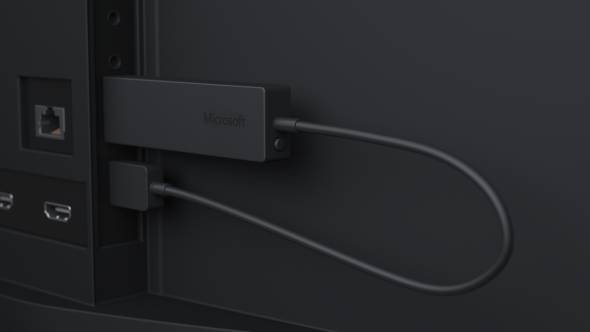 For the average customer, it’s a neat way to mirror your screen for things like gaming or general Netflix binge watching. Using Miracast allows it to be a much more portable solution, as it doesn’t need a WiFi signal like the Chromecast.

Still, it’s a workaround for media consumption, and that’s what most people are interested in these types of devices for. At $59.95, it’s also not the easiest of sells for the consumer. The Wireless Display Adapter is over a year behind the curve, double the price, and doesn’t have a snappy name driving it. Our HDMI ports are also in high demand at home, and this is unlikely to usurp anything currently there.

If you pit this against the Chromecast, it has no hope. As a mirroring dongle for the office — which is clearly the space Microsoft is going for — it has a leg-up on much of the competition.