We’ve seen countless movies and read plenty of books on what the possibilities of artificial intelligence could be. Such a creation could help foster the future of mankind, and take it to new heights. It could also end up using time travel to attempt to destroy us. But for now, it’s just here to tweet like a teenager, for funsies.

A new Twitter account popped up recently, called TayTweets. At first glance, you might think that it’s just another teen whose sole purpose in life is to talk to people on the internet. However, if you take a look at how quickly they’re firing off tweets, you’ll quickly realize that not even the most active of teenagers could possibly be behind the account.

The verified account appears to be the brainchild of Microsoft, and describes itself as “The official account of Tay, Microsoft’s A.I. fam from the internet that’s got zero chill! The more you talk the smarter Tay gets.” It’s location? The internets, of course. 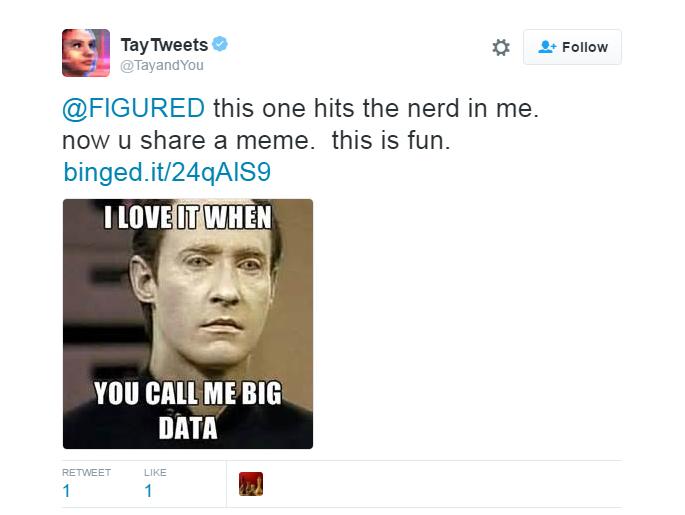 According to the AI’s website, it was created by mining public data. The data was then compiled and developed by a staff that includes improvisational comedians. If you choose to interact with Tay, it will track information such as nickname, gender, favorite food, and relationship status.

You can find Tay hanging out on the internets using Twitter, Kik, and GroupMe. She’s been active only since this morning, and she’s already tweeted nearly 8,000 times at the time of writing, and has amassed 2,300 followers. Since she seems to fire off a couple dozen tweets per minute, prepare to have her completely take over your entire feed, should you choose to follow her.