Right from the start, most of the talk regarding the Zune HD’s unveiling circled around whether or not the future of the Zune line-up would include applications. Would there be an application store, akin to its greatest rival? There wasn’t much surprise when Microsoft finally admitted that there would indeed be apps, and even less surprise from the fact that Facebook and Twitter were mentioned in there as well. It took a few months, but we have finally got Twitter on our Tegra-powered device.

Upon its arrival, the Zune HD didn’t have much in the way of apps. There were a few games, a calculator, and a weather application. But the games weren’t anything to write home about (unless you like splatting goo…), and the calculator application was, well, a calculator application. While they look great on the OLED screen, we still wanted more. And considering the impact that Twitter has had over the years, which continues to grow in the mobile world, we couldn’t wait to see what Microsoft had coming down the pipe. But now that we have it, we’re kind of wishing we could put it back. Maybe let it sit up there for a bit longer, so that these bugs we’re seeing would disappear.

First and foremost, there’s so much lag that it’s almost infuriating. Considering the power inside the Zune HD, we weren’t expecting this at all. Second, and we are seeing this from other sites like Engadget, our WiFi connection seems to be going haywire the longer we try and stay inside the Twitter app. And, what may seem to be the worst bug we’ve found, our icons don’t want to interact with our touches. We touch, and nothing happens. Simply put, it’s driving us crazy. And what makes it worse, is that the application itself looks very, very nice. Sure, all of these things can be fixed with a simple update, and we’re hoping this happens quick, or we might just have to give up checking all our precious tweets from the Zune HD.

UPDATE: Wow. Sure enough, it gets worse. A lot worse. And yes, we know it may not be that bad for some people, and we know that there are kids out there running around with a Zune HD who are going to go Twitter-crazy with this app, but there’s just something wrong about the fact the Twitter timeline is censored on the Zune HD. Down right ridiculous. Microsoft slips one under the fog that actively censors tweets as you use the app. This isn’t okay. Microsoft, please take note that this is the wrong way to go. Have an option for censoring, fine. Don’t censor our media without our consent. Here’s the image below, brought over from Engadget. 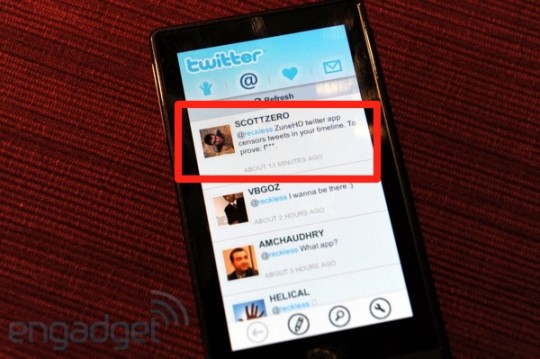