Microsoft has given its IllumiRoom concept a makeover, with the immersive projected gaming experience evolving to deliver interactive web content that fills the living room and engages with Xbox One, Windows Phone, and Windows. Dubbed Microsoft SurroundWeb, the concept relies on the same approach of using projectors to cast digital graphics onto the surfaces of real-world objects, like the wall surrounding a TV or the coffee table in front of it, which then react to the user within that space.

So, a table surface can be turned into a huge touchscreen controller, expanding the view from a smartphone or tablet, and tracking where the user touches on it. Alternatively, object-recognition can be used to deliver richer metadata.

For instance, Microsoft Research shows a Coke can being placed on the table, SurroundWeb spotting and recognizing it, and then projecting nutritional information around it.

Other possibilities could include projecting recipes onto surfaces in the kitchen, as well as live warning messages about hot stoves or rapidly expiring timers so that something in the oven doesn’t burn.

Microsoft Research is tackling privacy head-on, too, with the assurance that while the rooms of your home would be enriched with extra information pulled in from the internet, that doesn’t mean the camera-based system would be feeding back data to advertisers. “A page could show you an ad near a Red Bull can,” for instance, the SurroundWeb team suggests, “but nobody would be able to find out how much Red Bull you drink.”

Of course, gaming is a big part of the living room experience for many people, and SurroundWeb could be used there, too. While the TV is dominated by the game itself, for example, the wall around it might have IM chat, leaderboards, and other information projected. 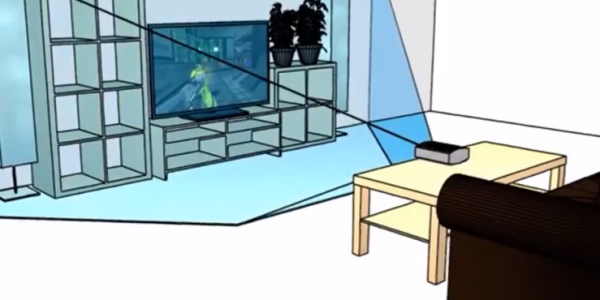 Despite hopeful gamers wanting IllumiRoom to be a part of Xbox One last year, Microsoft dampened down expectations before the console’s launch with confirmation that it would take several years at least before this sort of immersive projection would reach the market.

However, that hasn’t stopped the Microsoft Kinect team from looking at how motion tracking could be applied more broadly in the meantime. Back at Build 2014, Microsoft’s annual developer event, Xbox app and developer relations chief Michael Mott explained to us how Kinect for Windows v2 would reshape the living room, including controlling automation technology, tracking health, and even bringing Cortana out of Windows Phone and into the smart home.