Microsoft Surface: The great iPad attack is on

The Kraken awakes. Microsoft’s Surface tablets turned out to be a surprisingly direct attack on the iPad, rather than the segment-tweaking workarounds that had been predicted: not a gaming-focused Xbox slate, or a pared-back multimedia and ebook device, but an all-out assault on the market that, in the past few years, Apple has made its own. With two variants of Surface, however, Microsoft has hedged its bets a little. Is the stylus still relevant, has the finger taken over, or is the keyboard simply refusing to be dislodged?

I’m a fan of the stylus, and I’ve long praised Microsoft’s clandestine abilities with digital ink as a potentially strong but currently untapped resource for competing with the iPad and Android tablets. Where Microsoft went wrong with previous versions of pen-enabled Windows was treating ink – and indeed finger use – as a bolt-on rather than baking it entirely into the OS, something Windows 8 looks to be addressing.

Of the two models, though, it’s the Windows RT version that I expect to be most important – despite it not having a pen. Windows RT – previously known as Windows-on-ARM – is Microsoft’s big chance to take on the consumer tablet market, not only because it puts the focus predominantly on touchscreens (whereas Windows 8’s Metro UI on regular PCs still feels a little like the oversized interface you’d find on a computer for the kindergarten set) but because the hardware proposition will finally be able to tick the boxes of price, performance and portability.

In contrast, the Windows 8 Pro version of Surface is chunkier, heavier, will likely suffer in battery life – though Microsoft isn’t quoting runtime estimates, and the Intel-based model has a third-larger battery – and is, in short, much as you’d expect from an ultrabook with the keyboard cut off. And that’s something all of the stylus vs touchscreen talk sidesteps: the keyboard. Quite a few have spotted that, considering Microsoft is positioning Surface as its “ultimate stage” for next-gen Windows on a tablet, all of the official images – and much of the demo area at the launch – show it clinging to a keyboard cover, refusing to let go.

The Intel machine will be priced to match an ultrabook, according to Microsoft’s tentative predictions. The Windows RT model, however, will be positioned so as to compete with the iPad. Microsoft hasn’t said that outright – it fudged and said only it would be comparable with other Windows RT slates – but the company isn’t stupid and knows it won’t stand a chance if it labels the entry-level Surface above the iPad’s $499 opening price. 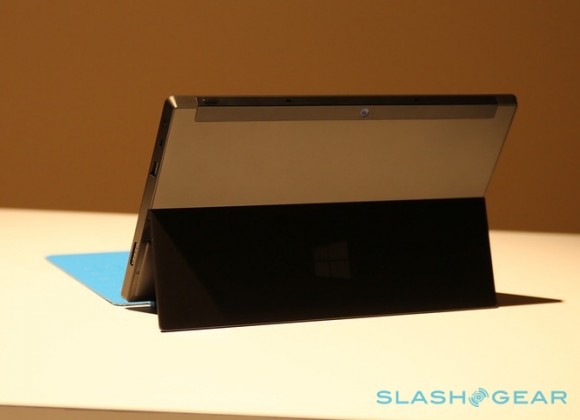 Cost is a huge initial hurdle, but it’s only the first. If the Surface range is to be successful – and indeed if Windows RT as a whole is to gain traction – then it needs a flourishing app ecosystem to challenge Apple’s and, to a far, far lesser extent, Android’s. Making it extra-tricky is the fact that Microsoft can’t view Surface as it does Xbox, as its single proposition within the market.

It’s unable to follow the example of Nokia with Windows Phone and attempt to curry inter-OS favor among consumers by promising exclusive apps like Nokia Music and Nokia Drive; as CEO Steve Ballmer said, Surface is “an important companion to the whole Windows 8 story [but] it’s not the only piece.” Microsoft already risks frustrating its OEM partners by wading into the hardware market, and enflaming that by withholding key apps for itself would be a coup de grâce of self-harm proportions.

There’s something quite fitting about Microsoft appropriating the “Surface” name from its touchscreen table range and repurposing it for a range of consumer tablets. The original multitouch table was a triumph of “can do” rather than “deliver”: geeks loved it but only a tiny percentage would ever actually get their hands on one, even with Microsoft’s deals with hotels and retailers. This new Surface, meanwhile, must achieve something considerably more than skin deep if Microsoft is to stand a chance at building momentum with Windows.

The first step of that went well: a high-profile launch with little in the way of pre-show leaks, and plenty of attention. Praise for the initial hardware, too: considering the number of corner-cutting plastic Android tablets, and how poorly they’ve been received in comparison to the premium-feel iPad, that’s no small element of the overall package. Still, like a discretely paddling duck on the water, Microsoft would do well to frantically get its pieces into place behind the scenes while it stays poised and confident on the Surface.