Microsoft puts Windows 10 on a diet for low storage devices

The words “Windows” and “lightweight” don’t usually go together, unless bridged by a negation. However, with Microsoft‘s push to make Windows 10 a universal OS for all its devices, it cannot but put the operating system on a crash diet to fit devices with as little as 32 GB of storage. Microsoft claims that it has made significant strides in that aspect, thanks to changing the way recovery is done as well as making Windows smarter about how it compresses system files depending on the hardware capacity of the device.

Windows is notorious for taking up a lot of disk space, and that’s not even counting the space taken up by apps like Office and essential ones you’ll need to install later on. On powerful gaming rigs, that might be a nuisance at best, but for budget tablets and laptops, and especially smartphones, that’s just not going to fly. Even if you have a microSD card available, when the system eats up your main storage, you’re done for. So how is Microsoft dealing with that problem? It claims to have two weapons prepared.

The first is compression. Windows already compresses some files, but in Windows 10, it is promised to be even smarter and more efficient. It now takes into account the hardware of the device, particularly RAM and CPU. Why these two? The amount of RAM basically dictates how much data it can hold at a time, which, in turn, determines how often the system will have to fetch data from storage and dump them into RAM for faster access. CPU, on the other hand, will determine how fast it can decompress those compressed files without bogging down the system. All in all, Microsoft claims that as much as 1.5 GB can be reclaimed on 32-bit systems and 2.6 GB of 64-bit ones with this new compression system. And it will work not just with OS system files but even for those apps you install on Windows 10.

The other notorious storage hog is Windows’ recovery images. Windows 10 will actually no longer have any static recovery image taking up space on storage. Instead, the Reset and Refresh feature will actually build the operating system recovery image using currently installed runtime system files. This has two advantages. The first is that there is no more recovery image sitting there permanently even when you don’t need it yet. The second is that it already integrates the latest updates so you won’t have to redownload them all over again once restored. Of course, you can still create your own recovery images and store them in some external drive for use later on. Microsoft claims that around 4 GB can be reclaimed from this new implementation. 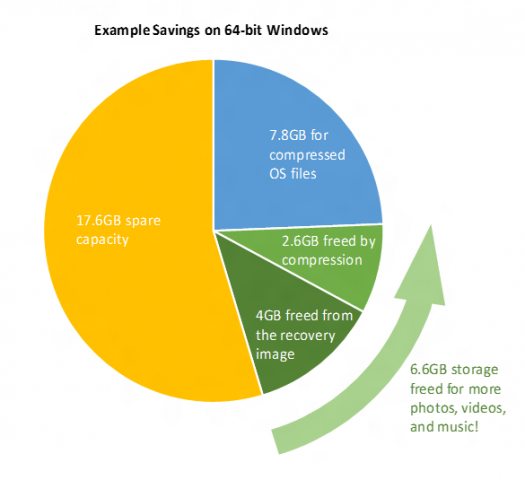 Of course, it all sounds quite tasty on paper, but we’ll need to see actual proof when Windows 10 does get released, whenever that is. It’s not all good news, however, especially for those who bought Windows 8.1 devices. Due to the special nature of the new WIMBOOT compression feature in Windows 8.1, OEMs that wanted to take advantage of that had to use a special installation process for their devices. Not only did it mean that WIMBOOT was available to a relatively fewer number of Windows 8.1 machines, something which Windows 10’s new compression technique aims to fix, it also means that it will be challenging for Microsoft to upgrade those to Windows 10. Both Windows 8.1 and Windows 10 need to co-exist side by side during the upgrade process to allow users to revert to Windows 8.1 when things go wrong. That said, Microsoft says it’s already investigating the situation, but this uncertainty could serve as a warning to those looking to buy low storage Windows 8.1 devices at the moment.