Microsoft patent explains the why and how of foldable phones

It’s not just enough to make phones that fold out into a tablet and vice versa. That has done before, with the Kyocera Echo and more recently the ZTE Axon M. And both show exactly why we still don’t have such ideal foldable phones available. That hasn’t stopped both tech companies and tech users from dreaming. Microsoft, whom people have looked up to for such a device since the days of the Courier, might have the answers in its latest patent. If only it actually acted on that patent as well.

One of the biggest problems in implementing foldable phones is the hinge. Even as bezels get thinner, some amount will still be required to implement a traditional hinge. The hinge also adds some amount of protrusion to the assembly, whether folded or unfolded, breaking the illusion of a single, unified, but foldable device.

Microsoft’s solution is to use a special type of torque or friction hinge that uses high tension wires to keep the two haves of a display together. In addition to solving the problems above, the hinges will supposedly also allow free-stop 360-degree rotation at any angle, without the need for locking mechanisms. 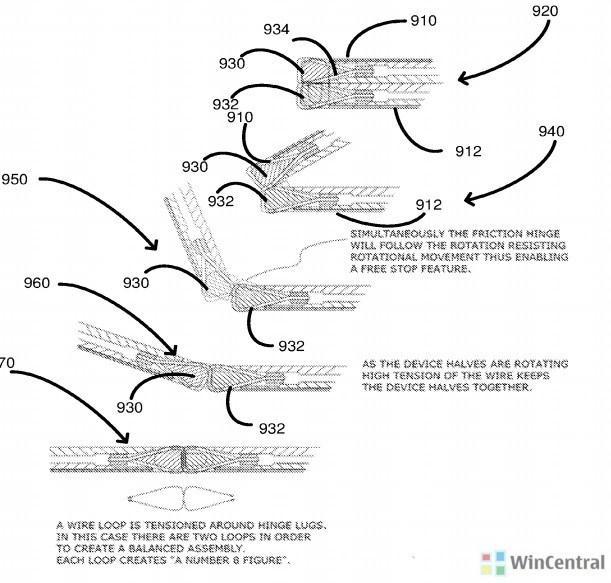 But the biggest problem of foldable phones is actually one of purpose. Who needs such an odd contraption anyway? It sure is fancy and curious but is it practical? More importantly, is it needed at all?

Microsoft’s patent says yes. The demand for larger screen estate on phones have given rise to bezel-less displays with 18:9 ratios or more. But one can only take that so far without turning the phone into a tablet. Unless you can actually turn the phone into a tablet while still retaining is phone size. And that is exactly where Microsoft still to be created foldable “Surface” phone will come in.