Today while in wait before the Microsoft “Major Announcement” media event began, the screens up front showed no less than what we may well have called early on: tablets. The sounds of Gotye brought on bright shapes and clear 16:9 ratios in rectangles pushing up and down the screen at Milk Studios as we awaited what we’ve been tipped (before the event) would be either a Windows 8 Surface device or a Windows RT tablet. It’s that or a new Xbox handheld, ladies and gentlemen.

We’re seeing screens with one solid rectangle and one dotted-line rectangle, one next to the other. Either this is a dual-screen tablet (probably not) or we’re going to see some conceptual software with mirroring action. Or a virtualization of Windows 8 in some form or another. Bright lights and black and white outlines galore! 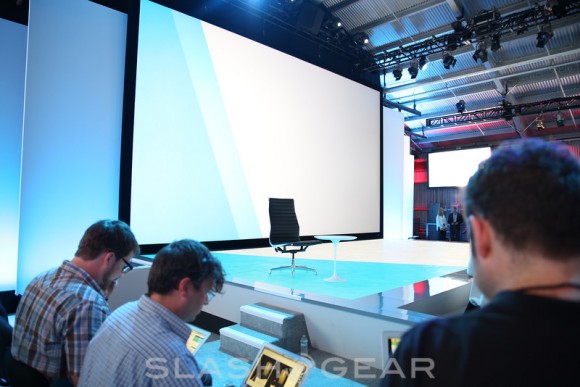 Of course there’s still always the idea that this could be a software release. Stay tuned as we continue down the rabbit hole with Microsoft presenting their next big thing. Have a peek at the timeline below as well to see what we’ve seen thus far as well as what we’ve had leaked, tipped, and plain-old delivered in full-on clear fashion. And wait for the fashion as well, folks, because this is a rather big-time high-design and fashion extravaganza of an event if ever we have seen one!