Microsoft HoloLens gets productive with Outlook Mail and Calendar

The common perception of virtual, augmented, and mixed reality is that they mostly cater to fun and games and entertainment. Microsoft, however, wants to banish that prejudice, at least for its brand of mixed reality. On the heels of the first major update to Windows Holographic, its version of Windows 10 for the HoloLens, Microsoft is proudly announcing the arrival of the Outlook Mail and Calendar app on the HoloLens, allowing users to pin their emails and calendars on a wall, almost literally, and have it always within sight.

Some productivity gurus might actually frown upon that line of thinking, as a nagging visual reminder of undone things might overload the brain. Still, to each his or her own when it comes to workflows. At least Microsoft now gives HoloLens users the option to inundate their eyes if they choose to do so. And they can do it in hi-tech style, too.

Having Outlook in HoloLens is actually just a small next step in this regard. Microsoft revealed in its BUILD 2016 conference last month Office apps working in its mixed reality environment. While preaching the many productive things the HoloLens can be used for, Microsoft is really also demonstrating the desired effects of its Universal Windows Platform efforts. One UWP app to rule them all, so to speak. 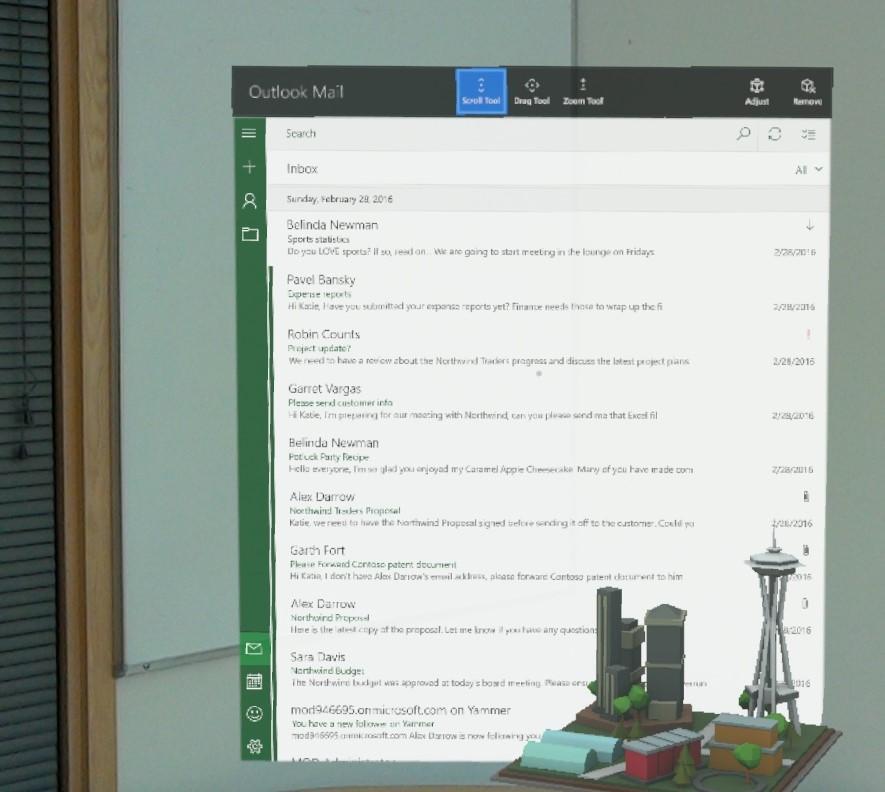 Mixed reality, or MR, proponents like Microsoft, Magic Leap, and Meta poise their systems more for generic computing purposes to eventually replace conventional computers in the not so distant future. There are some attempts on the VR front to also have this kind of experience, though those are limited by how virtual reality works in contrast to augmented and mixed reality.

Of course, it’s going to take a while before any of that becomes ready for even the most tech savvy of consumers, but at least now you can mark that date on your virtual Outlook calendar on your real-world wall.