For years now, Microsoft has been fighting what really feels like a losing battle against Google and Mozilla, two big players in the internet browser space. Though Microsoft Edge replaced the oft-disparaged Internet Explorer in Windows 10 – and, in fairness, makes its share of improvements – a lot of people out there still prefer to stick with Chrome or Firefox. How do you get those people to give Edge a chance? It’s clear Microsoft doesn’t know, because it’s resorted to using annoying pop-up warnings when users try to install another browser.

As reported by The Verge, Microsoft has inserted these pop-ups in the latest Windows 10 test builds that are now available to Windows Insiders. Microsoft trying to tempt people back to Edge through alerts like this isn’t really anything new, but this time, the pop-up shows when you open the installer for another browser. Microsoft, in other words, is trying to steer people to Edge before they even have a chance to use something like Chrome or Firefox. 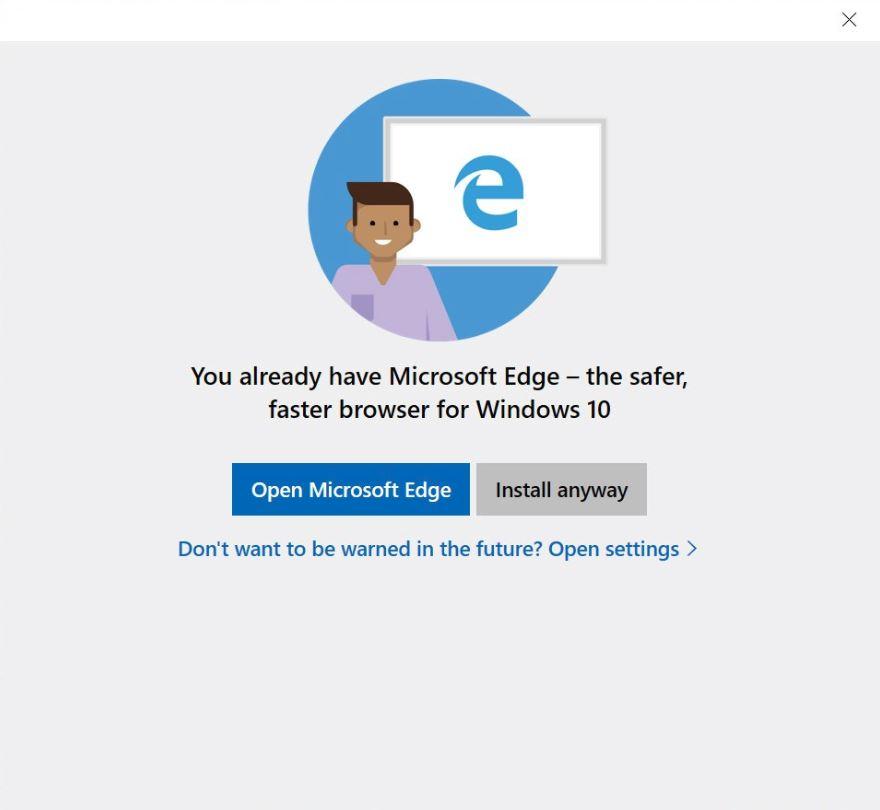 An image of the offending pop-up was shared in a tweet by user Sean Hoffman. It shows a smiling person standing in front of the Edge logo, leading what is presumably their best life now that they’ve broken free of Chrome and Firefox. “You already have Microsoft Edge – the safer, faster browser for Windows 10,” the pop-up reads, with accompanying buttons that either open Edge or proceed with installation.

While it’s hard to imagine many people being scared away from installing Chrome or Firefox because of this pop-up, it’s still an annoying thing to deal with. It’s particularly bold for Microsoft to surface this pop-up as soon as you try to launch the installer for another browser as well, and we can’t really see its existence sitting well with the larger Windows 10 userbase. At least Microsoft gives you the option to turn off warnings like this, but that doesn’t make the situation much better.

The big question now is whether or not this pop-up will make it to general release, as it’s only present in a beta build for a future update. Time will tell, but even if this pop-up never makes it to a live version of Windows 10, it’s clear that Microsoft is looking for new ways to scare people away from Edge’s competition.