This week a collection of Xbox Live Gold members are seeing bits and pieces of the next generation of the console with Xbox One-exclusive wares. One of the items up for grabs – for the most loyal of gamers – is the entirety of Killer Instinct for Xbox One unlocked. For those of you not following the release of Killer Instinct for this console: it’s a free game anyway – this unlocking just allows you to play the full collection of characters without in-game purchases. 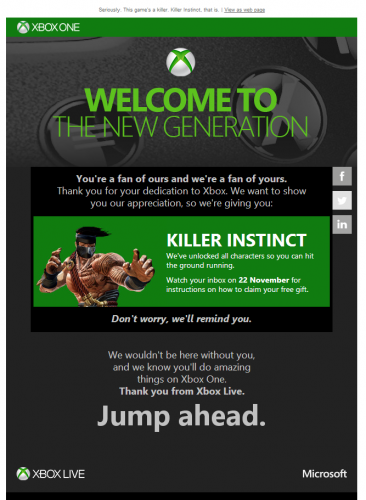 The source of the note on Killer Instinct suggests that Xbox Official marks Gamerscore, Xbox Live tenure, and “other factors in markets where #XboxOne is available” in sending out the Killer Instinct “welcome to the new generation” note. John Caboose says he’s got 7 years of Xbox Gold under his belt along with the highest tier on Xbox Live Rewards for achievements unlocked.

Oh, and he’s pre-ordered an Xbox One and gotten the Xbox One preordered achievement, of course.

So keep that in mind, Xbox Live users – connecting your accounts and letting Microsoft know how dedicated you are to purchasing their wares can indeed have positive effects on your game library. We’re expecting more odds and ends like this to appear before the November 22nd console launch – stay tuned!