MG recently unveiled a new electric concept car in Shanghai called the MG Cyberster. The concept car is a very sporty-looking two-seat roadster that has futuristic styling inside and out. Most will recognize the MG name for producing some very interesting and very small roadsters that are considered classic vehicles today.

The Cyberster is a two-seat, two-door all-electric sports car meant to blur the boundaries between traditional mobility and e-sports entertainment. That is certainly a strange crossover, but one look at the design of the exterior and interior of the car, and anyone can see it looks like something out of a videogame. The car uses what MG calls “Magic Eye” headlamps meant to remind of the round headlamps that are part of the iconic design of its classic roadsters. Since the vehicle is all-electric, it needs no grill but has one that has evolved into an aerodynamic duct that leads to the front wheels.

The interior is highly stylized and certainly looks like something fit for a concept car. It has an interior called “digital fiber,” with the design theme meant to be driver-centric with left and right separated cockpit designs. The instrument panel is a large LED with a second central screen with all controls handled via touch.

While touch controls look good on a concept car, in the real world, most people prefer actual knobs and buttons because they can be used by feel rather than having to look at the screen. The Cyberster concept uses an upgraded version of a module-less battery technology promising a driving range of 800 kilometers per charge. MG also promises the vehicle will be very fast, reaching 100 km/h from a standstill in less than three seconds. 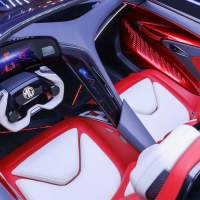 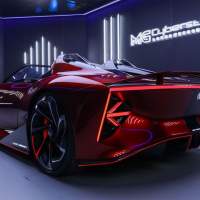 Autonomous technology is integrated with the Cyberster, supporting level 3 autonomous driving and the ability to be upgraded actively as new features intact are available. The over the air updates will use 5G connectivity. It’s unclear at this time if MG plans to move the Cyberster into production.