Mercedes reveals the bodyshell for the new Mercedes-AMG SL

Way back in 1952, Mercedes designed a filigree space frame bringing low weight and the highest possible torsional rigidity that resulted in the first SL. Originally, that filigree space frame was designed for racing and was eventually developed to provide the foundation for the production SL model in both coupe and roadster versions. Later this year, Mercedes-AMG is set to reveal an entirely new architecture for the SL.

The architecture will use a lightweight composite aluminum chassis that Mercedes says will provide the basis for precise driving dynamics, high comfort, optimal packaging, and sporty body proportions. The Roadster uses an aluminum space frame with a self-supporting structure. Mercedes is clear that the new aluminum chassis was designed literally on a blank sheet of paper, just as the first SL was designed in 1952.

Mercedes says not one single component for the new SL model was taken from the outgoing SL or the AMG GT Roadster. Mercedes says it challenged its development team for the bodyshell to undertake the overall development of the new SL without building on any existing structure. The result, according to Mercedes, is a design that reconciles the high packaging demands while achieving excellent rigidity values in all areas along with a favorable weight providing the basis for exceptional comfort and agile driving dynamics.

The chassis has a basic 2+2 seat layout with the potential to accommodate a range of drive systems. With Mercedes and most other automakers pushing towards electrification, we can expect fully electric and hybrid versions of the new SL when the car debuts. Mercedes had some design targets for the team that resulted in choices of intelligent material composition, including aluminum, steel, magnesium, and fiber composites to ensure rigidity and reduced weight. The system includes aluminum thrust panels on the underbody and function-integrated struts the front and rear. 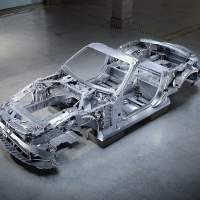 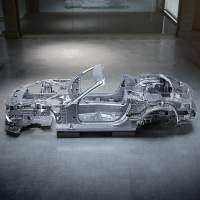 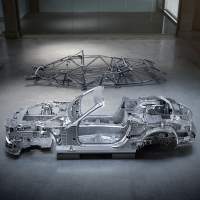 The instrument panel support is made from magnesium, and part of the front module cover bridge is made out of a fiber composite material that using glass fibers and carbon. Engineers also developed the windscreen using high-strength, hot-formed tubular steel and a safety rollover system behind the rear seats that extends extremely fast to provide rollover protection. The resulting chassis weighs about 270 kilograms without any add-on assembly parts, doors, bonnet, or boot lid. It’s unclear when the new SL will debut, but it will be produced at the same plant where the outgoing SL is built.