MegaUpload’s takedown by the numbers

Believe it or not, it was and is possible to track the traffic that MegaUpload and the rest of the piracy-laden file-sharing groups out there have compared to the rest of the web. A series of studies have been conducted by a few sources we’re checking out today and the results are staggering, depending on how you look at it, with the first giant being the one hour following the January 19th raid of MegaUpload. In that one hour, the entirety of the Internet lost between 2 and 3 precent of its total volume in traffic.

This first statistic comes from a report from DeepField Networks called File Sharing in the Post MegaUpload Era. This same study had MegaUpload downloads representing no less than 30-40% of all file sharing on the internet. As MegaUpload’s own MegaVideo and the other biggest sharer of files after that, Filesonic, both shuttered their doors effectively on January 18th, their percentages (34.1% for Mega and 19.1% for Filesonic, if you’d like to know) were distributed amongst the rest of the next biggest hosts. According again to DeepField, “MegaUpload sprawled over more than 1000 servers and 25 petabytes of data in Carpathia facilities.” That’s an intense amount of copies of Skyrim, that’s for sure. 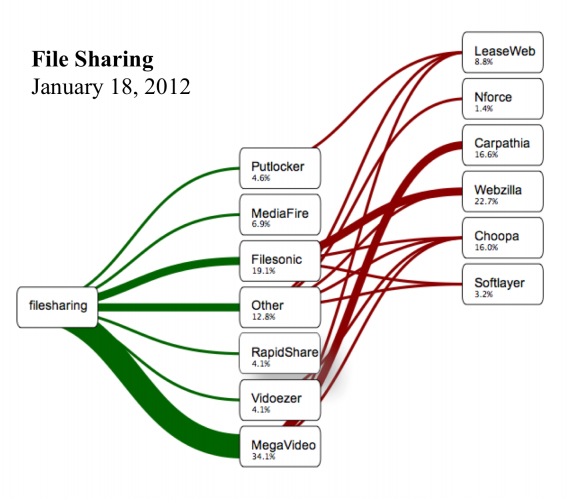 On the 19th of January it was Putlocker up top with nearly 30% of all the file sharing on the web with several services next in line like MediaFire and NovaMov. Both the graphics you see above and below come from DeepField. 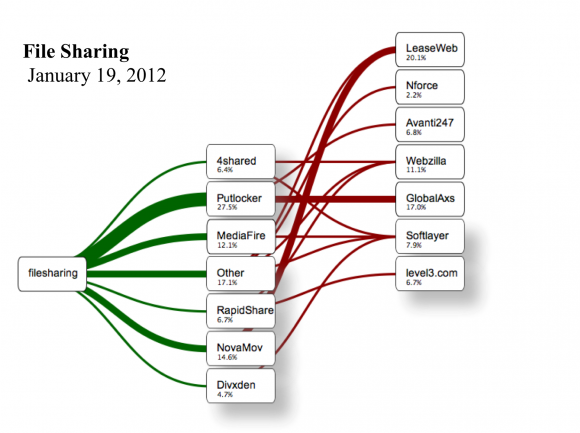 What we’re seeing here is the spread of the wealth to many disparate sites rather than one titanic monster in MegaUpload. This hasn’t been a pretty site though, as TorrentFreak reports not just a few sites shutting down in the wake of MegaUpload: Filesonic and Fileserve banned third party downloads, Uploadbox.com and X7.to have shut down entirely, VideoBB and VideoZer have changed their programs drastically.

According to Sandvine, Megaupload accounted for roughly 1% of total traffic to fixed access networks in North America, and that does not include the rest of the affiliate sites MegaVideo, MegaPix, MegaLive, and MegaBox. What’s happening now instead of that massive bulk of traffic coming out of servers here in the USA, the shift is going towards groups like Putlocker, NovaMov and MediaFire, each of these with data based in Europe for the most part. So though file sharing may have taken a hit when MegaUpload was knocked out, the sharing remains – it’s just coming from over the ocean.