Let me share with you a story of positivity in the global monster game Pokemon GO. Thanks to the Pokemon GO player known to Imgur as Acentrella, we’ve been introduced to the epic and unforgettable Wild Joker. If Jeffrey “The Dude” Lebowski lived in Arizona in the year 2016, there’s little doubt in my mind that he’d be in a situation much like the Wild Joker.

This fellow is retired and spends all of his time – so he says – in the park smoking and playing Pokemon GO. Sort of what you’d imagine a hobbit might do if introduced to our modern world. While the general public stays addicted to their smartphones, likes, shares, and social networking, this guy pulls something positive out of the fray.

Discovered and shared by Imgur user Acentrella (pictured above), WildJoker (or WildJoker1111), seems to have life all figured out. He doesn’t get stressed about the state of the union. He’s not wasting away at home watching television. That’s not what the Wild Joker is all about.

I suspect that this is the sort of person that Pokemon GO’s creators didn’t expect to attract. At the same time, this is the sort of person Niantic should be proud of. Not just because Wild Joker isn’t the intended audience of the original Pokemon brand, but because they’re doing some good in the world. The crew at Niantic have done the simple deed of giving this man something he genuinely enjoys.

ABOVE: I like to imagine Wild Joker as having the affectations of The Dude and the voice of Sam Elliott. See if it rings a bell for you, too.

According to Accentrella, his first encounter with Wild Joker began in Chaparral Park in Scottsdale, Arizona. There he saw a man – a very unique sort of man. A man that enjoys his Pokemon GO more than most.

“Off in the distance, shaded by a grove of trees, is a white haired hippie looking dude on a bench,” wrote Accentrella. “His cane lays quietly beside him, he’s concentrating on his phone with a blunt in his mouth. I hear familiar bleeps and bloops faintly from his hands, matching the occasional puff of smoke whispering away from him.”

“I approach carefully, but audibly, so as not to startle him,” said Accentrella, “[saying] ‘Hi, are you Wild Joker?’ ‘I am,’ he says, casually over his shoulder.” After suggesting that Wild Joker’s player level was high enough to assume he was a ‘bot’ player playing on automatic, Wild Joker responded saying, “Nope, legit 38, man. I just never leave the park!” 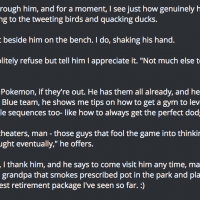 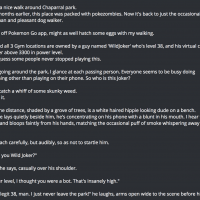 The full story as written by Accentrella can be found in the gallery above for those that want to read the added details. Therein lies a tale the likes of which we’re hoping isn’t unique. If only everyone were so friendly.

For those that wish to contribute their own positive story about Pokemon GO, please let us know! Hit up our @TeamPokemonGO Twitter portal to tell us about a good time you, the reader, have had playing this epic, world-spanning game. We’d love to share it!