Each year when spring arrives in southern Mars, a strange cloud of water ice emerges near the extremely tall Arsia Mons volcano. The cloud stretches for hundreds of kilometers before it fades away over hours. Researchers have been performing a detailed long-term study of the phenomena and has discovered the secret of the elongated cloud using observations from the Mars WebCam on the ESA Mars Express spacecraft.

One of the puzzling facts about the mysterious cloud is that Arsia Mons is the only low-latitude location on the Red Planet’s surface where clouds are seen. Another oddity is that there are numerous similar volcanoes in the region that don’t have similar clouds at this time of year. Observing the cloud poses a challenge to researchers because of the fast, changeable dynamics of the Martian atmosphere and the constraints of spacecraft orbiting the planet.

Researchers relied on the Visual Monitoring Camera, or VMC fitted to Mars Express, to overcome those challenges. Originally, the camera was installed on the spacecraft to visually confirm that the Beagle 2 Lander had successfully separated from Mars Express in 2003. The camera was then switched off but was reactivated several years later to gather images of Mars for public engagement and outreach.

Recently, the VMC was reclassified as a camera for science, and while it has low resolution, it does have a wide field of view. A wide field of view is essential for seeing big pictures at different times of the day and for tracking the evolution of a feature over long periods and in small time steps. That allowed the researchers to study the whole cloud across numerous lifecycles. 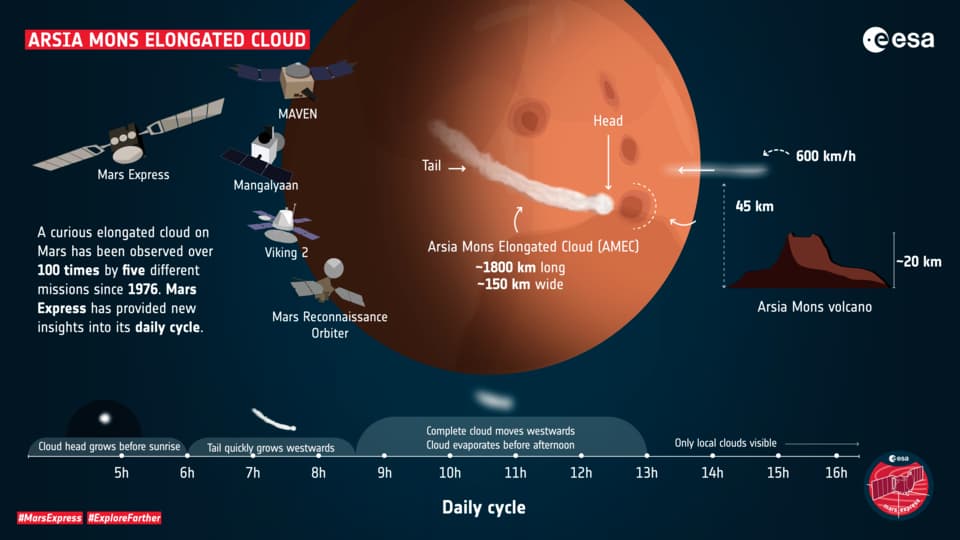 Using the data, the team discovered the cloud measured about 1800-kilometers in length and 150-kilometers across at its most extensive. It’s the largest orographic cloud ever seen on Mars. It forms as a result of wind being forced upwards by features like mountains or volcanoes on the planet’s surface. In this instance, Arsia Mons, which stands 20-kilometers tall, disturbs the Martian atmosphere triggering the cloud’s formation because moist air is driven up the flanks of the volcano during updrafts and condenses at higher and cooler altitudes.