Nintendo has released many successful games over the years. And while some games do get updates once in a while, they’ve really stepped up their game for Super Mario Maker. Since it was released, Nintendo has rolled out two major updates for the game, bringing a host of new features. Plus, they keep releasing new costumes on a pretty steady basis. Well, today they’ve announced another big update.

We’re slowly approaching the point where you can recreate most of the levels from half a dozen Mario games now. The biggest change in the forthcoming update is the ability to make locked doors. The idea of locked doors originally showed up in Super Mario 2, (well, the Western version of Mario 2, at least). You’ll need to find and carry a key to the door, in order to open it.

The key can be hidden in a location, or even given to a boss. This means for the first time, you can make a boss fight mandatory, for finishing your level. That’s a pretty exciting feature. You can also create pink coins which, when all are collected, will generate a key. If you add this element to your level, your players will need to find and collect them all before they can move on to the next area.

The other new element for your levels is the Skewer, from Super Mario World. You know, the big spiky poles that come out of the ceiling or wall, that shoots all the way to the other side of the screen. If you shake a Thwomp, it will now turn into a Skewer. 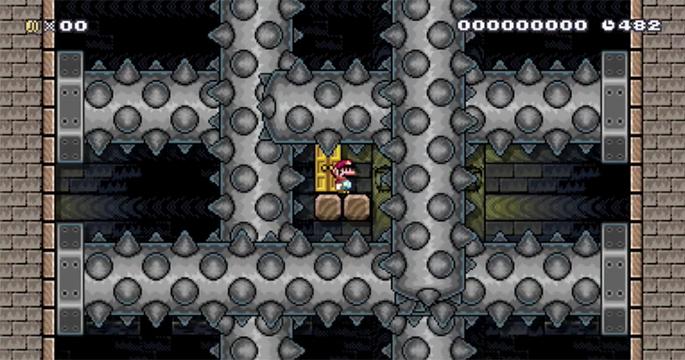 For those more interested in playing, instead of creating, there’s a new “Super Expert” mode. You’ll be able to go through the 100 Mario challenge again, but this time it will be even more…challenging. Once completed, you’ll get access to 6 brand new levels, which unlock new secret costumes.

The new update is due out March 9th, and as with all of the Mario Maker updates, will be free.